July 14, 2012
It is being reported tonight that Condoleezza Rice is leading a short list of potential Vice Presidential running mates for Obama White. That the Romney campaign would even float such an idea confirms how very out-of-touch Mitt Romney is with the conservative base of the Republican Party, particularly Christian conservatives.

Here in South Carolina, those of us who have been alienated by the GOP establishment's imposition of a Massachusetts liberal as the party's nominee, have the luxury of casting a protest vote knowing that our South Carolina electors will not be voting for Barack Hussein Obama. However, there are many battleground states where the Republican base will be looking for a sign from the Etch-a-Sketch candidate that he might actually govern like the conservative he now claims to be. The selection of Condoleezza Rice will make clear this is a Nelson Rockefeller-Christie Whitman-Lindsay Graham kind of Republican. The suggestion is an affront to the majority of Republicans who voted in the primaries for a candidate other than Romney.

It is establishment, liberal Republicans who brought America the tragedy and ruin of the Obama administration. Those Bush Republicans are deservedly anathema to millions of Americans. A choice such as this should be first among many reasons for Republican delegates to abandon this doomed candidacy and select a candidate with broad national appeal.

Four years ago, when another RINO was floating the idea of Rice as a running mate, we posted the following column by Janet Folger. If there are any sane political consultants advising the Romney campaign, we hope it will serve as a warning.


My 'Mild' Opposition to Condi Rice for VP 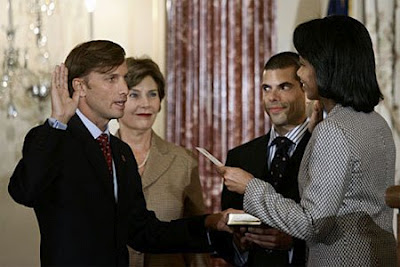 From WorldNetDaily
By Janet Folger

Secretary of State Condoleezza Rice is making the rounds vying for vice president. Last week, she paid a visit to Grover Norquist's Americans for Tax Reform coalition meeting. I quit going to that meeting about a decade ago when Ann Stone of "Republican's for Choice" sat three seats away from me straining to hear our pro-life activities so she could try and stop them. Some tents are just too big.

By the way, Norquist, who often describes his position as "guns good, taxes bad" (something upon which most conservatives agree), after speaking for the Dallas Log Cabin Republicans, might want to update his introduction: "Homosexuality good, Marriage bad," since his event was the biggest fundraiser of the year for the group that fought against marriage while it was on the Texas ballot in 2005. I like to strategize with people who want the same things — the very reason I don't attend meetings at Obama headquarters. But I can certainly understand why Condoleezza stopped by.

I am a Republican because of the principles in the party spelled out in the platform. I will remain one until the Republican Party ceases to stand for my beliefs, including the basic principles of life, marriage, less government and a strong defense. And when candidates violate these basic principles, I simply will not vote for them — even for vice president.

Secretary of State Condoleezza Rice described herself as "mildly pro-choice." Let me first say, there is nothing "mild" about having your arms and legs ripped off your body in that "choice" we call abortion. Use any rhetoric you'd like, if you favor abortion, you still have a dead kid — 4,000 of them a day, actually, killed in the most non-mild ways imaginable.

Nothing particularly "mild" about Stephen Douglas being "pro-choice" when it came to slavery, either. No, the Republican Party was the one to stand against slavery even when candidates tried to hide behind the "pro-choice" (for the slave-owner) rhetoric.

Washington Times White House correspondent Bill Sammon pressed Rice, "But it sounds like you do not wish to change the laws that now allow (abortion). ..."

Rice responded, "Well, I don't spend my entire life thinking about these issues. ... What I do think is that we should not have the federal government in a position where it is forcing its views on one side or the other."

If Lincoln held that position on slavery, we'd probably still have slave states today. We certainly wouldn't have an African-American secretary of state, that's for sure.

Beyond being wrong on the prerequisite issue of life, you won't believe what else she's wrong on. Austin Ruse, president of the Catholic Family and Human Rights Institute, summarized Rice's activities as head of the State Department with a Dec. 28, 2006, letter protesting the U.S. vote to give three radical homosexual groups official U.N. status.

Among the homosexual groups who were granted official "NGO (non-governmental organization) U.N. status was the Danish National Association for Gays and Lesbians, which supports homosexual "marriage," forced homosexual adoption and laws that would force churches to "bless" homosexual unions. Under Rice's direction, the U.S. also voted to recognize the International Lesbian and Gay Federation, which was linked to the North American Man/Boy Love Association and has refused to condemn adult-child sex.

Nothing "mild" about pedophilia, either. Forget going after child molesters; let's give them official status at the U.N.! Good one, Condi.

Rice then introduced first lady Laura Bush to Dybul's domestic partner's mother as Dybul's "mother in law." This is only "mildly" at odds with the Federal Defense of Marriage Act (which even President Clinton signed) declaring that the federal government shall not recognize "marriage" between two men. Obviously, Secretary Rice doesn't "spend her entire life thinking about federal law" on that issue, either — "mildly speaking."

Seems Rice is so anxious to recognize homosexual "marriages" that she can't even wait for her radical homosexual U.N. efforts to take effect. Maybe she'd do better at Obama headquarters.

Not to mention her "road map for peace," which has "mildly" negative consequences for the survival of Israel, forcing the Jewish state to give up even more strategically significant land for promises of "peace" from "mild-mannered" terrorists and their mildly fanatical pursuit of world domination and the eradication of Israel from existence.

On my radio program yesterday, I was questioned about exposing the secretary of state's position without first going to her directly. Oh, I've already done that. I asked her to re-examine her radical abortion-on-demand position when I saw her at the inaugural ball back in 2001. I didn't have time to get to the rest.

Let me just summarize it for you: I am categorically, vehemently, emphatically and intensely opposed to Condoleezza Rice for vice president ... to put it "mildly."