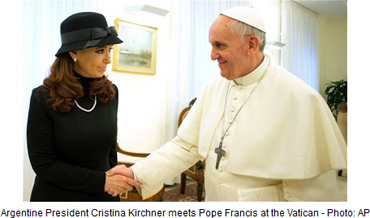 Cristina Kirchner, the kleptocrat, socialist leader of Argentina, has an approval rating in that country that only Jimmy Carter might envy. She also has had a contentious history with the new Pope over social issues such as same-sex "marriage" and abortion. Kirchner's late husband referred to then Cardinal Bergoglio as "the Leader of the Opposition," and the Kirchner's once leaned on the new Pope's Jesuit superiors and had him exiled to a small northern village where he served as a Math teacher. But what a difference a Conclave makes. Today, swathed in black, Kirchner appealed to her one-time adversary to help her gin up international pressure on Britain, that she might surrender to Argentina territory that was never Argentina's.

We have every confidence that a smart Jesuit sees what so many of Kirchner's countrymen have come to see – that all the noise coming from Kirchner is merely the political death-rattle of a corrupt politician attempting to divert attention from her nation's real problems. She seeks to rub raw nationalist resentments and anger about the defeat meted out to Argentina's murderous military junta when they launched an unprovoked invasion of the Falkland Islands thirty years ago.

The Pope is surely aware that in recent weeks 99.8% of Falkland residents voted to remain British. As head of a worldwide church of 1.2 billion souls, the Pope must also be loathe to offend and alienate The Commonwealth of Nations, a peaceful, positive force for good in the world, and a family of 54 nations comprised of 2.2 billion souls, that also happens to be headed by the Supreme Governor of the Church of England, Her Majesty Queen Elizabeth II.

All of this saber rattling on the part of the Argentine regime could easily be ignored were it not for the fact that 256 British, 649 Argentines, and 3 Falkland Islanders have already died as a result of selfish and desperate politicians in Buenos Aires.

The Pope should intervene in this controversy. Indeed, he is in a wonderful position to discredit the third-world autocrat who came calling today, along with her undemocratic and anti-Christian agenda. He could end a corrupt and oppressive regime while defending the self-determination of Falkland residents, including the 10% who are Catholic. It would be a small but meaningful step toward a more just and peaceful world.