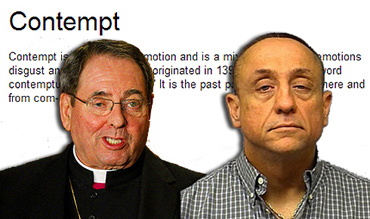 The disgraced and discredited Archbishop of Newark, John J. Myers, has lashed out like a cornered rat at his critics, the media, politicians, members of the clergy and even the families of victims whose safety he utterly disregarded. In response, today's Star-Ledger rightly states that "it boggles the mind that in 2013 an archbishop would dare speak of families like this."

It boggles the mind, indeed, that any Christian leader would be allowed to wreak the destruction this man has caused in the Archdiocese of Newark. His haughty contempt and refusal to meet with anyone disagreeing with him is well known, but the irreparable damage he has caused to peoples lives, to the salvation of souls driven out of the Church, to the Church's institutions like the approximately 70 schools closed by Myers, and the scores of once vibrant parishes now boarded up are testament to a pompous ass who seeks not to serve, but to be served.

His only apparent defender appears to be Bill Donohue of the Catholic League. Since it is well known that Donohue speaks for the Catholic hierarchy and certainly for his own Archbishop, Cardinal Dolan, who also presides over the United States Conference of Catholic Bishops, one must ask, how much damage will this unstable narcissist be allowed to wreak before any bishop here or abroad speaks out? What price will they pay? Bishops like Myers have already cost the Church more than $2 billion. Have they no moral responsibility beyond loyalty to a brother bishop? They may wish to ponder the words of Saint Ambrose: "Not only for every idle word,but for every idle silence must man render an account."

Thanks be to God for the Star-Ledger for exposing the corruption. That newspaper's editorial board published today a succinct and excellent summary of this ongoing tragedy in Newark; but it is in the comments to the editorial, linked here, where one can grasp the pain, alienation and justified anger felt by those who expect their bishop to mirror Christ and the Apostles, not a crime boss.


Last weekend's letter from Newark Archbishop John J. Myersregarding his handling of sexual abuse cases is so crowded with falsehoods and insults that it's difficult to know where to begin.

What's most revealing is what is missing: There's not a single word of sympathy for the victims and their families. Myers instead insults them by suggesting they are blaming the church for problems in their own families. "One can understand when family difficulties lead parents, even by conjecture, to blame someone outside the family," he wrote. "But conjecture is no reason to undermine the Ministry of individual Priests (or Bishops for that matter.)"

It boggles the mind that in 2013 an archbishop would dare speak of families like this. But it is vintage Myers. While many bishops are working hard to rehabilitate the church, he offers only haughty disdain for those who question his judgment.

This time, he calls his critics "evil, wrong, and immoral" and suggests that they may burn in hell: "God will surely address them in due time."

The latest damning information comes from a lawsuit the church recently settled for $1.35 million. It accuses Myers of ignoring a credible accusation against a priest on his watch. The lawsuit claimed that the Rev. Thomas Maloney went on to repeatedly abuse an 8-year-old boy.

In his deposition, Myers says he never saw written warnings that went to the diocese, perhaps because of his "slipshod" filing system. If that were true, if it was an innocent mistake, you would expect Myers to offer a heartfelt apology to the victim and his family for his failure to red-flag these cases. Instead, he has refused for years to meet with them.

In his letter to the diocese last weekend, Myers concedes that Maloney gave him gifts, but mentions only one: "I recall that he once gave me a coin of minimal value, of which he had several examples."

The court records tell a different story. Thank-you notes from Myers describe a steady stream of valuable gifts, including gold coins, silver, a "much-loved" camera and undisclosed amounts of cash, which Myers said he would use to gamble at the racetrack.

Put aside these small falsehoods and insults. Because they mean nothing when measured against Myers' failure to safeguard children.

Maloney is just one case. While in Newark, Myers allowed the Rev. Michael Fugee access to children even after Fugee confessed to repeatedly groping a boy's genitals and signed a legal agreement to stay away from children. Last year, he placed an accused priest in a parish in Oradell without telling parishioners.

In 2004, Myers wrote a letter of recommendation for a priest one week after learning the priest had been accused of breaking into a woman's house and assaulting her. The same year, he banned another priest from public ministry after investigating an abuse allegation, but did not notify lay people or other priests. In 2007, he did not tell lay people about a credible finding of molestation against a priest working in Elizabeth and Jersey City.

Myers just doesn't get it. His complete lack of repentance underscores the need for him to resign for the sake of children's safety.