June 3, 2019
Glenn Greenwald recently contemplated the case for obstruction against President Trump by noting that "when the question is whether a President sought to kill an Executive Branch investigation the determinative issue is whether he did so because he genuinely believed the investigation to be an unfair persecution and scam, or whether he did it to corruptly conceal evidence of criminality. That Mueller could not and did not establish any underlying crimes strongly suggests that Trump acted with the former rather than the latter motive."

As confirmed via WikiLeaks Vault 7 information drops, the extraordinary capacity of the CIA to infiltrate and ruin the life of any American deemed unfit for a new world order is the real story that underlies the whole case against Trump and his associates. The spying capabilities of our intelligence agencies ultimately render even the most vigilant among us vulnerable to "hacking tools designed to compromise products ranging from cars and televisions, to web browsers and cellphones."

These are the pretenses upon which a Deep State campaign to delegitimize a presidency was born. Various abuses of governmental power were utilized to trap and intimidate innocent men with threats of imprisonment so a preconceived outcome might be achieved. When it became clear that a favorable conclusion could not be reached without revealing the full seditious intent of these Deep State actors, a politically tainted report was shamelessly put forth to keep the focus on the presidential scapegoat.

The Deep State establishment were essentially banking on having people loosely associated with anything remotely connected to a Russia collusion narrative, including the unjustly maligned WikiLeaks, admit to things they had absolutely no part of. If any of these men, including President Trump, did commit anything resembling obstruction, it's merely because he was attempting to avoid the same type of surveillance traps and intimidation tactics used against Michael Flynn and Jerome Corsi.

Greenwald righteously concludes that Mueller's inability to find that Trump had engaged in illegal activity also made "it virtually impossible to find that he criminally obstructed the investigation." Scam over, case closed.

For further reading from Sharyl Attkisson...

I'm not saying Trump is not guilty of something, and I'm not saying he's possibly anything more than a lesser evil compared to a Hillary presidency, but I'm concerned with our whole system. If a Trump presidency, by default, exposes more of the corruption, that's ultimately a good thing. But I don't see him changing the ultimate direction of our country toward a deep state, globally run, nanny/military state. So what good is all this exposure if everything ultimately remains status quo? It all ultimately feels like a big distraction.

Case in point, despite obvious abuses, in January of 2018, President Trump signed a six-year extension of "702" wireless surveillance authority. He also signed off on the bump stock ban and fully funded Planned Parenthood. Obamacare continues to put private practices out of business and it hasn't been properly adjusted so doctors can practice without the government trying to enforce a death panel approach to control costs as per my own general practitioner (that's not exactly how he worded it). And despite all the chaos and the turmoil caused by the homofacist LGBT, Trump managed to get in a shout-out... 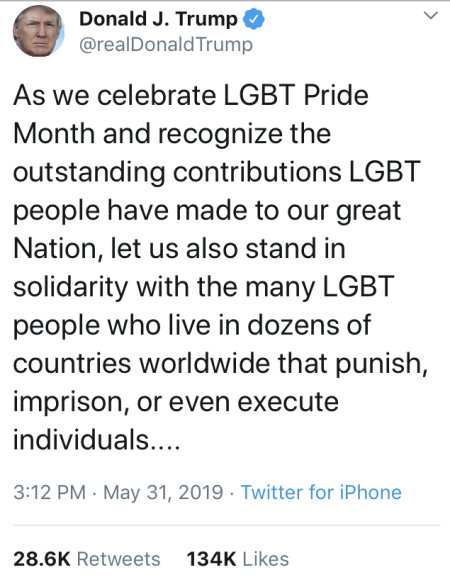 So the deep state will continue to get more control, regardless of who is in the Oval Office, unless we throw out the bastards. I'm not recommending a revolt, that's not my style...

At best, Trump is slowing some of the agenda down a bit, but 2030 is the global agenda roll out target date... https://www.un.org/sustainabledevelopment/development-agenda/

Rand Paul on the evils of socialism: