Bonnie Chernin
The Reproductive Health Act is deadly, and too many Americans are silent 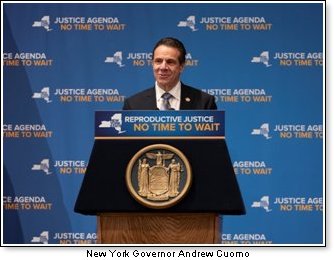 On Monday, January 22nd, 2019, the Reproductive Health Act was passed in the NY State Assembly and Senate and immediately signed by Governor Andrew Cuomo. There should have been a reaction in every neighborhood throughout the city and state to protest this unconscionable and dangerous law.

With the exception of outraged religious Catholics who protested and signed petitions calling for Governor Cuomo's excommunication, and conservative political and religious leaders and pro-life advocates, much of America was indifferent.

The Reproductive Health Act, or RHA for short, is not healthy and there is nothing reproductive about it. The new law goes far beyond anything Americans imagined when Roe v. Wade mandated abortion in all 50 states.

As a lifelong Brooklyn, NY resident, I am appalled that Governor Cuomo and my elected representatives have officially legalized infanticide. Prior to the voting, I contacted the New York State senator representing my district, Senator Andrew Gounardes and my Assembly Member Jaime R. Williams. My calls were "logged," and I was thanked and told my opinion counts. Then they voted the wrong way.

New York State Senate members cheered and applauded the law. It was disgusting to watch. In a brazen act of arrogance, the governor then had several New York landmarks including the World Trade Center, the Kosciuszko Bridge and the Alfred E. Smith building in Albany lit up in pink to celebrate infanticide. Here in New York, tax dollars are allocated to fund public works projects, including our bridges, tunnels and architectural landmarks. What the governor is doing is shoving his agenda down our throats. He calls this an "achievement."

What would have happened had a pro-life governor signed a law protecting unborn children and then celebrated by lighting up his city's landmarks? Can you imagine what the outcry would be from the hard left? There would reactionaries and demonstrations all over that city.

"The Reproductive Health Act is a historic victory for New Yorkers and for our progressive values," the governor said.

No. Progress is what happens when a baby is conceived and then slowly develops over nine months in the mother's womb. When the baby is ready to be born, beginning his or her journey through the birth canal into the world, that's progress.

Science and 3D/4D ultrasound technology prove that the unborn child has a nervous system and tiny little arms and legs that flail and fight for life while he or she is being torn apart by an abortionist's forceps. When the radical left acknowledges scientific facts, that's progress. Progress is when militant leftists like Governor Cuomo admit that the horrific RHA law they support is to serve themselves and their agenda, not their constituents. But they would never admit that.

For clarity, "progressive" now means infanticide. This is not abortion in anyone's mind. Abortion is a euphemism, just like "choice," termination of pregnancy, reproductive freedom and other products of misconception.

An unborn child can be killed up to the moment of birth, when the baby is exiting the birth canal. The child can be murdered for any reason. The so-called "health" exception is so broad as to be non-existent. "Health" includes familial, economic factors and the woman's age. If the girl is a young teen or a woman claims she has financial difficulties, there will be no restrictions on abortions in the ninth month of pregnancy. Whatever happened to adoption? What happened to common sense?

Non-doctors, such as nurse practitioners and midwives, will now be able to perform abortions. There will be no requirement for supervision by a licensed physician. This will open the door to illegal abortion. Rather than making abortion safer, it will become more deadly and pregnant women's health will be at risk. Under this new law, babies that survive abortion can be left to die.

As for Gov. Cuomo, who is Catholic, a number of New York Catholic leaders have called for his excommunication. Cardinal Timothy Dolan has already stated that this is "not an appropriate response." As I am Jewish, I am not familiar with Catholic doctrine or what forms the basis for excommunicating a member of the Catholic faith. But if signing a bill into law that allows the murder of unborn children up to birth does not warrant excommunication, what does?

Tragically, there are people of all religions, ethnicities and denominations who defend this odious law that murders children. They can be found online on websites like Catholics for Choice and the so-called "Religious" Coalition for Reproductive Choice. There are groups such as The National Council of Jewish Women and the Religious Action Center for Reform Judaism that support this law. They call themselves faith-based, but these are militant hard-left groups. These organizations are well-funded and equally responsible for promoting the evil of abortion. Many of their members have ties to Planned Parenthood and our elected officials.

The RHA law has now made New York the most dangerous abortion state in the country. Other states will likely follow. And all those who supported, cheered and endorsed the RHA law will one day be judged and held to account by a much Higher Authority than the state or federal government.