November 27, 2009
America's Congress has 535 representatives sitting in the House and Senate in Washington D.C. Add to that number one president and 9 Supreme Court justices and we have 545 people in our nation's capital who are supposed to be serving us. We are all very aware of the corruption and mismanagement of taxpayer dollars that has bankrupted the United States of America. We are all aware, as well, that it is the job of these 536 elected representatives and 9 court appointees to protect our tax dollars from being abused or misused. They represent us. At least, they are supposed to be representing we, the people. Their primary job is to protect our interests in social and economic matters, to manage America's budget, to make decisions which will secure America's safety from enemies who might wish to harm us and to secure and protect the rights and liberties of all citizens "for ourselves and our posterity." Our "posterity" means for future generations, as well as our own. So far, they are failing miserably to do their jobs. I'm not the only person who is pointing this out. So is Charlie Reese (click here).

Aside from the lifetime politicians who American lemmings re-elect solely because they're familiar with their last name, we have to be excited that our political system insures that new members of Congress will be elected regularly, and so we, the people have fresh eyes walking into Washington D.C. every election. One would imagine that these fresh eyes would see exactly what is going on in our nation's capital and that those newly elected would act as accountability, exposing whatever corruption or misuse of taxpayer dollars is going on by the greedy, lazy and selfish representatives we've chosen to represent us. 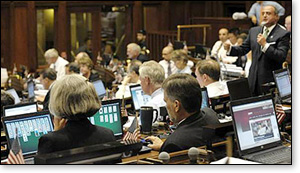 So how often do the newly-elected expose financial mismanagement in Washington D.C.? How many times have we seen a new Senator or Congressman sent to Washington start issuing press releases about what a lack of accountability there is in their new position, or how their expense accounts border on insane in that not only are they all overpaid but that they get free automobiles and free gasoline, huge travel expense accounts that are easily and oftentimes abused and used fraudulently, office credit card accounts that enable them to buy new laptops, pay for their new office and office equipment and staff, and eat every meal at expensive restaurants for free while they are in office? And this is the tip of the iceberg. How about their extravagant health insurance, which covers them for the rest of their lives, and their retirement which gives them full pay for the rest of their lives? Do new Senators ever report back about the insane and excessive spending that each Senator is afforded and allowed to engage in?

How often have we seen those whom we elect to represent us act as a "Sarah Palin," truly looking out for we, the people, rather than taking advantage of the indulgent, unrestrained spending that they discover each Congressperson is allowed, because they all voted to set themselves up with undeserved, unnecessary and extravagant expense accounts? I can give you that number, because I've been watching and paying attention for all of my adult life. According to my life-long observation, that number is ZERO. I personally have never seen or even heard of a freshman Senator or Representative land in Washington and then report back about all of the unnecessary benefits afforded them while they're in Washington D.C.. Nor have I witnessed a freshman Congressperson submit a bill designed to expose and stop the exorbitant, unreasonable personal spending of taxpayer dollars which takes place every day by our elected officials.

We have no choice in this matter any longer. Hoping our elected representatives will have integrity has proven to be a fool's approach. No sooner does a newly elected Congressperson land in Washington and set up their new office complete with staff who do most, if not all, of their work for them, but greed apparently sets in and they appear to forget completely that America is bankrupt, that Congress is solely responsible for our bankruptcy, and that they, the newly elected, are the only real hope that we, the people, have. The newly elected, regardless of their good or noble intentions when running for office, appear to morph like chameleons into greedy, self-serving abusers of the system as soon as they land in Washington.

If this were not so, all of us in America would be able to point to the exceptions to the rule, to list by name those Senators and Congresspersons who did expose the excessive personal spending allowed by our government. We would all be aware of the bills designed to change that abuse of taxpayer dollars, but alas, there is no one noble enough to stand up in Congress or in front of the press and say "This is ridiculous! We are abusing our privilege and taxpayer dollars for our own self-indulgent pleasure and entitlement!"

So the answer is clear. We stop electing lifers. We start electing real people, not attorneys or even business owners, but real people who have had a lifetime of working for a living, who have had to learn how to live within their means, who have been forced to live within a budget  honest, hardworking people with the courage to speak up when they see evil and abuse taking place. We need to stop electing familiar names and instead get off our fat, lazy American butts and start investigating who the candidates actually are so we don't elect another Communist president or Senator or Congressperson who does not represent we, the people, at all.

By the way, I'm willing to go to Washington and help clean House (and Senate). Are you willing to get involved? Start showing up at city council meetings, county Supervisor meetings, and local political party meetings of your choice. Show up, stand up and speak up, and make yourself available. We need real people to go to Washington and clean up at least 40 years of extreme abuse of power and reckless abuse of taxpayer dollars by both the Democrats and the Republicans.

We can do this.