January 26, 2010
Large, obvious to everyone, they make a huge mess and we are all affected by them, yet no one says anything about the elephant in the living room. In America's case, it's elephants  plural  in the living room because we have so many its no wonder our nation is as unhealthy as it is. 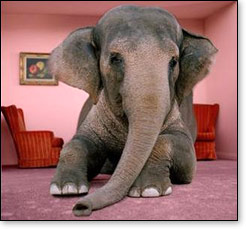 ELEPHANT #1: Let's start with the largest, most obvious elephant that we can call "Politician": Our elected representatives no longer represent us. Neither Democrats nor Republicans represent the people any longer. In the Land of the Free, that should be big news. Have we seen any reporters frantically announcing this on ABC, CBS, NBC, CNN or MSNBC? Not a single word. This is the sort of thing which happens in Communist countries, not in the United States of America. Yet, before we expand on the outrageousness of this first elephant, this leads us automatically to a second elephant: Let's call this second elephant "Media."

ELEPHANT #2: 'Media,' the news media, is not reporting this. It is supposed to be a journalist's job to report the news and the fact that our Congressmen and women are no longer listening to we, the people is big, big news, yet the news media is silent about this huge story. At the risk of stating the obvious, we need to pay attention to this.

If we look a little closer at this second elephant (Media), we can begin to see why it is no longer doing its collective job, and it can be summarized in one word: money. Just like the first elephant, who no longer represents we, the people but chooses to be guided and directed by those who give them money, both our political system and our mainstream news media has been corrupted by greed. A famous community leader long ago said "For the love of money is the root of all evil." He said this a couple thousand years ago, yet this love of money, which has created these first two elephants in our living room (oh, there are more  be patient) is our third elephant in the living room and perhaps  because most of us don't have very much of it (money)  we don't seem to notice this elephant at all. It's best, I think, to just call this third elephant what it is: Greed. 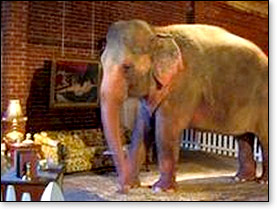 ELEPHANT #3, THE ORIGINAL ELEPHANT: 'Greed' was really the very first elephant in the living room, having given birth to the other elephants named Politician and Media. But for we, the people, in my humble opinion, the disturbing fact that our means of protecting our rights and liberty has been destroyed makes Politician the most alarming elephant in America's living room right now. Greed feeds Politician and Media cleans them both up, but all three are elephants in America's living room and they are destroying everything in their paths.

"All that is needed for evil to triumph is for good men to do nothing." That is as true today as it was the day Edmund Burke first stated it. "The people never give up their liberties but under some delusion" is another Burke quote which, IMO, reflects what has happened since the US government took control over the mainstream media decades ago. Propaganda has created so many delusions in this nation that we only need to look to Washington to see how deluded we've become. More specifically, we were propagandized into giving our nation to radical, ultra leftist Progressives who hate America, hate free markets, who wish to take away our God-given rights and who plan to destroy America by merging the USA with every other nation on the planet through their NWO plans being directed by the Bilderberg Group (more info here: http://en.wikipedia.org/wiki/Bilderberg_Group. Particularly interesting is the quote from founder Denis Healy noted under "Conspiracy Theories." Keep in mind that Wikipedia is notorious for leaning to the ultra-left and even edits Wiki info in order to paint Conservatives as 'bad' and Progressives as 'good.' Large grains of salt are suggested when referencing Wikipedia. Ed.).

So what is America to do? What are real and patriotic Americans supposed to do right now in order to right this sinking ship and bring America back to principled government, friendly neighborhoods, and principled living? That is the good news, and the answer is very, very simple.

PRINCIPLED LIVING AS A WAY OF LIFE: Greed is considered a 'character defect,' along with a multitude of other typical and negative Human behaviors such as jealousy, selfishness, laziness, stealing, dishonesty, lying, gossip, arrogance and other behaviors which tend to destroy, not build, healthy relationships. The way that politicians who hate America's free market system have gotten themselves elected by we, the people is most commonly by lying. Lying, however, is only effective when those being lied to do not know the truth. Media propaganda continues to fill us with misinformation and paint good as bad, and bad as good. What we, the people can do to take our nation back and rid American leadership of those who hate America is by seeking Godly counsel about how to live our lives, for starters. Face it: we've generally become a very selfish nation who no longer thinks about how we might help others. Sadly, 'I, me, my' sums up much of our collective focus in America today.

Fortunately, Mankind doesn't have to cave in to our carnal, selfish nature. Granted, we do cave in, but we don't have to. If we have any interest in becoming men and women of integrity, there is a clear and established path to do so. It's not rocket science. It's not complicated. It's not easy, either. I'll talk about that in my next column, and lay out precisely the path that men and women take who have the desire to take the high road in their lives and become people of integrity.

NEXT: KILLING THE ELEPHANTS IN THE LIVING ROOM