Don Cobb
Let us not forget...

January 8, 2013
Let ours not be the generation that is responsible for millions of valiant patriots dying in vain. Let us not be the people who take for granted the magnificent sacrifice our slain soldiers made for us, on our behalf so that we might be free. Let us not become so complacent in our precious freedom that we allow rights endowed by our Creator, and not by our government, to slip through our fingers so that America becomes just another nation on Earth like any other. For we are not like any other, ever. 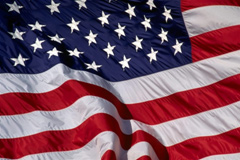 We are the grandest, most powerful and prosperous nation in the history of Mankind. We are the most generous and most helpful nation ever to grace this planet. We have helped more people than all other nations combined to find their way to their own freedom, both personal and national. And we have freed more slaves from tyrannical governments, from men not unlike some of our own leaders, who chose to disarm the citizens of their countries and to take so much from so many that history only remembers them for what wrongs they have done. Names like Mao Tse Tung and Adolph Hitler, Idi Amin, Vladamir Lenin and Joseph Stalin, were but men who chose not the sanctity and protection of their loving Father's arms and instead became ruthless murderers and thugs, feared by their own people.

Our own forefathers revolted against such a tyrannical government who took more from the people than it gave. Our ancestors had the courage to rise up and fight and die for the freedom that every heart longs for and craves and our founders set up the most amazing Constitution ever known to Man which acknowledges that rights don't come from Man or from governments. Rights come from our Heavenly Father, endowed on His people and the only thing that secures these rights is that men and women have been willing to fight for them, even die in order to protect them for us.

Truly, these rights exist today and there are those amongst us who would forget how valuable these rights really are; they forget that men, women and children died in order for us to live as a free people with opportunity which is limited only by our own personal vision or lack of vision. Let us not be like these people who have become ungrateful for their own freedom and instead wish to be coddled and cared for by a government who ultimately — like so many before it — will take far more than it gives. Ironically, what our government takes monetarily is not even theirs. It is our money that it is spending so frivolously in an effort to make as many Americans as possible dependent upon them.

Such a government is only destined to fall, slain one day by another generation of men and women who refuse to give far more than they receive. The only possible outcome, when a government comes to oversee the people rather than the other way around, is bloodshed and fighting, citizens slaughtered by their own nation's army which once protected them. It begins with charity, but whenever a people come to believe they are owed something from their government, it always ends in tyranny and/or revolution. 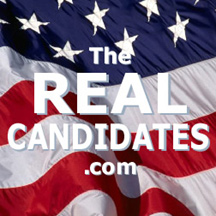 It doesn't have to come to that in America. We, the people have the tools and skills, the ability to control our government rather than be controlled by our government. And those of us who recognize the pattern that is unfolding before us today have an obligation to shout from the rooftops so that our fellow Americans might see the Truth and join us in protecting that from which our freedoms stem. If, in fact, no further shouting is necessary — and I suspect everyone knows who needs or wants to know — then we must get busy organizing and throwing out the politicians who have become the real enemies of the state. At http://theRealCandidates.com I've laid out a very simple, completely free plan which would facilitate We, the People throwing out every politician in office today, if that is what we so desire. It only requires two things of all of us:
That's it! There is more on my "The Real Candidates" website, but not much more. It's a very simple plan and it would change the course of this nation for the better. 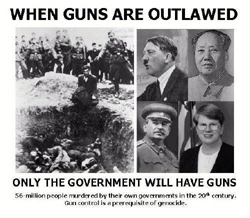 Automatic weapons have never been used to terrorize Americans here on the mainland. In fact, automatic weapons have never presented any problem whatsoever to the populations of American cities and towns! By waging a fear-based campaign against these types of guns, We, the People have become afraid of these kinds of weapons, but none of us have ever even had an automatic weapon aimed at us here on the mainland. But our government had their reasons for wanting to ban automatic weapons: it was intended to render us incapable of defending ourselves against a tyrannical government. Would our own government ever turn it's guns on We, the People? I surely hope not, but many Americans believe that writing is already on the wall here in the USA.

Let ours not be the generation that threw our freedom away. Let us not be responsible for thousands, lo millions, of Americans dying in vain, simply because we were too gullible to hold our ground and protect our God given rights and freedom. The media is no longer on our side. Our own government no longer appears to be friendly to the people, either, unless we are dependent upon food stamps, General Assistance and other freebies and free cheese paid for with OPM (other people's money). The rest of us, however, seem to be considered 'enemies of the state,' with our Bibles and guns and desire for smaller government.

Never before in my lifetime did I get the impression that my own government considers me the enemy like I do right now, and with good reason. I, and people like me, are on our government's "Enemy List." As Bible-believing, independent thinkers who support our Constitution, we've been deemed "the enemy" by our government now. The time is growing short and we must throw out any government who appears to have it's own best interest at heart, rather than the interests of We, the People. This current administration, as well as both houses of Congress, appear to be united with one another — one party, and not two. But they ignore the majority of their constituents completely. They have puffed up their own benefits and salaries far beyond the national average, that is, what those in the private sector receive. And they are so generous, perhaps, because it's not their money they're wasting or taking or giving away so freely. It's our money, yours and mine — our tax dollars.

While this current administration and Congress are treating so many patriotic Americans like we're 'the enemy,' methinks that may be because they are busy doing things that We, the People might consider actions which only our enemies might take. That is, perhaps they consider us their enemy because they have chosen to become our enemy. Food for thought.

Let us not forget how many men and women died in order to secure this amazing nation. It is far easier to keep our freedom than to try to win it again, once it has been taken away. Let us not forget that there are reasons our government is trying to take our guns away from us. It has nothing to do with protecting us. It has everything to do with protecting them from us...because they know that we will not lie down and allow them to do to us what they are already planning to do. We will not let them take America's sovereignty away and make us part of some ungodly One World Government, and that, my friends, is what this gun issue is really all about. Those men who wish to rule the world know that the only thing which stands in the way of their effort to create a global government is our guns. Let us not forget that.