August 18, 2016
America is rapidly going to hell in a hand basket, and yet we look to the Federal Government for answers. Americans have reached a state of near delusion in which we cannot see that the government has no answers for any of our problems because America's problems are spiritual. In fact, America's true condition is spiritual bankruptcy. Fixing this requires much higher authority than mere mortal men.

Admittedly, there is much to discuss regarding the current government, political circus, and corruption we have accepted as the new normal in America. But right now, we must understand the role of the Church regarding these matters. Again, the unbelieving world will continue to do what unbelievers do; but for those who call ourselves Christians, God is giving yet another wake-up call to jolt us from our spiritual blindness and laziness. If we don't begin to be what He's called us to be, and do what He's called us to do, then our nation's future is grim. Further, we will be judged by Him for our actions. Yes, God is love, but He is also a righteous Judge.

Considering ourselves wise, we have become utter fools! Don't blame me for making this observation. It comes from the Bible. The Apostle Paul is speaking about God's wrath against mankind. He explains that God has clearly revealed Himself to humanity. His "eternal power and divine nature have been clearly seen, being understood from what has been made, so that men are without excuse." (Rom. 1:20 NIV) In other words, men know and cannot deny that God is responsible for all of creation, including our very being. But, because of our wickedness, we deny God, and refuse to be thankful to, or glorify Him. Consequently, our thinking becomes futile and our foolish hearts darkened. (vs. 1: 21) Then Paul explains, "Although they claimed to be wise, they became fools and exchanged the glory of the immortal God for images made to look like mortal man and birds and animals and reptiles." (vs. 22-23) This is called idolatry.

What we see all around us in America is the result of shaking our fists at God, rebelling against Him. This nation was founded on Christian-inspired, Bible-based laws and principles. Founding Father Noah Webster claimed, "The moral principles and precepts contained in the Scriptures ought to form the basis of all our civil constitutions and laws. . . All the miseries and evils which men suffer from – vice, crime, ambition, injustice, oppression, slavery, and war – proceed from their despising or neglecting the precepts contained in the Bible." The late Judge Robert Bork explained what's missing in today's society are "the restraints of morality, religion, and prudence." He stated that as long as restraints stayed in place, a very good society was produced...once the restraints collapse, a chaotic society is produced. Scripture says, "If the foundations be destroyed, what can the righteous do?" (Ps. 11: 3 KJV)

In America, the foundations have been nearly destroyed, and most restraints are gone. In the "Me Society" described in the first part of this article, we discussed how the underlying attitude of "my individual right" to do whatever I want outweighs the overall concept of doing what's best for society. Once upon a time, the idea of "my rights" was said to "stop at the end of my nose." In other words, we can do as we please as long as it doesn't affect the next person's ability to live his own life.

We have also discussed how the Church – Christians – are supposed to affect the society around us. But sadly, we now resemble the world more than we resemble Christ, even though Scripture admonishes us, "Do not love the world or anything in the world. If anyone loves the world, love for the Father is not in them." (1 Jn. 2: 15 NIV) While we are in the world, we are not of the world. Dear Christian friend, do you understand this? Which world do you resemble...God's or man's? Just sayin'...Periodic self-examination is required for all of us.

Many of today's societal problems stem from Supreme Court decisions of the 1960's we previously discussed, those removing prayer and the Bible from public schools. The damage caused from these decisions has been severe. In a 2014 report, Removing Bible, Prayer from Public Schools Has Caused Decline, Professor William Jeynes discussed why Bible reading and prayer should be returned to public schools. His research indicated a decline since 1963 in several critical areas:

Jeynes noted a comparison between the top five complaints of teachers from 1940-1962 – talking, chewing gum, making noise, running in the halls and getting out of turn in line – to rape, robbery, assault, burglary and arson from 1963 to present. "When we remove that moral fiber – that moral emphasis – this is what can result."(cnsnews.com)

Since 1980, the Ten Commandments have been removed from schools. Again, this was another "decision" from the United States Supreme Court. Really, what congressman or senator would have the intestinal fortitude to vote for a law banning the commandments? Or how about the removal of prayer or the Bible? The answer is NONE! No sitting politician would touch these subjects with the proverbial ten-foot pole!

So, why does the world fear the Bible? What is so bad about God's Ten Commandments? They basically tell us how to behave towards God, and towards man: 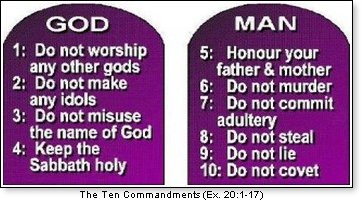 The first four simply tell us to honor and respect God. The last six explain fundamental behavior towards our fellow man. Simple. Exactly how is telling us to honor our father and mother a bad thing? And what about not murdering, committing adultery, stealing, lying, or coveting? Don't we already teach our children these things? How can banning these simple rules of proper behavior offend anyone?

Once again, to avoid offending a few people, the rights of the many are infringed. Because there are a few people who are offended to hear there is a God, liberal judges – oligarchs – rule from on high that centuries of religious tradition and faith practiced in America must be obliterated. And the entire country suffers.

Now, anything referring to the God of the Bible must be removed from nearly all public places. What's most troubling about this is that Christians haven't demanded action from our legislators – you know, the ones we elect to do our bidding in the halls of power. But then, it appears the Supreme Court has replaced God. They hold absolute power over EVERY move we make. In other words, Federalism is dead. The USSC has neutered all lawmakers. America is now ruled by nine people, four of which reject God. (Currently there are only eight USSC justices since the death of Antonin Scalia.) These justices also reject the U.S. Constitution, and believe they should be "makers" of the law, not just interpreters of the law. So then, what hope do we have, particularly if Christians don't stand and fight?

The tragedy in all of the above-listed cases is that Christians allowed it to happen. Why didn't we storm the school boards, removing anyone who was anti-God, anti- Bible? Why did we, then and now, elect anyone to "represent us" in government when they didn't/don't truly represent us? It's our bad.

If there weren't enough God-fearing people to "fight city hall" in the 60's when nearly 90 percent of the population supposedly honored the Judeo-Christian faith, what hope is there for today with the dwindling number of believers?

Yes, there is what the Bible calls a remnant. These are the obedient, faithful Christians who are both hearers and doers of the Word. In today's lingo, they walk the talk. The Bible teaches that, like in the days of Noah, and Sodom and Gomorrah, God will withhold His judgment on a nation for even a small number of faithful believers – the remnant. Yet eventually, judgment will indeed fall. Dear friends, doesn't it look like we're close to judgment?

Before it's too late, we who call ourselves Christians truly need to understand our nation is spiritually bankrupt, and much of it is our own fault – we no longer walk the talk. Question: Are you walking the talk? Are you still providing salt and light? We are the ones who need to get right with God and do our part to turn things around. We'll learn more in the next column. To anyone willing to hear....