Madeline Crabb
Grow up, get a grip, or get out of the way! Part two

December 12, 2016
In just six weeks, America will officially have a new president – Donald J. Trump. It has now been over a month since the election, but the sore losers of the Lunatic Left are still trying to win the election. Newsflash: It is time to grow up, get a grip, or get out of the way!

In the past few weeks we have seen the failed Green Party presidential candidate, Jill Stein, file for recounts in three states of the fifty she didn't win. It's only logical to ask why she is allowed to contest the results in these or any state? In fact, in the three states for which she's "contesting" the results – Michigan, Wisconsin, and Pennsylvania – she only won one percent of the votes.

It's also logical to wonder from where she's getting the donations to supposedly pay for the recount. Forbes.com reports the donations currently total $9.5 million. By all media accounts, she only raised about $3.5 million for her initial presidential campaign. It appears sore loser Jill has some serious donors giving her money, but is it for her, or the other loser, Hillary Rodham Clinton?

It has been reported that HRC had as much as $2 billion to spend on campaigning for president. Throwing a few million towards Stein's recount is a pittance. Yes, even while HRC gave a concession speech declaring Donald Trump was indeed the winner of the presidential race, most of the Democratic Party mouthpieces are saying that she actually won the election because of the popular vote. HRC could actually win the election with the three "contested" states. Obviously, this isn't going to happen. Reality check for any private citizens who donated to the Stein/Clinton recount (call it what it is): You've been duped. It's all a scam to raise some spending money. Stein's laughing all the way to the bank, unless the states demand reimbursement for all the work she created for them.

Could it be that Stein and Clinton are in collusion to throw America into a constitutional crisis? The Constitution requires that all states' votes be certified by December 13. (Six days before the meeting of Electors.)

Of course, there is also a fight to get the Electoral College to do a massive switch in electing HRC. There are individual electors who are "holier than thou" that have declared they cannot and will not vote for Donald Trump, even though he won their states. All states have their own guidelines for these electors, and it is somewhat worrisome that some states allow electors to vote for whomever they choose. But will it make a difference? If all else fails, the matter is decided in the House of Representatives. Aside from mass insanity overwhelming the House, Donald Trump would still be declared president. If our representatives decided otherwise, I truly believe there would be a second Civil War.

What is most troublesome about any Elector "revolt" is the lack of respect for the process, and the rebellion against the will of the people. Yes, HRC may have won the actual popular vote. So what?! We do not live in a pure democracy where the majority wins. Our Founding Fathers called such a system mob rule. In this election, Americans overwhelmingly rejected HRC and most of the Democratic Party's candidates. Big time! 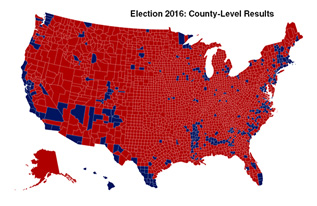 To the individual electors, We the People ask you to honor our choice.

Sadly there is also backlash from the political Establishment, the career politicians who are apoplectic over the GOP mandate. Perhaps they should look at the map and recognize the enormity of that mandate. And yet, there are those who are hell-bent on disrupting and perhaps even stopping President-elect Trump's cabinet nominations. Fortunately, one major disruptor has retired – Harry Reid. (Good riddance.) But in his place we have yet another leftist fanatic who believes he can steamroll over everyone else – New York's Chuck Schumer. Seemingly he and the rest of the Democratic Party forget that elections indeed have consequences. And apparently they still don't understand how serious We the People are about taking back our government.

Trump is doing exactly what he told us he would do. Of course, this has many elitist liberals protesting. Establishment hubris is demonstrated by people like New York mayor, Bill de Blasio, and Chicago mayor, Rahm Emanuel, who actually dictate to DJT what and how things will be done in their kingdoms, despite our national laws. Let's see...mayor trumps president?! That's some organizational chart! Any guesses about who wins in the end?

Much of the political Establishment still holds out hope that everything will proceed as usual – where there is no difference between the parties, or where the Republicans simply bow to the will of the Democrats, even if the former has the majority. And in our major cities, Democrat mayors such as those just mentioned believe they are above the law.

Overall, most of our major cities are lost, and will probably never elect Republican leaders. But We the People are not afraid to replace our governors, or even our Republican congressmen and senators if they don't grow a collective spine and represent us.

We have lived eight years under so-called leadership of the most anti-American, anti-Christian president in our history. He has played a huge role in dividing America, and caused other immense damage our nation, much of which may be irreversible. He has pitted blacks against whites, rich against poor...He has demonized Christians and everything we believe in...He has put the needs of foreigners over the needs of American citizens...He has jeopardized our sovereignty by allowing an invasion via our southern border...He has endangered our safety by allowing the influx of non-assimilating, sharia-following Middle Eastern refugees. Our reputation worldwide is laughable.

Last month, We the People drew a line in the sand. Unlike Obama, we are serious about our line. This government is our government. We are forced to give far too much of our hard-earned money to a government that has done nothing but want money and power. We elect people to represent us who in turn use their power to buy votes from select constituencies to gain more money and power for themselves. Oh, and let's not forget that We the People also pay for the salaries, benefits, and retirement of all these people who take our money to give to others to stay in office. It's a never-ending cycle that has to end! We have had it!

Note to the Democratic Establishment: There's a new sheriff in town! The map shown above should illustrate how serious we are about our new leadership. Therefore, we ask that you realize you are no longer in control. We the People want sanity, reason, and constraint to once again prevail in our nation. Leftist lunatics may be able to destroy most of our major cities, but at least for the next four years, we will not allow it in our nation at large!

Nationally, the GOP controls the House of Representatives, the Senate, and the Presidency. The election is over. The Electoral College meets in less than two weeks to certify the will of the people. Don't we all need to gather behind the new leadership and heal our nation? Don't we all want to be part of the solution, not part of the problem? So whine if you must, but it really is time to grow up, get a grip, or get out of the way! To anyone willing to hear....