The world is witnessing one of the largest power grabs in history. All areas in this society are under attack. So, what else is new, you might ask? The answer is that this time, it is the United States of America being attacked. The attackers are not necessarily outsiders, but the very people we have chosen to represent us in what remains of our Constitutional Republic. Overall, most of these folks are nothing but puppets, prostitutes, and pimps.

For the last several weeks, we have been discussing some of the puppets performing at the highest levels of our government. The most obvious is Puppet-in- Chief Joe Biden. This man has been dancing for dollars for nearly 50 years, for whatever puppet master paid the most money. (See previous installments of this series or read the referenced works.) But then, so have scores of other “public servants.”

So, when we consider the “visible” puppets, prostitutes, and pimps, we must remember there are multiple levels of the three p’s, who each can operate in more than one function. Kamala Harris is one of these.

Please forgive me for not calling her the vice president, because if we were still living under the U.S. Constitution, aka “the law of the land,” she would not be eligible for that office. In truth, neither of the top two elected officials are eligible, in my humble opinion, because the election was fraudulent. But then, we must be applying common sense…

Perhaps we should just start at the beginning. Kamala Harris is not eligible because she is not a “natural born citizen.” (Corruption always has a beginning.) Now, before you stop reading, let us at least look at some facts.

Both of her parents were in the United states on student visas in 1964 when she was born. Harris’ mom, G. Shyamala applied to the U.S. Citizen and Immigration Service for a student visa on September 3, 1958, declaring her intent: “temporarily and solely for the purpose of pursuing a full course of study in the institution or recognized place of study which has accepted me as a student.” (https://www.thepostemail.com)

Then, according to the baby Harris birth certificate, which appears authentic, mom is listed as a citizen of India and Caucasian, and dad, a citizen of Jamaica. But in the 1950s when Donald Harris was applying for his student visa, Jamaica was still under British rule, which would make him a British subject, would it not? 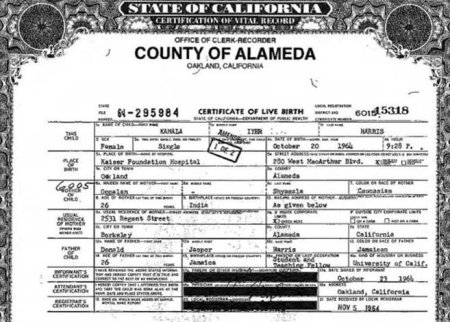 Note that under the Jamaican constitution, Harris is a Jamaican citizen because her father was a citizen of Jamaica at the time of her birth. Remember, both parents were “non-immigrants” on student visas. (Subject to the laws of their own countries, not those of the United States. Words do mean things in most countries – except America).

Every person born outside Jamaica shall become a citizen of Jamaica –

a. on the sixth day of August 1962, in the case of a person born before that date; or

b. on the date of his/her birth, in the case of a person born on or after the sixth day of August 1962,

Could she even be an English citizen? Hmm…At best, she is an “anchor or jackpot baby,” because of the convoluted interpretation of the 14th amendment to the U.S. Constitution, which then makes her a dual citizen. The proverbial icing on the cake is that the Jamaican constitution allows dual citizens to serve in their legislature!

By the way…at one point, a deportation notice was issued for Harris’ mom, who subsequently went to Canada for work. When she wanted to return to the U.S., entry was denied.

But when Kamala turned 21, she “sponsored” her mom’s re-entry into our country. Harris is a “citizen” supposedly because she was born to a “non-immigrant” temporarily living in the States, someone who cannot re-enter the States upon leaving, only to be sponsored by the now “adult child” who magically became “legal” through that “non-immigrant visitor.” Is it just me, or does this whole thing sound preposterous? Why are there ANY immigration laws? Just let everyone come in! Oh, but we do…

There is no evidence her mom ever became a U.S. citizen. Her father did apply for citizenship, but well after Harris was born.

Another immigration fact that is notable, from the official government website, is that if a “non-immigrant” visitor to the U.S. on a student visa brings an already-born child with them to our country, the parent must apply for a visitor visa for the child. And yet, the same parent has a child while here and that child is automatically a citizen? What a conundrum!

Can we begin to understand why there needs to be concise language in our laws, and judges who are righteous arbiters of the laws as they were understood by sane minds at the time of their writing.

I always say that when God wrote the Holy Bible, He said what He meant, and meant what He said. The writers of our founding documents were written the same way, including the 14th amendment. Unlike today, people at that time fully understood the language in which these documents were written. We cannot use today’s dumbed down lingo or Wikipedia definitions to interpret the meaning of words written so long ago.

Now, while the nation of India does not allow dual citizenship, they do offer a Person of Indian Origin (PIO) card that grants special privileges/benefits for 15 years. From my research, there is no proof of how/if Harris used these benefits. However, beyond just this entitlement, her family was Brahmin, the highest caste in Indian Hindu society. Her grandfather was a joint secretary in the Indian government. Her uncle Gopalan Balachandran has been a top consultant to the Indian government, his specialty being nuclear weapons. (nationalfile.com) No, Harris could not possibly be a national security threat, could she?

Is it not becoming more clear as to why our founders wanted those at the “tippy top” of government to be natural born citizens who had absolutely NO attachments to other nations?

When running for the presidency, Harris portrayed herself as having suffered greatly from racism and discrimination. And yet, she has lived a pretty cushy life. My research led me to even the society pages in the Bay area where adolescent Kamala did very well. In the Midwest, she is what we would call a social climber. She was always seen with the “movers and shakers.” She would apparently meet one person, glom onto him/her, and then magically be seen with others from the same social circle, and on and on. She truly knows how to “work it.”

This carried on into her professional career when early on she got “acquainted” with a major player, California’s own Willie Brown. He was powerful, corrupt, had mob and communist ties and financial backing, was under FBI investigation multiple times, and was the ultimate pimp. Harris glommed onto him in more ways than one. While it is inappropriate on this platform to speak words that accurately describe her, let us say that she was then, and still is willing to do just about anything for power.

Married Brown was her boyfriend and sugar daddy. Harris’ own mother approved of her daughter using this married man to achieve her goals. He opened all the right doors, removed all the wrong people to make room for his little puppet/prostitute, sent voters her way, and made all the deals for his little “chew toy” as she has been described by more clever people than myself.

When she dumped him to move on to bigger fish in the pond, they remained working partners in corrupt California government. As she moved up the political ladder, the money flowed from all the high-end patrons/friends of Brown. Once in her various positions, including attorney general, the favors flowed back to those same patrons/friends. See how the system works? The political lowdown, which is not for the weak of heart, can be found in Peter Schweizer’s book, Profiles in Corruption.

But to get to the attorney general position, Harris also used the services of Barack Obama. (She is considered the female BHO! Really.) They in fact used one another to achieve their positions. Birds of a feather…He called upon her for support in 2004 when he was running for the U.S. Senate.

So, it appears that the reason Biden chose Harris as his running mate is Obama. But then, Biden is not choosing anything or anyone. The powers-that-be are doing ALL the choosing, and BHO is just another highly paid puppet of higher powers. More in the next article…

In conclusion, if we take the time to look a little closer at Cackler Kamala, we will find she is totally untrustworthy. Her idea of law and order depends on whom her puppet masters want protected, whom they want to suffer. Scruples and integrity are foreign concepts to her. She was raised by radical/Marxist/communist parents. We must dig to find the stories, but I have given several sources to get you started down the proverbial rabbit trail, if you are so inclined.

Also, author Trevor Loudon wrote an excellent story, one I highly recommend reading, about Harris’ communist ties—and there are many. (Think spiderweb) In his summation, he concluded: “If Harris were to apply for a mid-level job in the Department of Agriculture, she would almost certainly fail the security background check. She owes her entire career to sympathizers or active enablers of the Chinese Communist Party. Fortunately for her (and potentially disastrous for the country), elected office holders are not subject to the security clearance process.” (emphasis mine) (https://www.theepochtimes.com/why-is-no-one-except-the-president-calling-out-kamala-harriss-communist-ties_3538284.html)

And let us not forget Harris’ husband, Douglass Emhoff, who works for a law firm with decades of work for the Chinese Communist Party. (See Schweizer’s book for background on how he has benefitted from Harris’ positions in government.)

Is it not bewildering how so many people can serve at the highest levels of government, and not be required to pass security clearances? And we wonder why so much “leaking” happens by those same people?!?

So, it is terrifying to know Harris is probably the de facto president getting marching orders from Obama. However, last week Maria Bartiromo said on her Sunday morning program that Biden gets calls every day from Obama. Curious. But then, Obama would have to repeat said orders to someone who will remember being told, thus alter-ego, Harris.

We are watching the disintegration of a once great nation into a nation of victim groups, fighting each other, egged on by our own representatives who themselves are simply puppets, prostitutes, and pimps feathering their own beds.

Do we have a clue as to the lateness of the hour, the fate of our nation? Only true, biblical, “sackcloth and ashes” repentance (Jonah 3:5-9) can save us now; but in truth, could it be too late for that remedy as well? To anyone willing to hear….