In less than 250 years, America has gone from fleeing bondage under a wicked king in England, to again facing bondage under the “new” kings—just different faces/names. Evil does not change its character. Americans have been snookered by evil spirits driving today’s collection of puppets, prostitutes, and pimps. 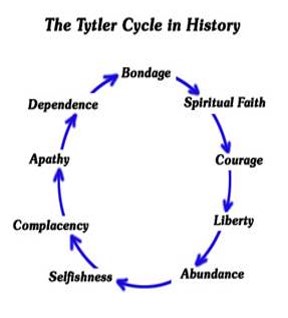 Some might still be asking: How did this happen?

In a previous part of this series, I stated that there are no political solutions to spiritual problems. Our current dilemma has been caused by our own actions. Simply put, we replaced the God of the Bible with other things and people—little “g” gods. We elevated mere men to godly positions, giving them carte blanche over our very existence, but failed to seek God’s guidance, on how to hold them accountable. And here we are today with these men holding ALL the power over us.

While we have previously discussed those in our government bodies, we now must go higher. Frankly, on the Wall Street diagram below, we can see that world governments rank rather low in the scheme of things. Moreover, notice that people are not included in the power pyramid at all. Why do you think that is? 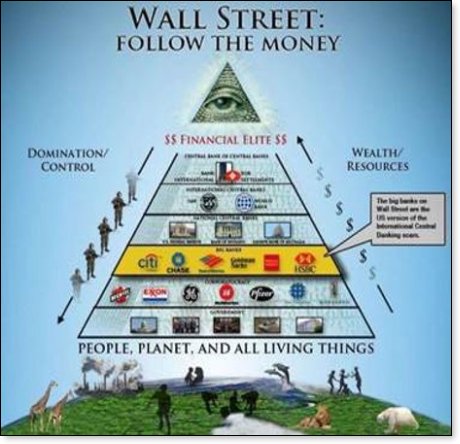 Today in America, we hear cries and complaints about wealth disparity, pitting citizen against citizen—the haves vs. the have nots, the rich vs. the poor. The puppet masters are behind all the jealousy/covetousness (sins).

In fact, covetousness and pride were the original sins committed in heaven by none other than Lucifer. In essence, he thought he was equal to Almighty God, and sought His throne, even inciting other heavenly beings to help him in his quest. Lucifer was kicked out of heaven, as were a third of the angels. We now call him Satan. (Ez. 28, Is. 14) More on this later…

So, why do the powers-that-be want us mad at each other over wealth disparity, and not mad at the corporations and the banks who have all the money and caused the disparity? They control the prices, what we consume, the amount of money we can earn on savings (about zero now), what type of news we should be allowed to hear, what we can say publicly, how we can worship our God.

Yes, there is a wealth disparity. But look at how it is really happening. Did you know that the top one per cent of all people own 50 per cent of all wealth worldwide? Did you know that only about ten corporations produce the food in our supermarkets? Small business owners wanting the “American dream” have been forced out of business as large monopolies moved into their communities causing them to be unable to compete. Since we are now captive to a few multi-national corporations, with few other choices, they think they can also tell us how/what we should believe/behave. How dare they! And yet, we still buy their products, and adore their Hollywood mouthpieces.

And about that wealth disparity… Ha! Entertainment stars and corporate executives all make multiplied millions of dollars. So why get mad at your neighbor who drives a nicer car? All the cars are too expensive anyway because of government. (But lobbyists, highly paid execs, and congressmen must get their share.) Also, do not forget our tax dollars have even bailed out some of these poorly managed companies, who still send manufacturing to other countries.

Cancel Culture comes from ALL the sources included in levels five through seven but is promoted through media corporations that are in turn owned by just five or six mega-corporations. With mergers, it is hard to tell. (https://www.whiteoutpress.com/who-owns-the-american-media-here-s-the-list/ ) Suffice it to say that what Americans are allowed to view/hear ultimately comes from a handful of people who control 90 per cent of all media sources.

Now, when all the censorship began on so-called social media platforms, the U.S. Senate finally pulled the big tech moguls in for questioning. Repeatedly, these men refused to fully answer simple questions about their practices. Instead, they often replied that they would be glad to “look into” things and get back with the various senators. Guess what? If they ever got back with said senators, they would neither be “under oath” nor would they be on camera for all citizens to see. Oh well, it does not matter because the companies are still allowed protection by the government despite their censorship, and their monopolizing of the market.

Please consider the incredible power these companies have when they can silence the President of the United States! Why would any of us believe they care for average citizens? Oh, but they do not. Look again at where the people are in the Wall Street power diagram.

In 2014, Princeton University did a study on whether government truly represents the people/citizens. The summation: “The preferences of the average American appear to have only a minuscule, near-zero, statistically non-significant impact upon public policy.” (https://www.thelastamericanvagabond.com/illusion-america-ever-really-existed/)

Is the picture getting any clearer for us? Most government leaders do NOT care what we think or what is/will be happening to us. Remember that each level is full of people simply doing the bidding of someone higher on the proverbial food chain. Everyone is just a puppet, prostitute, or pimp until the highest level.

That brings us to the next levels that include international banks (central banks) and the central bank of all central banks, the Bank of International Settlements. This is where the powers of families like Rothschild, Rockefeller and their ilk are shown. At this level, whole countries are at the mercy of the ruthless people running these banks.

Anyone so inclined can learn about how the central banks have repeatedly backed both sides of almost every war that has been fought worldwide. The men controlling these banks control all the money, and therefore, have power over literal life and death of people/nations. They pick the winners and losers, but still are just high-level puppets. However, crossing them is extremely dangerous.

If he were still alive, President John F. Kennedy could tell you about central banks. He planned on eliminating the Federal Reserve but was assassinated. Clue: There is nothing federal about it, and it is not a part of our government. It is part of the banking cabal run by top elitists.

Mayer Amshel Bauer-Rothschild once quipped: “Give me control of a nation's money and I care not who makes the laws.”

For more information I recommend reading the Creature from Jekyll Island by G. Edward Griffin.

In these two levels we also find the secretive organizations in which elitists formulate their plans. People like George Soros, Henry Kissinger, John Kerry, as well as representatives from other nations, also attend to get their marching orders. These folks have been in key government roles, advising/ordering (?) presidents and world leaders for decades. To stay alive, and in leadership, countless American presidents have “toed the line.”

The names of these groups were once not even whispered. Nobody ever divulges what transpires during the meetings. Groups include Bilderberger, the Trilateral Commission, Council on Foreign Relations, World Economic Forum, and many other secret societies. While not a secret society, the United Nations is part of this cabal. Read about Agenda 2030. (https://www.thelastamericanvagabond.com/un-releases-new-universal-agenda/)

At this level we also find the foundations/charitable organizations. Now, while some monies may indeed go to charitable causes, mass amounts of the wealth can be sheltered from taxation, or from even being reported to various governments. Further, money from these various foundations affect almost every aspect of our society. For instance, Rockefeller money is behind the decline in American education and the dumbing down of America.

But at the highest levels are people so powerful that few know their names. These include royal bloodlines that have intermarried for centuries to keep their blood pure. They protect their identities in a variety of ways, including changing their names, hiring “breeders” to have their children, and even adopting out their children. There are numerous books on this topic, but one of the most comprehensive and easiest to read and digest is by the researcher Jim Marrs, Rule by Secrecy.

These people want power and wealth and have been involved with secret societies for centuries, using dark/evil powers to achieve their goals.

All of this is far too complicated to understand without a biblical lens. Scripture teaches there is power in the blood of Jesus Christ. But many of the people we have been discussing follow Lucifer, not Jesus Christ. They are called Luciferians and believe that Lucifer is the “good guy” while Jesus is the “bad guy.” Some even believe they are descendants of Lucifer, and there is magical power in their blood because of this. Consequently, their bloodlines must be protected no matter what to bring about the New World Order, and the rise of Lucifer.

When Satan is finally revealed upon the earth, literal hell will be unleashed upon us. Satan will finally be judged for all the evil he has caused on earth. But before he is judged, he is going to create havoc. Sadly, all who have worshipped/served Satan will suffer the same judgment.

By the way, that Mark of the Beast business you might hear being discussed in so-called “vaccine” debates is about Satan. (Rev. 13, 16)

So then, we have gone from talking about low-level puppets, prostitutes, and pimps working in government to the most powerful, secretive families and entities pulling the proverbial strings of all the puppets at every level. For those who are students of the Bible, this should not be surprising. But for the multitudes who dismissed God and His Word, this can be shocking.

These teachings are meant to help us understand what is behind all the garbage we are being fed by MSM and our government, and to cut through all the brainwashing public education has done to us for decades. The Bible says, “My people are destroyed for lack of knowledge.” (Hosea 4:6) It is my belief this is not just biblical knowledge, but an understanding of what is happening all around us.

This information is also about us awakening from our selfishness, complacency, and apathy as shown in the Tytler Cycle above. Then as each of us awakens, we can in turn tell others so they too can awaken. The response depends on the will of the people being oppressed.

Sir Edmund Burke once said: "The only thing necessary for the triumph of evil is for good men to do nothing."

As previously stated, I still believe America must have massive, heartfelt repentance from our sins. This means we both confess our sins and stop sinning. However, repentance must come one heart at a time.

While there is coming a time of judgment for Satan and his followers, and even for nations, those who repent and make Jesus Christ our Lord and Savior can trust God will forgive us and help us through the trials and tribulations all of us will surely encounter. As Scripture says, “Today is the day of salvation.” (2 Cor. 6:2) To anyone willing to hear….