Ever heard the phrase: Dead man walking? Scientists say the human brain can still function for hours after a person dies. Likewise, while our Federal Government is technically dead, it is still operating on leftover “brain energy.”

While We the People are still able to go about our daily business across this land, the Federal Government that is supposed to be of, by, and for the people is a shadow of its former self. Financial and geopolitical cycle analyst Martin Armstrong says, “The United States will not exist after 2032. (My prediction was another 20 years, without God’s intervention.) After 2028 and 2029, we are going to have to redesign a government from scratch. America is being destroyed.” He also said there may not be a presidential election in 2024. It is reality check time—America is dead. She has just not “given up the ghost” yet.

It is one month after the 2022 midterm elections, and still, results are uncertain from various locations. But then, true results from the 2020 election are still uncertain and questionable. We the People are told “move along, there is nothing to see here” despite all the evidence of fraud, manipulation, and interference by multiple domestic and foreign actors. Why is it our so-called leaders do not want total transparency in this process? Rhetorical question…we know why. They do not want us to know what they are doing because we might revolt. Remember, they crave power and wealth and will do anything to keep both. So, instead of being forthright and honest, they call us names. Ridicule is tactic number four from Saul Alinsky’s Rules for Radicals, a ploy “almost impossible to counterattack.” Look at how nearly anyone called a racist cowers in fear.

The Progressive mantra used to be: Question authority. We “deniers” are simply questioning authority. But now these progressives, (socialists/communists) are the authorities, and the rules have changed.

It is disconcerting to observe how the mind-numbed masses seem to go along with the corruption and control despite the direction our nation is taking. Various national polls have said that up to 85% of Americans believe America is headed in the wrong direction. So then, they continue to vote for the same people/party that has taken us there? Now that is insanity.

Besides Martin Armstrong, there have been multiple analysts suggesting the possiblity of no future national elections, and that Donald Trump is the last duly-eleccted president. Bible prophecies, some of which were written long ago, have also addressed this subject. The vote rigging, manipulation, domestic and foreign interference, and huge amounts of money “buying” votes and elections indicate there is no longer anything free and fair about our election process. Our elections now more closely resemble those of banana republics. We are thus headed into a dictatorial/totalitarian form of government. In fact, if our elections have not been free, fair, and honest, then our “representatives” have been selected, not elected, meaning we are no longer living in a representative republic, which in turn explains why there are no more elections necessary. Sobering thought…

Of course, there is also the fact nearly all print and network media constitute the public relations arm of the Democrat Party. Yes, even Fox News. (Upper management has already informed President Trump they are against him. Hmm…So much for fair and balanced.) Only the naïve trust and believe the MSM. God loves even the naïve and trusting, but is calling all of us to both grow up and wake up! President Ronald Reagan told us to trust but verify.

We the People were given an awesome country with an incredibly efficient form of government that we were supposed to oversee. We instead adbicated this responsibility, thereby relinquishing control to evil, corrupt men who have all but destroyed our representative republic. These people have sold us out to other nations, most of which would be considered our adverseries/enemies. It is believed that huge parts of California are now owned by Red China, and fact that our farm land and various companies are being sold to China as well.

A friend of mine originally from Taiwan, an American citizen for over four decades, says it is insane for any nation to sell land/companies to other nations. Well, duh! She said China does not allow this. Why do we? Oh, but we know the answers… Our leaders’ main goals are to accumulate power, control, and wealth, and some of them are “in bed” with the Chinese Communist Party—at the highest levels of government, and from both political parties.

While we will further explore the communist infiltration of America in future articles, we need to remember that the average age of empires is 250 years. We may or may not reach that milestone in 2026. Will there still be some remaining vestiges of America? Truly, only God knows. Look around and assess the devolution of civility, morality, common sense, and responsibility, to name just a few areas of concern.

The following diagram of the Tytler Cycle has been used by me in previous articles, but is even more relevant today in showing how far America has devolved. 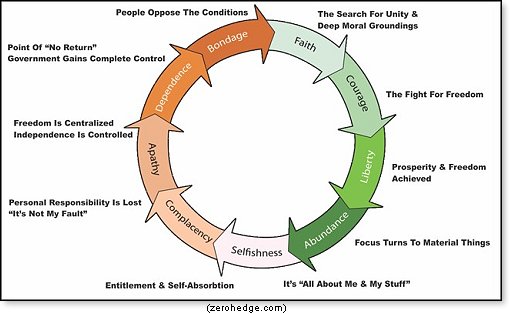 When we last visited this chart we were somewhere between Complacency and Apathy. It now appears we are between Apathy and Dependence—close to the point of “no return.” Again, look around and assess the signs for yourself. Do your homework. How much control does the Federal Government now have over our lives? Just consider that millions of people have been censored and silenced in the past few years, with governmental blessing. Do we still have a First Amendment right? How many other amendments are still viable?

Oh, there is so much I have been considering in these past weeks. In previous articles we have discussed how America is hanging on the edge of the cliff, clinging to anything that might stop the fall. We are now in free fall. What can we do?

This morning while contemplating this message I was reminded of Abraham and God discussing the fate of Sodom and Gomorrah. Abraham was asking God if He would withhold judgment against these cities for 50 righteous people, and continued to bargain down to ten. God agreed that if there were just ten righteous people that He would indeed have mercy upon, and not destroy these cities. Alas, there were not even ten righteous people. Only Abraham’s nephew Lot and his immediate family were rescued by God’s angels before He unleashed fire and brimstone upon the area. (Gen. 19)

Again, it is reality check time—America is dead. Sadly this condition seems irreversible; but then, with God, all things are possible. (Matt. 19:26)

It is my prayer there is a symbolic “ten righteous people” left in America to stop the coming judgments against us. In our hearts, we know America deserves judgment. On just what we have done through abortion, we deserve judgment. Now children who manage to be born face indoctrination into all sorts of unnatural sexual practices/lifestyles by the LGBT mafia. And remember, the people in Federal Government, including the highest courts, are endorsing all this evil, and more. In truth, We the People have allowed it all to happen.

Dietrich Bonhoeffer said, “Being a Christian is less about cautiously avoiding sin than about courageously and actively doing God's will,” and that “Silence in the face of evil is evil itself.” He was one of few clergy who stood against Nazi evils, and was imprisoned and executed for doing so.

Are any of us willing to stand against the evil here in America, an evil the Bible says will only get worse? It may one day cost us our lives, but then, God rewards us with eternal life with He and His Son, Jesus, when we honor and obey Him. To anyone willing to hear….