May 25, 2010
Ken Blackwell's discussion of The Blueprint: Obama's Plan to Subvert the Constitution and Build an Imperial Presidency on "The Daily Show with Jon Stewart" didn't exactly make the case. Stewart essentially mocked the thesis and Blackwell seemed nervous in the spotlight. Afterward, some anonymous critic at the Huffington Post huffed and puffed with false claims. Then, even though Blackwell rebutted the charges, the necessity of his book was neglected. Unlike Jon Stewart and various bloggers, I actually read The Blueprint. 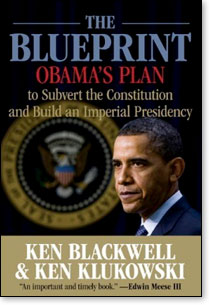 As everyone knows, health care was a key issue in Sen. Barack Hussein Obama's campaign for president. In February 2007, Klukowski and his wife, Amanda, went to Obama's speech at George Mason University in Virginia. Among other things, Obama said, "I dream of an ER where you can go and you won't be turned away because you don't have the right insurance."

"Suddenly, I heard a feminine voice I know very well shout out 'That's a lie!'" wrote Klukowski. "I turned, eyes wide, to see my usually friendly wife with anger in her eyes and fists clenched."

You see, Mrs. Klukowski is an emergency room physician. She knows that according to federal law, namely the Emergency Medical Treatment and Active Labor Act, hospitals cannot refuse to treat any person. Dr. Klukowski witnessed it firsthand. Some 70% of the patients she treated during her residency had no health insurance.

"So no one is turned away from an ER for not having medical insurance," said Ken Klukowski. "Barack Obama is too intelligent not to know that, yet he said it anyway to get a reaction out of the crowd (that cheered wildly at his vow to end the non-existent, cold-hearted refusal to treat uninsured people in emergency rooms). It's the worst form of demagoguery. Obama set up a straw man and then knocked it to the ground to the adoring cheers of his onlookers."

As Blackwell and Klukowski explain, the U.S. Constitution limits the federal government's powers to military and national security, diplomacy with foreign countries, and regulating interstate and international commerce. So the fed has limited jurisdiction and the states have general jurisdiction, which empowers them to make laws according their constitutions.

However, as they discuss, a number of U.S. presidents, including FDR and George W. Bush, laid the groundwork for Obama to almost entirely strip Americans of our liberties. This is anything but boring and tedious. It is essential to our survival and essential to the restoration of our free nation. Thus, Blackwell and Klukowski spell it out in a comprehensible, quick read.

Blackwell told Sean Hannity that the "Constitution is the big boulder in the road" that prevents President Obama from "growing our government at an alarming rate." I beg to differ.

Countless Americans are already alarmed. Therefore, The Blueprint demonstrates the unchecked powers of Obama's unconstitutional czars, threats to free speech, government takeovers of private industry, his plan to pack the courts with judicial activists and so on.

Dare we forget the White House email urging citizens to turn in their family, friends and neighbors who questioned government health care?

To the authors' credit, The Blueprint named Elena Kagan as a probable nominee to the Supreme Court, so the appointments or nominations of others named in the book are likely.

In brief, Blackwell and Klukowski urge us to know our rights and unite with everyone dedicated to this cause. Elections are fast approaching and the results will affect us for the rest of our lives. Read The Blueprint soon — read it before you cast your next vote.