July 15, 2010
The lengthy saga of the black Cherokees fighting racism in the Cherokee Nation of Oklahoma is slowly but surely moving forward. To understand the crux of the cases, see a brief but thorough report in last year's story Who's the racist now? 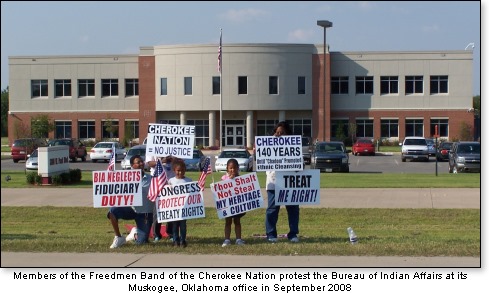 Before we get to the most recent statement by the Freedmen's leader Marilyn Vann and their lead counsel Jon Velie, a few notes.

Rep. Diane Watson (D-CA), author of the 2009 bill to defund the Cherokee Nation of Oklahoma until the Freedmen are reinstated, is retiring at the end of her term. It remains to be seen whether any other members of Congress will carry a torch for the black Cherokees. Incidentally, the CNO's Washington office, probably a great expense to the tribe, has only one item on its website's "Current Issues" section  an old complaint about Watson's bill.

As you may recall from last year's story, the CNO filed a lawsuit against itself in its own court but in the name of black Cherokee Raymond Nash. It did this without his knowledge and the case was heard a year ago, but still there is no ruling. The delayed ruling is hardly a surprise because the CNO also filed a lawsuit against Nash and other black Cherokees in federal court. Now for the latest on that case.

Marilyn Vann, president of the Descendants of Freedmen of the Five Civilized Tribes Association and band chief of the Freedmen Band of Cherokee Nation said, "We are extremely happy with the decision of the Northern District Court that permits the five freedmen which were sued by their own nation the ability to fight for justice in DC where the Freedmen Band which has been prosecuting the same issues in the Washington, DC court since they were denied the right to vote and run for office in 2003.

Jon Velie, lead counsel for the Cherokee Freedmen in both the Oklahoma and Washington, DC filed cases said, "The Northern District decision to transfer the case brought by the Cherokee Nation of Oklahoma against five individual freedmen turned on the fact that that the case had essentially the same issues as the case brought by the Cherokee Freedmen Band and several individual freedmen in Washington, DC, which was the first filed case. Another matter of interest was the court's finding that the tribe had waived sovereign immunity by filing the case especially while the DC court action was still pending. The DC Court of Appeals has previously held in 2008 that the 13th Amendment and the treaty of 1866 have whittled away the tribe's right to discriminate against the freedmen."