September 29, 2010
Many of Robert Liparulo's boyhood dreams have come true. Now, as a successful writer, Liparulo speaks at schools around the United States, where he inspires students to read, write and live their dreams. 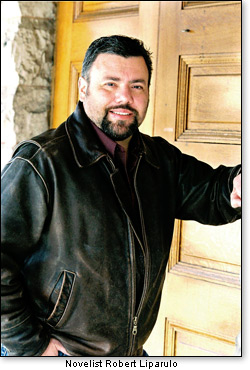 Liparulo, a Christian, family man, sportsman and former journalist, writes thrillers and screenplays. His novels include Comes a Horseman and Germ. The main character of his John Hutchinson novels is a Denver Post writer and avid bowman purposely placed in Liparulo's home state. After all, when Liparulo was a child, he rode through Colorado with his father, "loved it" and urged his parents to move the family there upon his dad's 1975 retirement from the U.S. Air Force.

"I love downtown Denver, the big-city-but-friendly atmosphere. Every year we spend the two days before Christmas in downtown Denver, just taking in the Denver holiday — carriage rides, Santa pictures, great restaurants — we always watch a movie on Christmas Eve at a theater in the 16th Street Mall," he said.

Liparulo's latest book is Frenzy, final novel of the six-part Dreamhouse Kings series, which are action-packed and supernatural adventures for preteens and teens. The series begins with House of Dark Shadows as Mr. King (Dad) takes the job of school principal in a small and remote California town. Mom loves and supports her husband no matter what, but children David, Xander, and Toria are disappointed. After moving into an old house, however, they discover that scary people can enter through its doors and those same doors lead to dangerous places and periods of time.

In the second book, Watcher in the Woods, someone kidnaps Mom, so the family must rescue her — but along the way, they have to decide whether to intervene in history.

This fantastic and educational series has been optioned for feature films by Hollywood screenwriter and producer Eric Garcia, whose credits include Repo Men and Matchstick Men.

Like novelist Andrew Klavan, Liparulo refuses to alienate his kid characters from their parents. Instead, the whole King family fights the good fight together because love conquers evil.

"That's an element of the story that was important to me," said Liparulo. "Before diving into the Dreamhouse Kings, I read a lot of young adult fiction. It was disturbing how many YA stories pit adults verses kids; either the parents are absent or abusive. I think it's a cheap crutch: All stories need tension and doing it that way is easy, but I don't think it reflects the majority of families.

"Kids motivate and inspire me," he said. "I always get more out of my school presentations than they do. Kids love story — they could care less about the business of writing. They want to know about characters and why a story twisted this way instead of that way.

"They remind me of why I wanted to be a storyteller: because I love stories, not because I love the business," said the father of four. "Also, it's my hope that these kids will understand that they can live their dreams. They can be anything they aspire to be, as long as they pursue it with all their heart. It worked for me."

Liparulo's writing dreams began to come true when his dad was assigned to Lajes Field, 65th Air Base Wing, in the Azores Islands of Portugal.

"I'm one of those 'always knew I'd be a writer' guys — at least as far back as third grade," he said.

"When I was in fifth grade, I lived in the Azores Islands and the Concorde made its first transatlantic flight landing there to refuel. I got to watch it and I wrote about it for my teacher, who sent it in to a magazine without telling how old I was. About four or five months later, we got a check and the magazine in the mail because they had printed my article! As soon as I realized I could get paid to write, that was it," Liparulo explained.

"I remember reading House of the Seven Gables, Darby O'Gill and the Little People, The Legend of Sleepy Hollow, Moby Dick, The Strange Case of Dr. Jekyll and Mr. Hyde; I loved anything by Jack London," he said.

Yet I Am Legend by Richard Matheson moved young Liparulo most. "For about half the book, the main character, Robert Neville, tries to get a sick dog inside his home," said Liparulo. "When he finally does, he spends the night nursing it. Stroking the dog, he recalls the way things used to be. The last line of the chapter was: 'In the morning the dog was dead.' Not only was the dog cool, its death was symbolic of the death of life as it had once been.

"I started crying and I thought, 'If words — only WORDS! — can make me, a pretty tough 12-year-old boy cry, I want to do that,'" Liparulo said. "For years I went around telling people what I wanted to do when I grew up was make 12-year-old boys cry. It was then that I also decided I didn't want to be just a writer, but a novelist." 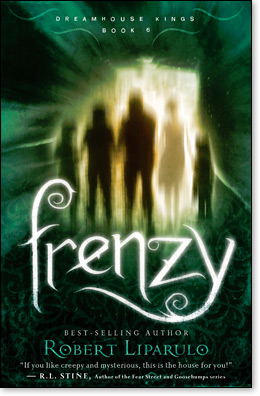 I don't know whether Bob Liparulo's books make boys cry, but tears streamed down my face as I read the climax of Frenzy.

"The inspiration for the Dreamhouse Kings was a dream," he said. When Liparulo was 11, he and his brother found an "amazing" antique playground in a wooded area of the Azores. So he wondered about the children who once played there and that night he dreamed that he could fly over it. Over the years, even after Bob Liparulo was married to his wife Jodi and had his own children, he kept dreaming about this historic place and at some point a haunted house began appearing in the dreams. In 2008, some three decades after discovering the playground, publisher Thomas Nelson released Liparulo's dreams to the world.

Adult fans of the Dreamhouse Kings series include parents, teachers, librarians and R.L. Stine, author of the Fear Street and Goosebumps books. Stine exclaimed, "If you like creepy and mysterious, this is the house for you! ... I loved wandering around in these books." That said, Liparulo is surprised to get more fan letters from girls than boys. And boy fans include young actor Slade Pearce, who befriended Liparulo and said, "This is my new favorite series!"

In Frenzy, Robert Liparulo thanks his wife and children, Melanie, Isabella, Matt and Anthony, "for everything." Anthony added to the plot, and Liparulo held contests for his readers to contribute scenes, compose music, and draw the characters. Learn more about the author and his books at DreamhouseKings.com. To book Robert Liparulo for your school, write to him at DreamhouseKings.com/have-robert-liparulo-visit-your-school.