July 31, 2013
President Obama tried to divert attention from his abuse of the American people by saying he had been profiled because of his skin color and he could've been Trayvon Martin.

Sybrina Fulton and Tracy Martin, mother and father of the late Florida youth, praised the president's speech as a "beautiful tribute" to their son. Maybe these grieving parents don't know that Obama and agitators such as Rev. Al Sharpton use Trayvon's death for their own wars against children, patriots and true freedom. Obama and Sharpton claim to be Christians, but they brazenly empower the No. 1 killer of black children: abortionists.

In addition to his abortion extravaganza at the Democratic National Convention, last year while running for re-election, Obama made an illegal White House commercial for the taxpayer-funded abortion chain Planned Parenthood – a chain that provides no health care, no mammograms; and a chain that has killed not only black babies, but some of their mothers.

Why don't the president and Sharpton urge black teens to stop playing the Knockout Game: a national trend of racism where black youths violently attack white men, women and children? Some victims have been murdered.

Meanwhile, Egyptians are protesting President Obama. They're saying the Nobel Peace Prize laureate isn't just a menace to Americans, but a menace to the world. 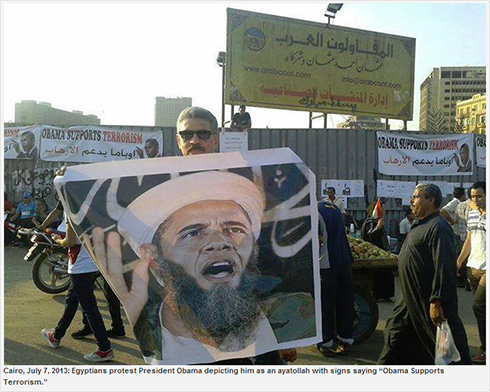 By Independence Day, American patriots were distressed by Obamacare, the president's callous neglect to rescue Americans in Benghazi, Libya, his illegal executive orders and nearly every federal agency doing his business, including the Justice Department and the DHS, the EPA, the IRS, the NSA, plus the Supreme Court. In the United States, Obama persecutes faithful Catholics, other Christians, Jews and everyone who believes in the fundamental human rights to life, liberty and the pursuit of happiness.

However, our spirits were lifted when the Arab Spring became the Arab Summer as some 33 million Egyptians took to their streets and ousted Muslim Brotherhood President Mohamed Morsi and with full support of their military – and many of them are speaking directly to the American people.

"We have been celebrating since yesterday evening. We did not sleep. The people of Egypt have peacefully regained their country," Patriarch Ibrahim Isaac Sidrak of the Catholic Copts in Alexandria told the Vatican's Agenzia Fides on July 4.

I've never seen it explained by mainstream media, but in the Middle East the term "conservative" applies to the tyranny of Shariah law, whereas "liberal" means liberty. Unlike Western liberals, Middle-Eastern liberals, especially Christians, don't call for the tyranny of Marxism, they cry out for freedom to exercise their natural rights to life, speech, religion, private property, enterprise and self-defense. 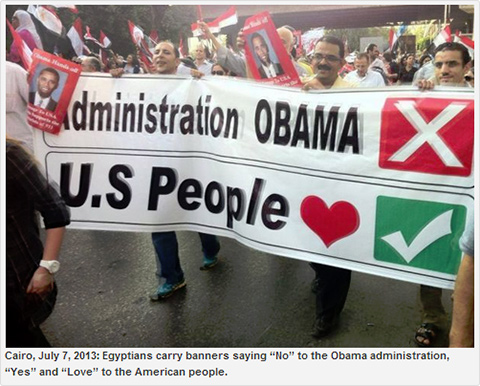 On America's Independence Day, former Member of the Egyptian Parliament Mohamed Sherdy passionately spoke to the American people but warned Obama and Congress on Al-Hayat TV.

"Dear Mr. President, dear President Obama. I'm talking to you now regarding the foreign policy that your country is having towards our country, towards third world countries," he said. "You have been backing up the wrong regime before the 25th of January, our first revolution and then you backed up again the wrong regime, which ruled us and was saying all the time that America is supporting them. ...

"Yes, we have overthrown our government. We overthrow our government and our regime because we do not want them to rule us. It is a golden opportunity for the whole world right now to move against groups like this."

"We cannot say that we do not have fears," Patriarch Sidrak explained. "The economic situation is worrying and makes everyone more at risk of being manipulated by the sirens of propaganda. Morsi's militant supporters feel they have lost and this can trigger feelings of revenge."

The very next day, 19-year-old Hamada Badr and three of his friends were chased to a rooftop in Alexandria because they supported the ouster of Morsi. A video shows that Badr was thrown off the roof, beaten to death by al-Qaeda operatives and a female onlooker is heard crying in horror off-camera. Of course al-Qaeda is the very same Muslim Brotherhood branch that murdered thousands of Americans on September 11, 2001. Still, Obama supports the Brotherhood and its various branches here and abroad, even using the MB's "jihad" agenda against Catholics and other Christians in the U.S. Armed Forces.

Cynthia Farahat, an Egyptian leader who fled the Muslim Brotherhood in 2011 and was granted asylum in the United States, translated July 5 threats by MB militants who declared they would establish a "Taliban-style state that harbors al-Qaeda" and wage jihad on Minister of Defense Abdul Al-Fattah Al-Sisi and Christians. They said, "We will destroy you and destroy Egypt and we will blow ourselves up in crowded areas and burn Christians alive."

The jihadists burned Christian homes, they tortured Coptic businessman Magdi Lamie, beheaded him and dumped his body as a warning. They murdered Coptic priests and non-Brotherhood Muslims.

Still other Brotherhood jihadists threatened war on America, Britain, Rome, and Catholics, whom they call "Crusaders." From Jerusalem,
The views expressed by RenewAmerica columnists are their own and do not necessarily reflect the position of RenewAmerica or its affiliates.