August 28, 2012
A small businessman from the old country kept his accounts payable in a cigar box, his accounts receivable on a spindle, and his cash in the cash register. One day his son said to him, "I don't see how you can run your business this way. How do you know what your profits are?" The businessman replied, "Son, when I got off the boat, I had only the pants I was wearing. Today your sister is an art teacher, your brother is a fine doctor, and you're an accountant. I have a car, a decent place to live, and a good business. I don't owe a thing to anyone. So you add it all up, subtract the pants, and there's your profit."

"Today the magnetic 'good life,' out there in the future, includes a four bedroom house in suburbia, at least two late-model cars, four weeks of vacation, the toys to go with it, and an income adequate for the payments. The happiness Americans crave is supposed to come with the independent lifestyle that allows us to do what we really want to do." [1]

One unknown poet in a prayer addressed our present preoccupations of self-indulgence in this fashion:

"Now I lay me down to sleep. I pray my Cuisinart to keep.
I pray my stocks are on the rise. My broker's investments wise.
That all the wine I sip is white. That my hot tub's watertight.
That racquetball won't get too tough. That all my sushi's fresh enough.
I pray my iphone and ipad still work. That my career won't lose its perks.
My microwave won't radiate. My condo won't depreciate it.
I pray my health club doesn't close. That my money market grows.
If I go broke before I wake. I pray my BMW they won't take."

Is this really what has become of the American Dream? This is far removed from an earlier time when the nation's attention was not so much on its possessions, but the quest to be a civil, just, righteous, freedom-loving, God-fearing, contented, thankful and generous people.

Katherine Lee Bates in that great patriotic hymn, America the Beautiful, expressed the real American dream that made us the most blessed nation in the history of the world:

"America! America! God mend thine every flaw,
Confirm thy soul in self-control, Thy liberty in law.

"America! America! May God thy gold refine,
Till all success be nobleness, and every gain divine.

"America! America! God shed his grace on thee,
And crown thy good with brotherhood, from sea to shining sea."

Yet our hearts are not focused on the divine, self-discipline, nobleness, or brotherhood. Our hearts are given to the pursuit of money, status, comfort, pleasure and power. Even our churches have become infected with false doctrines of health and wealth, which are not only unscriptural but anti-Christ. Anti-the-very-One who taught by word and life it is better to give than to receive — Anti-the-very-One who showed us that it is better to suffer disgrace, deprivation, and even death in worthy service of our fellowman than to be esteemed with riches and clout. Every major stride in American greatness was achieved on the back of such selfless virtue, not on how vibrant the economy.

Our politics betray how badly the American dream has been perverted. One presidential candidate says vote for me and I'll make certain you get various kinds of public assistance. Politicians have been doling out government doe for decades as a means of buying and keeping votes. The other presidential candidate talks almost exclusively about the economy, shunning the discussion of more important social issues — matters that pertain to the soul of the nation. And like the devil himself, both candidates promise that the stones can be turned to bread for us. We can have the status for which we yearn, if we just give them the power.

But promises of a better future are just an illusion if we fail to realize the real problems in this nation are not related to what we own, but to what owns us. As Gary Bauer, president of American Values said a few years ago, "A nation unable to distinguish between right and wrong won't solve the budget deficit. A nation of moral misfits eventually will become a nation of economic misfits. The economy and our moral fiber are linked together..." [2] 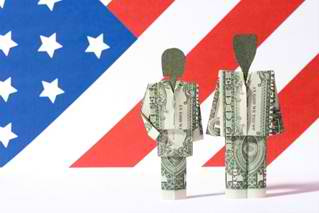 Recently Dr. James Dobson of Family Talk rightly opined, "[I]t is not enough for a national leader to talk about money (taxes, the economy, jobs, the deficit, etc.)." Doing so fails to reach the heart of the nation, he argued. Dobson was right. Most unfortunately, however, the politicians largely just reflect our own priorities. [3]

There is no sin in ambition, no wrong in seeking to make a profit, no evil in wanting something better for one's family, children, or nation. Nevertheless, "godliness with contentment is great gain." [4] Furthermore, Jesus strongly warned; "Watch out! Be on guard against all kinds of greed; for a man's life does not consist in the abundance of his possessions." [5]

What we desperately need is a restoration of the real American Dream, not the perversion of that dream which today is so submerged in the spirit of covetousness it neglects the weightier matters of character.