September 29, 2012
Sometime ago I read about a woman that lived out West, who looked out her window one day and saw a dead burro on the sidewalk in front of her home. So she called the city sanitation department and they sent some men out to dispose of the dead animal.

But when they arrived they found the woman had changed her mind. She didn't want them to cart off the dead burro. Instead, she wanted them to take it upstairs and put it in her bathtub.

The men were mystified at the request. Still, she enticed them with a promise of $20 a piece if they would do as she asked. Well, $20 was $20, and so they took the dead burro upstairs and put it in the bathtub. As the crew was coming back down the stairs, the foreman asked the woman, "Lady, you know it really ain't none of my business, but I can't help asking why in the world you would want a dead burro upstairs and put in your bathtub."

The woman replied, "Well, I'll tell you, it's like this. Every night for the last 35 years my husband has come home from work, he's taken off his coat, he's taken off his shoes, he's sat down in his easy chair, he's opened his paper and then yelled out, 'What's new?' Tonight I can't wait to tell him something that's new!"

Anything seemingly new today is popular and eagerly anticipated. Yet it's not the new that America needs to hunger so much as it is a restoration to the old. The message of judgment is nothing new, but if America doesn't heed that message of old and return to its religious moorings liberty cannot survive.

John Winthrop and his fellow Puritans traveled across the vast Atlantic in the spring of 1630, seeking to establish a nation squarely planted in the soil of Christian truth. Winthrop made a speech aboard the Arbella, describing this new nation as a "city upon a hill." America was to be an exceptional nation-state, born into covenant with God.

"When God gives a special commission," said Winthrop, "He looks to have it observed in every article...but if we shall neglect the observation of these articles which are the ends we have propounded, and, dissembling with our God, shall fail to embrace this present world and prosecute our carnal intentions, seeking great things for ourselves and our posterity, the Lord will surely break out in wrath against us, and be revenged of such a people, and make us know the price of the breach of such a covenant...We shall be made a story and a by-word." [1]

Some wonder if America is already under judgment. There is a sense in which sin itself is its own judgment, resulting in various forms of heartbreak and suffering. But a final judgment has not yet come to this nation. Just as God was willing to spare Sodom and Gomorrah for the sake of a righteous few, God reserves judgment now because the nation has not totally "dissembled" from Him. Nevertheless, the process of breaking away and being in full breach of the covenant America's forebears made with God seems to take place more rapidly every day. Certainly, the sword of God's wrath is justly poised to strike.

Many scoff at the talk of judgment. That's not new either.

When Seneca, the Roman philosopher, warned his day of the weakness of the Roman Empire, people thought it amusing. Rome was thought to be the eternal city. It was unbeatable. It seemed absurd to think that war, taxation, corruption in government, lawlessness, the breakdown of the family, subversion and general apathy would prevail. But it did — the impossible happened — the mighty Roman Empire fell — largely conquered from within.

Now the causes for the fall of Rome are increasingly prominent in America. Marriage and the family are under attack as never before. Heterosexual couples are rejecting marriage by the scores, while homosexuals erroneously clamor to be married. More than 50 million abortions are on record in the United States since the Roe v. Wade decision by the Supreme Court. The Obama administration has saddled this nation with a tax burden in the federal healthcare law higher than any in its history, not to mention all the ways stimulus spending has forfeited the future of the young. Pleasure and excess are an obsession with most people. America's armed forces which exist to defend the nation have been compromised as a social experiment for homosexuality. Religion is in a state of compromise too; mainline Christian churches are abandoning sound doctrine and the free exercise of faith is under siege. Unbelievably, the five main reasons for the fall of Rome are now glaringly evident in America.

America is at tipping point, it's either going to be revival or ruin. As the prophet Joel pictured life for his time, multitudes are in the valley of decision, "for the day of the Lord is near" (Joel 3:14).

Winthrop closed his speech on the Arbella by quoting the exhortation of Moses..."'Beloved, there is now set before us life and death, good and evil'." Then he added, "[W]e are commanded this day to love the Lord our God, and to love one another, to walk in His ways and to keep His Commandments and His ordinances and His laws, and the articles of our covenant with Him, that we may live and be multiplied, and that the Lord our God may bless us in the Land whither we go to possess it. But if our hearts shall turn away, so that we will not obey, but shall be seduced, and worship other gods, our pleasure and profits, and serve them; it is propounded unto us this day, we shall surely pass out of the good land whither we pass over this vast sea to possess it." [2] 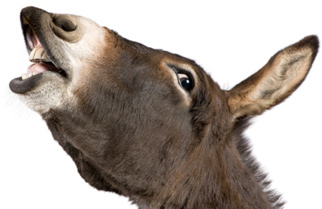 No, it's not something new America desperately needs — it's something old. America needs a renewal of old and timeless truths — a renewal of its covenant with God in Jesus Christ. Other proposals might claim to be something fresh, but they'll be about as useful as a dead burro in a bathtub.