Rev. Mark H. Creech
Are you afraid of dying?

October 18, 2012
Are you afraid of dying? You don't have to be in a life-threating situation to be afraid of death. Most people whenever they contemplate dying are afraid of it. It's the subject we like to avoid talking about.

But fear of death need not plague a person of faith. The moment a person trust God through Jesus Christ for the forgiveness of sins, an eternal relationship with God begins. The Scriptures say, "God has given us eternal life, and this life is in His Son. He who has the Son has the life; he who does not have the Son of God does not have the life. These things I have written to you who believe in the name of the Son of God, in order that you may know that you have eternal life" (I John 5:11-13).

That's incredible! According to the Scriptures, we can know for certain that we have eternal life. You don't have to wait until you die to know. The assurance is not based on how good a person has been in life. For the Scriptures teach, "By grace are you saved through faith; and that not of yourselves: it is the gift of God" (Ephesians 2:8). Therefore, anyone who has received the Son of God and believes on Him for the forgiveness of sins receives the free gift of eternal life.

Have you turned to Christ, placing your only hope of heaven in Him? Surprisingly, it's not the person who has been the most philanthropic — it's not necessarily the person who went to church every Sunday — it's not necessarily the individual who was more loving or more tolerant that may be assured of eternal life. It's not the person who never used drugs or struggled with alcohol abuse or was never sexually immoral that may be assured of eternal life. It's only those who have realized that they are sinners, having broken God's laws and are worthy of His judgment; yet looked to Christ for salvation, who may be assured that death ultimately has no power over them.

My family and closest friends know that I'm allergic to bee stings. It's so serious that whenever I've been stung, I've had to go immediately to the hospital. It can be as deadly for me as a rattlesnake bite. So there is a sense in which I scrupulously avoid, as well as fear, those pesky little critters with stingers.

Some years ago, however, I was upstairs on the second floor of the educational building in one of my previous pastorates and noticed a large wasps nest between the window screen and the window pane. I knew the window was closed tightly and that I was safe from the wasps. So to see what they would do, I couldn't resist tapping on the glass to alert them of my presence. Of course, they attacked me with a vengeance. Except, all the wasps were able to do was to menacingly "buzz" at me. I admit that they were very frightening. Yet, because of the window between me and them, I could not be touched.

The apostle Paul wrote, "Where, O death, is your victory? Where, O death, is your sting? The sting of death is sin, and the power of sin is the law. But thanks be to God! He gives us the victory through our Lord Jesus Christ" (I Corinthians 15:55-57). In other words, the power of death's sting is rendered useless against those who trust Christ. Sin alerts death of our presence. For the Bible teaches, "The wages of sin is death" (Romans 6:23). But because Christ died on the Cross for our sins, His substitutionary sacrifice stands between us and death's sting. Death can "buzz" and scare the wits out of us, but the believer who trust Christ can never be touched. 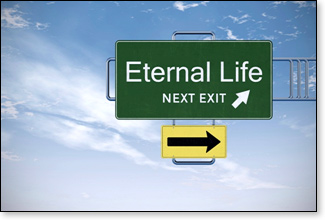 Oh yes, Christians die too. Still, the Bible teaches for the believer to be absent from the body (death) is to be present (living) with the Lord (2 Corinthians 5:8). And ultimately, just as Jesus was raised from the grave literally, so will all who believe in Him physically raise from the dead on the last day (I Thessalonians 4:16).

Perhaps this is your prayer: "Lord, I don't want to fear death anymore. I want to know that when I die that I'm going to heaven. I want to know for certain that I have eternal life. I acknowledge that I am a sinner and believe that Jesus died on the Cross for my sins. I believe He experienced the judgment of death in my place. I receive Christ into my heart to be my Lord. I ask that you give to me the free gift of eternal life. In Jesus name, I pray. Amen."

Trusting Christ can deliver you from the morbid, paralyzing, and torturous fear of dying.