October 20, 2012
Perry Noble is a choice servant of Christ, passionate for the souls of men. He is the founder and senior pastor of NewSpring Church in South Carolina — a fellowship that averages 16,000 people in attendance during services at a number of campuses throughout the state.

If you're a devout follower of Christ, you gotta love this guy because he obviously loves the Lord. He preaches plainly with conviction and authority.

But in his recent blog, Noble argues against the church's involvement in politics. He says he believes much of the church is misguided in its priorities, charging that "there would be way more celebration in many mainline churches if Mitt Romney won the election than there would be if one sinner repented of their sins..."

Noble also contends political involvement by pastors can lead their parishioners to believe that someone other than Jesus can save society. "We've got to remember..," he says, "while politics will try to control the world...the Gospel is the only thing that can change it...and yet the church house has seemingly fallen in love with the White House and has sold itself out to the impact that Jesus has called us to have on the world!"

Noble further contends that churches need to back away from efforts to pass legislation regarding abortion, homosexual marriage and other controversial social issues. Passing laws he contends won't stop the downward spiral of the nation. The only approach that will ever make any difference is if the church addresses the condition of the human heart. Sexual immorality, bullying, abortion, drug abuse, human trafficking, etc., Noble argues, will never change by an act of Congress, but only through the power of the Gospel.

His arguments sound so spiritual. His position allegedly rises above the filth of politics and exalts the church — well, please forgive the pun — to a "Noble-r" cause. I believe it's proper to make this assertion because his contentions are really neither biblical nor consistent with historical experience. Moreover, his arguments misconstrue what many conservative evangelicals are actually trying to do today in the public arena.

First, let's look at our model for all faith and practice, Jesus himself. Was Jesus' ministry strictly spiritual and void of anything political? Hardly! He launched a serious frontal assault on the cultural and religious authorities of his day. He not only demonstrated a form of civil disobedience by ignoring their rules and openly criticizing their policies, but he called them "hypocrites." (Matthew 23:15) He referred to Herod as a "fox" (Luke 13:32). Jesus' parable of the Good Samaritan had considerable political overtones, crossing the divide in its day between culture, race, and creed (Luke 10:25-37). The Savior's teaching to "turn the other cheek" was not only instruction for the way Christians should respond to persecution, but also a political strategy for overcoming evil with good — shaming and exposing the evil of oppression and using its power against itself (Matthew 5:39). Furthermore, make no mistake; it was for political reasons the authorities placed Jesus on the Cross.

Before Jesus, there was John the Baptist who rebuked Herod for his immorality and "all the other evil things he had done" (Luke 3:19). There's no question that what John the Baptist condemned publicly was not only spiritual in nature, but also political. And it was for political reasons Herod ordered, off with his head.

It's clear in Scripture that a person must be in right relationship with God through Jesus Christ to be positionally righteous. To know Christ is to repent of sin, receive Him and be born-anew. When a person is converted to Christ, he or she is clothed in the perfect righteousness of our Lord, placed in right standing with God, and empowered by the Spirit from the heart to live in a righteous manner.

Still, righteousness in the Scriptures means more. The word "righteousness" in Hebrew can also be translated as "justice." God declared through his prophet Amos, "Let justice roll on like a river, righteousness like a never-ending stream!" (Amos 5:24).

Jesus cared about this social aspect of righteousness too. The Revised English Bible accurately translates Jesus' statement in His Sermon on the Mount, "Blessed are those who hunger and thirst to see right prevail; for they shall be satisfied" (Matthew 5:6).

Noble essentially contends trickle-down morality doesn't work. The culture can't be changed by law, but only from the bottom up by concentrating on conditions of the heart.

Once again, his argument may appear sound, but it's flawed and civilization's record refutes it. The fact is there has never been a thoroughly Christian society. At no time in history since the birth of the church has a society ever been made good simply by focusing on the sinful condition of the human heart and the individual's need for personal salvation. It's a thoughtless and naïve proposition at best.

Consider the Second Great Spiritual Awakening in the early 1800s. Vast numbers of people were swept into the kingdom of God by an intensive campaign to reach the hearts of men with the claims of Christ. Yet despite its remarkable success, it did not break the hold of the injustice of slavery. In the Southland, Christian plantation owners simply adjusted their theology to accommodate the practice. It finally took a law advocated by Christian abolitionists who persevered against seemingly insurmountable odds that ended the slave-trade and made the black man and his descendants' free.

It should also be noted the church spoke out and lead the charge in times past on issues like child labor laws, legislation to protect wives who were beaten and abused, prison and asylum reforms. Around the world, it was the efforts of Christian missionaries who were responsible for ending cannibalism, headhunting, and the binding of women's feet in China. Furthermore, during the American Revolution it was a group of pastors, sometimes referred to as the "black regiment," because they donned black robes, who by their fiery preaching about the evils of tyranny and the God-given right to liberty that set the stage for a free society, not only in this country but around the globe.

Yes, this world would still be a very dark and foreboding place if the Christians that went before us had bought into the notion they should to stay out of the world of politics and just work for a moral consensus through their proclamations of the gospel. God forbid! 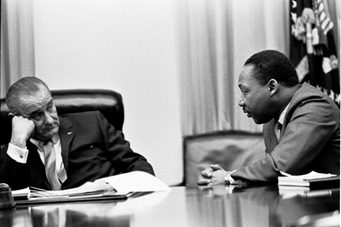 Does legislation make for a better, more moral society? Of course it does! During the Civil Rights movement, Dr. Martin Luther King, Jr. rightly said the assertion "legislation cannot really solve the problem and that it has no great role to play in this period of social change because you've got to change the heart" is a myth. He added, "It may be true that the law cannot change the heart but it can restrain the heartless. It may be true that the law cannot make a man love me but it can keep him from lynching me and I think that is pretty important, also." Indeed it is important. And without Christians in the vanguard of the public-policy debates of our time, bringing a righteous influence to bear on the political process, a vacuum is created that wicked people fill and their morality, or perhaps better said their lack of morality, is legislated and imposed on everyone.

Lastly, let me also add that I have been working with politically engaged pastors and Christian activist groups for nearly 15 years. During all this time, I have never met anyone from these ranks who ever entertained, said, or even implied one political party or politician could save America. The argument is a straw man. Worse still, it's an unfair and misleading judgment of their incredible contributions for Christ's sake.

But what I have witnessed are valiant efforts to win people to Jesus Christ, notwithstanding, also simultaneously seeking to engage the culture with the gospel. The church's role is not an either or proposition, but a responsibility to zealously do both.

The late Dr. D. James Kennedy was quite succinct in summarizing the doctrine. He taught, evangelism — bringing people to Jesus Christ is the means by which redeemed persons are recruited to transform society — and impacting the culture for Christ's sake is the means of reshaping society in order to produce the optimum environment for people to come to Christ.

No! Noble's remarks meant to discourage the church's role in politics may be well-intended, but they are not so "noble."