June 1, 2013
According to Recent Natural Disasters, a web site that reports on ecological cataclysms around the world every day, approximately 75 natural disasters have occurred in America just in the last 5 months. [1] Those disasters happening in various degrees of destruction include earthquakes, floods, landslides, hail storms, sinkholes, wildfires, avalanches, and deadly tornadoes. This nation in recent years has seen a rush of such disasters as wind, fire, rain and drought conditions. And these catastrophes are not in America alone, but happening around the globe.

Various reasons are offered to explain the phenomena. Some argue its global warming. Others say it's always been this way and the natural cycle of things, it's only that the reporting is much better today and we hear about these events more often.

Still, anyone with a little age and experience, or any one simply willing to carefully consider matters, finds it a bit hard to believe that what's been occurring of late is merely the natural cycle of things. The succession and intensity of these incidents have rightly caused people to sense something isn't right in the earth, and the scientific data alone can't effectively elucidate the cause.

Interestingly, the Old Testament book of Haggai describes a time much like our own, when the people of Israel were wondering why so many natural calamities had befallen them. Like many in our own day, they had considered every possible cause but God. Of course, they were too sophisticated, even to pious, to blame him. Yet God said to them:

"You counted on much; and see it came to little; and when you brought it home, I blew it away. Why? says the Lord of hosts. Because of my house that is in ruins, while you each busy yourself with your own house. Therefore, for your sake the heavens have withheld the dew and the earth withheld its produce. I called for a drought upon the land, upon the mountains, upon the grain, upon the new wine, upon the oil, upon what the ground produces and upon men, upon cattle and upon all the labor of their hands" (Haggai 1:9-11, The New Berkley Version).

In other words, God himself didn't hesitate to take the responsibility, saying, "I'm the reason you have experienced this terrible chain of horrific episodes – the storms – the drought – the scorching heat – the crop failures – the winds that blew everything away. I did it! And I did it because I wanted to get your attention about the way you have forgotten me and my business and focused exclusively on your own."

Certainly such explanations for the string of latest natural disasters, despite the fact that many of them have been apocalyptic in type, would soundly be rejected by most today – people who would never agree that God was somehow responsible. God is too loving – too kind – too compassionate – too gentle to ever do such a thing, they say.

This response brings to mind an old story about a farmer who was out in his field working a stubborn mule. The mule sat down in the mud and refused to budge. The farmer pushed and pulled, threatened and coaxed, but couldn't move the mule an inch. A neighbor who was watching nearby came over to offer some advice. "I've been watching you now for a while," said the neighbor. "And I think you may be going about this the wrong way." In frustration the farmer quipped, "Well then, how in heaven's name would you get this rascal mule out of the mud?" "Well," said the neighbor, "you need to use kindness – you need to be loving – you need to show compassion – you need to be gentle with the dumb beast. Let me show you how it's done." At that point, the farmer moved aside and the neighbor took a baseball bat and hit the mule square in the head. "What are you doing?" shouted the farmer. You said to be kind – to be loving – to be gentle – to show compassion. "I fully intend to be," said the neighbor. "But I've first got to get his attention."

One needn't think the natural disasters like the tornadoes that occurred recently in Oklahoma, or any other place where such tragic instances happen, ensue because the people in those locations are necessarily more wicked than others. Jesus warned against that kind of assessment in Luke 13:1-5, saying, "Unless you repent you will all similarly perish." But this unusual barrage of climatic catastrophes extended over several years ought to be seen as a wake-up call – God's attempt at getting our attention – the handwriting on the wall that God is ready to judge. God gets no pleasure in afflicting men. His actions are not retaliatory. His desire is to bless with kindness – to shelter, defend, and prosper. But if we insist on ignoring his Sovereignty, spurning his law, and exalting our own way paramount to his will, then we separate ourselves from the very source of all blessing.

God loves us too much to leave us that way without using whatever means necessary to move our gaze from downward to upward.

In 1787, George Mason, one of the largest plantation owners in Virginia, stated his views on national accountability before the Constitutional Convention:


"As nations cannot be rewarded or punished in the next world, they must be in this. By an inevitable chain of causes and effects, Providence punishes national sins, by national calamities." 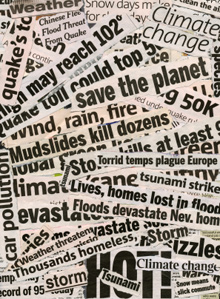 Perhaps the good news about God's disciplining hand on America, or any other nation for that matter, is best described in another quote from Dr. Charles Stanley. Stanley writes:


"The intensity of the storm... can be determined by God based on our rebellion and indifference. But also the depth of brokenness required can be equaled to the degree of usefulness God sees in His purpose for us." [2]


The series of disasters we are seeing – disasters of incredible force – cannot be naturally explained away. God is speaking. God is calling wayward people everywhere to himself. Perhaps if we hear that call nationally, if we heed his efforts to get our attention, greater hardship can be averted, and our best days are yet to come.