September 15, 2013
Our nation's forefathers strongly believed they were called into a new Promised Land for the purpose of establishing a New Israel, a model of the Kingdom of God – living proof that in God's economy people from every station of life could live in peace and prosperity together. They believed God's promises to Israel, barring those that were most specific to the Jews, were also pledged to any nation that would enter into a covenant relationship with Him. Basing our nation's principles of law and government on the Judeo-Christian ethic, they sought to initiate and admonished succeeding generations to maintain a covenant relationship with the Lord like the one made with the Israelites in Deuteronomy chapter 28.

No one better set the ground work and expressed America's destiny as an exceptional nation state than John Winthrop, who along with his fellow Puritans in 1630 traveled across the Atlantic to build "a city upon a hill." Winthrop stated in his speech aboard the Arbella:


"When God gives a commission, He looks to have it strictly observed in every article...Thus stands the cause between God and us. We are entered into covenant with Him for His work. We have taken out a commission. The Lord hath given us leave to draw our own articles. We have professed to enterprise these and those accounts, upon these and those ends. We have hereupon besought Him of favor and blessing. Now if the Lord shall please to hear us, and bring us in peace to the place we desire, then hath He ratified the covenant and sealed our commission, and will expect a strict performance of the articles contained in it..." [1]


Words to this effect were mentioned over and again by America's founding fathers and other leadership through the decades. The evidence to this end is voluminous.

In his 1996 book, Enough is Enough: A Call to Christian Involvement, author Rick Scarborough expounds upon the hope of this covenant (Deuteronomy 28), noting the ways our nation has experienced unprecedented blessing because of it:

Example: Prosperity throughout the land

Example: America is the breadbasket of the world.

4) Your calves and your lambs will be blessed (v.4)

5) Your basket and kneading trough will be blessed (v.5)

8) The Lord will send a blessing on your barn and everything you do (v.8)

Example: America's prominence throughout the world.

Example: America has the highest living standard in the world.

13) The Lord will open the heavens, the storehouse of His bounty, to send rain on your land in season and to bless all the work of your hands (v.12)

Example: America is the leader of the free world. [2]


Scarborough rightly contends that just as God abundantly blessed Israel and used that nation as an example to the world in ancient days, in more modern times He exalted America to show the world how He rewards those nations that devote themselves to Him.

But Scarborough is also quick to remind us of the warning in Deuteronomy 28:15: "However, if you do not obey the Lord your God and do not carefully follow all His commands and decrees I am giving you today, all these curses will come upon you and overtake you..."

Think of it. When a nation breaks its covenant with God, as America has characteristically been doing in recent years, the blessings start to turn into curses. Scarborough refers to many of these scourges in his book, which I have taken some liberty in updating the examples:


1) Your basket and kneading trough will be cursed (v.17)

Example: The birth of children, which are a blessing and the future of a nation are greatly limited in number by abortion and in various ways impaired via serious diseases, disasters, and death.

Example: Falling prices, rising costs, and the failure of farm-life.

5) Confusion surrounding everything you do (v.20)

Example: A serious lack of direction about what to do to effectively address the nation's problems.

Example: Hundreds of STDs, HIV and AIDS, and many other illnesses that are fatal – for which no known remedy can seem to be found.

8) The Lord will turn the rain into dust...it will (then) come down, until you are

9) The Lord will cause you to be defeated on the battlefields (v.25).

Example: Vietnam. A general inability to finally resolve a serious threat through

10) The Lord will afflict you with tumors and festering sores (v.27)

Example: Cancer taking the lives of thousands, with no cure actually in sight. AIDS, etc.

Example: A rise in mental disorders, depression, and anxiety.

Example: An explosion in political corruption and crime.

Example: The breakdown of marriage and the rise of infidelity.

14) The alien who lives among you will rise above you higher and higher (v.43)

Example: Serious immigration issues that put citizens of the nation at a disadvantage.

Example: The country has become a debtor nation and the national debt is out of control. [3] 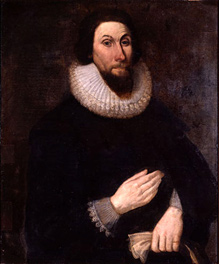 These judgments are not meant to be applicable in every individual case, but they are meant to be seen collectively as curses upon the nation for its disobedience.

Could there be any reasonable question America has abandoned its covenant with God? Though our beloved country has not experienced a final judgment, it is obviously already under judgment.

God help us. If the church doesn't repent of its own wickedness, and, if there is no great spiritual awakening, resulting in our nation renewing its covenant with God, then as a nation we are ultimately doomed.

In the same speech mentioned earlier, Winthrop warned of our final demise, saying:


"The eyes of all people are upon us. So that if we shall deal falsely with our God in this work we have undertaken, and so cause Him to withdraw His present help from us, we shall be made a story and a by-word through the world." [4]