October 6, 2013
Two good old boys were driving a semi-truck through the back roads when they came to an overpass with a sign that read, "Clearance 11'3."

Both of them got out and measured their rig. The rig was 12'4." "What do you think?" one of them asked as he climbed back into the cab.

The driver then looked to his left, then to his right, and checked the rear view mirror. "Not a cop in sight," he said, "let's take a chance." [1]

Rules, rules, rules – by human nature we're often bent toward breaking them at our own expense. We don't like them, but we can't live without them. Could you imagine a life with no parameters – no stop signs – no traffic lights – no speed limits? How about a football game where anything goes – no boundary lines – the wide receiver is in the stands ready to catch a pass – the defense is beating up the quarterback so he can't throw the ball. We couldn't have a universe if there weren't certain rules – a fixed set of standards that are absolute and inviolable.

God's rules are commonly referred to as the Ten Commandments or the Moral Law. One may look to the left, as well as to the right, scheming to break these, but no one can break God's rules without being broken by them.

It's true that in this dispensation of God's economy we're under His grace and not the law. But that doesn't mean our Lord has thrown his rules out the window. No one can earn his salvation by keeping the law, but no one unwilling to bring himself in line with God's law knows anything about real salvation. We aren't saved by the law. Still, when we are saved by trusting in Christ and His finished work on the Cross, God's Spirit comes to live within us so we hunger and thirst for His commands.

God's plan is also all-encompassing. We can't break up life and say God belongs here but not over there. God belongs in the church, but certainly not at a business Board room table. God belongs on a spiritual retreat, but not in the school's classrooms. God's law can be observed in one's personal practices, but never made into civil law. Yet, we don't get to set the parameters for God; He sets the parameters for us. And with God, there is no area of life off limits to Him. Life cannot rightly be divided in this way any more than God Himself can be divided. God is One and his purposes apply to everything.

Moreover, God's rules are without modification because God is unchanging. In their book, Legislating Morality, Norman Geisler and Frank Turek argue that despite much of the prevailing wisdom of our day morals are not relative. They site the following example:


"Several years ago a professor, who was teaching a class in ethics at a university in Indiana, assigned a term paper to his students. He allowed the students to write on any topic of their choice, only requiring them to properly back up their thesis with documented sources. One student, a relativist, wrote convincingly on the merits of moral relativism. He argued, 'All morals are relative, it's all a matter of opinion; I like chocolate, you like vanilla," etc. His paper was well written, properly documented, the right length, on time, and stylishly presented in a handsome blue folder. The professor read the entire paper and then wrote on the front cover, 'F. I don't like blue folders!'

"When the student got the paper back he was enraged. He stormed into the professor's office and declared, ''F. I don't like blue folders!' That's not fair, that's not right, that's not just! You didn't grade the paper on its merits!'

"Raising his hand to quiet the bombastic student, the professor calmly retorted. 'Wait a minute. Hold on. What's this you say about being fair, right, and just? Didn't your paper argue that it's all a matter of taste? You like chocolate, I like vanilla?'

"The professor responded, 'Fine, then. I don't like blue. You get an F!' 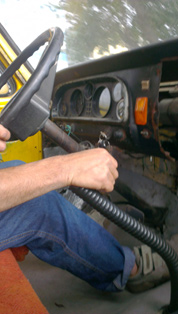 "Suddenly the light bulb went on in the student's head as he finally got the message. He really did believe in moral absolutes: at least he believed in fairness, rightness, and justice. He realized that he was charging his professor with injustice by appealing to an objective standard of justice. That simple fact defeated his entire case for relativism." [2]


Interestingly, the relativist is always affirming the very thing he's trying to deny.

Many today seem to think we've moved past the Ten Commandments. They believe, we've moved past the Bible and its teachings. The fact is, however, we haven't caught up to them! In Romans 2:15 we read that God's law has been written on the human heart – the human conscience. Deep down inside we know God's commands are not obsolete. We know that they can't be violated without paying a price.

In Ecclesiastes 2:13, it reads, "Let us hear the conclusion of the whole matter: Fear God, and keep his commandments: for this is the whole duty of man."

We should be so wise. To live any other way is as foolish as some yahoo who wants to drive a semi-truck though a space its not been designed to pass.