October 27, 2013
There is a place in western Chatham County, North Carolina, approximately 10 miles from Siler City that has baffled folks for many years. In a wooded area there is this well-worn path about forty feet in diameter in a perfect circle. In the center and outside of the round is lush vegetation, grass and other plant life, perfectly healthy, but absolutely nothing grows or lives in the ring-shaped track. At dusk, when people have placed rocks or sometimes even very heavy objects in the pathway, those same objects have been found the next morning to either been mysteriously brushed aside or unexplainably missing. Over the years, hunters who frequented the scene say that when their hunting dogs came upon the sphere; the dogs tucked their tails between their legs and cowardly scurried off.

Scientists and various researchers have carefully examined the place, but none can offer any explanation as to why no plant life grows in the path – nor can they explain any of its other unknown and troublesome subtleties. 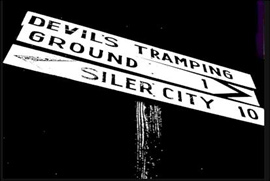 The site was first discovered by settlers who came to Chatham County before the 1800s. They gave the place its name, a name which remains to this day, "The Devil's Tramping Ground."

In his book, North Carolina Legends, Richard Walser shares the reason behind the name and offers the only explanation for the phenomena that has lasted through the centuries:

"Though no one ever saw him there, it was believed to be the haunt of the Foul Fiend, who came at night to tramp around and around in a circle, his head lowered, his expression intense. It was during these hours that Satan planned his evil schemes to undo mankind. At first light of morning he was gone, winging his way like a bat across the world to carry out his nefarious purposes. Yet so scorching had been his footprints on the ground of his circular pathway that the soil became infertile, and the nocturnal retreat of the hellish Prince of Darkness was shunned and avoided." [1]

In recent years, campers have been known to visit and stay at "The Devi's Tramping Ground" overnight. Having seen nothing they leave the evidence of their debaucheries behind – broken beer bottles, cans, cigarette butts and graffiti. Which at least for me says that if the legend were true and the Evil One did frequent the place in the past, he probably doesn't anymore because it's either too distracting or less than respectable enough a location for even the likes of him.

But don't misunderstand me, although no one can explain "The Devil's Tramping Ground," and no one really knows if old "Slew Foot" ever did use this remote place to plot his schemes, be assured the Devil is real and no laughing matter. He really does plot to undo mankind.

The Bible warns, "Be sober, be vigilant, because your adversary the devil, as a roaring lion, walketh about, seeking whom he may devour" (I Peter 5:8).

It's obvious his stratagems seem to be prevailing in our day. Recent polls show most Americans now believe the country is heading in the wrong direction both morally and politically.

The sad news is that the Devil can create terrible havoc, destroying many lives in the short-run. But the good news is he can never win in the long-run. He may thwart the purposes of God for a while; still his conspiracies and devices against God, Christ's Church, and a world that belongs to the Lord are doomed for utter failure.

That brings me to a second, but true story originating out of the Tar Heel state.

Back in the 1870s the Methodists of Swan Quarter, North Carolina, wanted to build a church. So they chose a lot they were convinced was the best location – one on the highest ground that would make the church most visible to everyone in the community. A church committee approached the owner of the property and offered to buy it. But the owner was absolutely opposed and said he had other plans for the space and wouldn't sell no matter the price. Disappointed, the committee was forced to look for an alternate site and settled for one near the waterfront and started construction.

Then in the Fall of 1876, when the church's edifice had almost been completed, a hurricane blew in from the sea. The streets of Swan Quarter were soon to be under several feet of water and the foundations of the new church wouldn't hold. The Methodists were astonished; however, as they watched from their windows the swelling waters literally lift the church like a ship and carry it down the street. Just as if there were a captain at the helm the structure took its course past the houses, businesses, etc., made a sharp right turn at the intersection, and then moved directly into the place that had originally been chosen. The building even amazingly twisted around to face the street and settle into the lot. 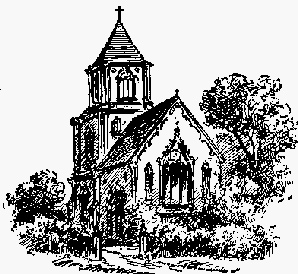 At the end of the storm, so taken aback by the whole event, the owner of the parcel of land got in a small row boat and paddled down the flooded street. He was looking for the chairman of the church committee that had sought to purchase the locale. When he finally found him, he instructed the man to come to the courthouse where he promised to sign over the lot free of charge to the Methodists, which he did the next morning.

Obviously, God placed the church right where he wanted it all along. And today it's appropriately named "Providence" and has a sign out front proclaiming it as, "The church moved by the hand of God." [2]

During this time when it appears the Devil's schemes are succeeding on every level – when it appears the Wicked One is winning – God is being ousted from public education and in the public square – when liberty is in danger of perishing – when the home is in great disarray – when socialism is on the rise – when the sexual revolution seems essentially unabated – when millions more innocent unborn lives perish by the surgeon's knife each year – when religious liberty is diminishing with each passing moment – fear not – do not despair – neither surrender the fight! These are but the Devil's ploys carefully planned from some tramping ground, but it will all ultimately fail. The kingdom of God is still advancing, Christ's church can never be stopped, God's sovereign hand is still moving in a world that belongs to Him and His will shall ultimately be done!!!