September 28, 2014
The Psalmist wrote, "Be wise now therefore, O ye kings: be instructed, ye judges of the earth. Serve the Lord with fear, and rejoice with trembling. Kiss the Son, lest he be angry, and ye perish from the way, when his wrath is kindled but a little. Blessed are all they that put their trust in him" (Psalm 2:10-12).

This passage of scripture is most instructive for those in public office. Although its application can certainly be made with a broad brush, it is most specifically addressed to those who would govern, instructing them to "Kiss the Son."

There is no question this verse penned by the Psalmist refers to Christ, the Messiah, the Savior of the world. The kings and judges of the earth are implored to welcome Christ, to honor him, to love him, to be unashamed of him and his sovereignty over all things. The great Bible commentator of the 17th and 18th centuries, Matthew Henry wrote that the Son should be kissed, "not with a betraying kiss, as Judas kissed him, but with a believing kiss...certain ruin will run upon us if we refuse." [1]

Indeed. And GOP candidates currently campaigning for office – candidates from the political party whose convictions about most moral and theological issues are typically closer to orthodox Christian teaching – ought to take heed.

Maggie Gallagher in a recent article titled, No Wave for the GOP, lamented the way that Republicans have been pursuing a failed strategy that avoids, downplays and mutes the social issues. She writes the current plan seems to be based in talking vaguely about economic issues, promising to help job creators, and waiting for the other team to self-destruct. But it's not working and according to the latest polls the GOP now has only a 50-50 chance of retaking the Senate. [2]

Gallagher suggests there needs to be a massive layoff of the highly paid GOP consultants who are essentially leading candidates to ignore such issues as abortion and marriage. She sites Monica Wehby's struggling campaign in Oregon. She argues that Wehby is the perfect test case for the RNC. She is "an attractive professional single Mom who is pro-choice and now pro-gay marriage. The Koch brothers have spent $1.6 million in TV ads, and yet Wehby's poll numbers show that she is losing ground – she "can't seem to move the dial closer with actual voters." [3]

In May, Napp Nazworth of the Christian Post also wrote about this issue in Is the Republican Party Ignoring Social Conservatives? In the article, Nazworth reported that three potential 2016 presidential candidates, Sen. Ted Cruz (Texas), Sen. Rand Paul (Tenn.) and former Arkansas Gov. Mike Huckabee, all downplayed the importance of social issues. [4]

GOP candidates are making a huge mistake with this approach. It will not work. It grossly fails to energize the base of the Republican Party. A GOP candidate wavering, waffling, or unwilling to ardently and consistently make the case publicly for such issues as the protection of life, the biblical definition of marriage and religious liberty are like the builders rejecting the stone that is the cornerstone of the building.

Instead, they should "Kiss the Son." They should unashamedly embrace his cause.

Certainly the opportunity is more significant than many realize. According to the latest poll from the Pew Research Center, Americans would like to see more religion in their politics. "[T]hose who think there has been 'too little' expression of faith from political leaders is up from 37 percent to 41 percent." With the number of people who say that churches should express their views on social and political issues up by six percentage points since the 2010 mid-term elections (43 percent to 49 percent), it seems clear people are concerned about the waning influence of religion in society, something they believe to be detrimental. Republican candidates unwilling to capitalize on such fundamental concerns of American life are throwing away what they need to push them over the top. [5] 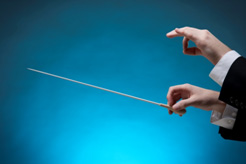 The late Dr. J. Vernon McGee once shared a story about the first time he witnessed a performance by a symphony orchestra. McGee said he didn't want to go, but some friends convinced him. When they went in and took their seats, he noted the musicians came out from the stage sides to tune their instruments. Some sawed their violins and cellos back and forth, the horns blew different notes, and it was a melody of discord, said McGee. But then the lights went out in the auditorium and the lights shined only on the stage. There was a hush in the building and a spotlight focused on the wings, and suddenly the conductor stepped out. There was thunderous applause. The conductor bowed, turned his back to the audience, and, as he waved his wand, McGee said he had never heard such beautiful music in his entire life.

"Oh, what harmony, what wonderful harmony there was," he said. I want to tell you added McGee, "Everybody is playing his own little fiddle today,...and it's a medley of discord. Everything is out of tune. But one of these days the spotlight is going on, and the Lord Jesus Christ will come. When he comes to this universe, He is going to lift his scepter, and everything that is out of tune with him is going to be removed. Then when he comes down with that scepter – oh, the harmony that will be in this universe!" [6]

Doesn't it make sense to "Kiss the Son" while there is still time? Doesn't it make more sense for candidates to really get on the right side of history – Christ's side? Whether Republican or Democrat, no matter what the consultants may be saying, no matter how much money donors give to a campaign, no matter how large a political party seeks to expand its tent, to fail to "Kiss the Son," to fail to speak-up boldly for what is dear to his heart, is to inadvertently set a date for disappointment, defeat, and disaster.