November 9, 2014
People that feel desperate, for whatever reason, can do the most dangerous things.

Back in the fall of 1993 the country of Armenia was desperate for sources of power. The nation was entering its third winter under a near total oil and gas blockade imposed by neighboring Azerbaijan as a weapon in the war between two former Soviet republics.

Just to survive, Armenians had been cutting down trees for fuel to heat their homes. More than a million trees had been cleared during the previous winter. In response, the government was ready to do the unthinkable: start up a rusting Soviet nuclear reactor that had been shut down during the 1980s because it was unsafe.

The Medzamor nuclear plant had been built during the 1970s. The outdated plant was without the necessary safeguards. It had no containment building to control the effects of any accidental radiation leak. Worst still, the plant was located in an earthquake zone only twenty-five miles from Armenia's capital city, Yerevan. A nuclear accident would unquestionably expose hundreds of thousands of people to deadly radiation poisoning.

Feeling desperate often causes people to choose things they ultimately live to regret. Turning to sin in a moment of despondency is very much like pinning one's hopes on a rusty, outdated, dangerous, nuclear power plant. [1]

Such thoughts crossed my mind recently when my eyes fell upon an article by Christopher Ingaham from the Washington Post. Ingaham noted that "the top 10 percent of American drinkers – 24 million adults over age 18 – consume, on average, 74 alcoholic drinks per week. That works out to a little more than four-and-a half 750 ml bottles of Jack Daniels, 18 bottles of wine, or three 24-can cases of beer. In one week." He adds, if you prefer you can simply look at this as 10 drinks per day. [2]

Ingaham says his figures come from Duke University's professor Philip J. Cook, in his book, "Paying the Tab." Cook also notes in his book, says Ingaham, "the top 10 percent of drinkers account for well over half of the alcohol consumed in any given year." [3]

These statistics on alcohol are similar to the data on gambling. Recently a report prepared for the Ontario Gambling Research Centre determined sixty percent of the revenue garnered from electronic gambling machines like slots and video poker are derived from problem gamblers. [4]

We're living in an age of emptiness, loneliness, fear, and anxiety – all of which create forms of desperation. Sadly, instead of running to God, the One who can really address these matters of the soul, most run from him. And like Jonah in the Bible, the man who took flight from God as fast and hard as he could, the devil always makes certain there's a ship ready and waiting to pick us up and take us far away – far away from God – far away from his blessed plan. Thus, also like Jonah, we find ourselves dwelling in the belly of the beast, slaves of alcohol, gambling, as well as other vices. 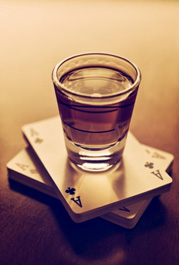 Christ can free the spirit from sin's bondage. Jesus urged people, "Come to me, all you who are troubled and weighted down with care, and I will give you rest" (Matthew 11:28).

Nevertheless, it is also incumbent upon a compassionate society to loathe and despise enterprises that knowingly and willingly prey upon human vulnerabilities for profit. In order for their ventures to succeed, the alcohol industry and the gambling business are dependent on addiction, taking away the freedom of others.

Its true people are free agents and set their own destinies. But it is equally true that loving one's neighbor as oneself; caring for the "least of these," means we don't render any of our fellow citizens as expendable.

Desperate people can do dangerous things. Turning to any vice for solace or peace is indeed much like pinning one's hopes on a rusty, outdated, nuclear power plant. But it is just as foolish for a society to think there's something meritorious in cranking these things up.