November 27, 2014
In the mid-1970s, Dr. George Sweeting, now former president and chancellor of Moody Bible Institute, said in a sermon something that has stuck with me through the years. Dr. Sweeting contended, "An unthankful nation is an unthinking nation, and its people are in mortal danger." [1]

Certainly this was the very reason our nation's predecessor's declared days of thanksgiving. They wanted us to stop and think from whence the source of our many blessings came. They knew that leaving God out of the equation would lead to our demise.

America has a rich tradition of giving thanks.

When the Jamestown colonists arrived in Virginia (1607), they erected a cross and gave thanks to God for safe passage across the Atlantic.

The English colonists at Berkeley Hundred in Virginia (1619) determined that the day of their arrival (December 4) should "be yearly and perpetually kept holy as a day of Thanksgiving to God."

After reaping a bountiful harvest, the Pilgrims at Plymouth, Massachusetts (1621), celebrated with their Indian guests and gave thanks to God. Thus, establishing what Americans commemorate as the "First Thanksgiving."

During America's fight for Independence from Great Britain (1777), the Continental Congress designated December 18th as a day "for solemn Thanksgiving and Praise." Patriots had just won a great victory at Saratoga.

President George Washington, our nation's first President, was also the first President to declare a national day of Thanksgiving (1789) for God's blessings and our new fledgling country's Constitution.

During the Civil War (1863), the 16th President of the United States, Abraham Lincoln, proclaimed the last Thursday in November as "a day of thanksgiving and praise to our beneficent Father." Succeeding Presidents would follow the same tradition. And in 1941, the U.S. Congress officially passed a law declaring the fourth Thursday in November as America's Thanksgiving Day. [2]

No one better encapsulated what it is that we should think and pray about on Thanksgiving Day than George Washington. His words in the first Thanksgiving Proclamation (1789) admonish us:

"For His kind care and protection of the people of this country,

"For the great degree of tranquility, union, and plenty which we have enjoyed,

"For the peaceable and rational manner in which we have been enabled to establish constitutions of government for our safety and happiness,

"For the civil and religious liberty with which we are blessed, and the means we have of acquiring and diffusing useful knowledge, and in general for all the great and various favors which He hath pleased to confer upon us.

"To pardon our national and other transgressions,

"To enable us all, whether in public or private stations, to perform our several and relative duties properly and punctually, 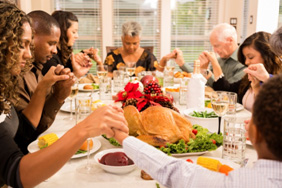 "To render our national government a blessing to all the people, by constantly being a government of wise, just, and constitutional laws, discreetly and faithfully executed and obeyed,

"To protect and guide all nations and to bless them with good government, peace, and concord,

"To promote the knowledge and practice of true religion and virtue, and the increase of science,

"And generally to grant unto all mankind such a degree of temporal prosperity as He alone knows to be best." [3]

Indeed. And to this end may we think carefully during the holiday and give earnest expressions of thanks to God, just as the country's forbearers did. For truly, an unthankful nation is an unthinking nation and its people are in mortal danger.