Rev. Mark H. Creech
The shepherds made haste: so should we

December 22, 2014
St. Luke's account says that on that first Christmas shepherds were on a hillside watching their flocks by night, when suddenly, the glory of God shone round about them and an angel appeared. The angel made a stupendous announcement, saying, "Have no fear, for behold I announce to you good news of great joy that will be for all the people; for today there was born for you in the city of David a Savior, who is Christ the Lord."

The shepherds were prompt in their response. They sought out the Christ-child immediately. The Scriptures say that they "came with haste." The Greek meaning for the word translated "haste" is "they jumped the walls on their way." Certainly this should be the response of every person to the gospel message – don't delay – make haste.

There is built into life an element of urgency concerning the things that really matter. Some things should just never be put off.

Perhaps you are familiar with that time honored story about the Board Meeting Satan called in hell. "We need to develop a new strategy for causing pain and suffering in the world," said the Devil to his senior advisors. "Which of you here has a suggestion for a new means of reaching people for our side?" he asked.

One demon suggested, "Oh Great Lord of Darkness, tell them there is no heaven." To which Satan replied, "No!!! That's an old trick and it won't work with most people."

Another demon advisor then spoke up, saying, "Oh Great Master of Mayhem, tell them there is no hell." "Forget it," said the Devil, "that isn't powerful enough either."

We see this principal taught most clearly in Luke chapter 9. Jesus says to a man, "Follow me." The man responds, "Lord, let me first go home and look after my father and after he has died, I will follow you." But Jesus said to him, "Let the dead bury their own dead; you go and preach the kingdom of God." That response by Jesus may seem harsh. Nevertheless, the point is abundantly clear: Jesus' invitation to follow him is always to do it now!

This week I was most intrigued as I listened to a fellow minister tell me his story of finding Christ. In his own words, he described himself as a drunkard. Night after night he visited the bars. One night while drinking, he said he felt deeply impressed, like the very voice of God, was telling him to leave that bar immediately and abandon that way of life. He said without wasting a minute, in his heart he surrendered to Jesus. He went home straightway and to the great surprise of his wife he took all the alcohol in his liquor cabinet and poured it out in his backyard. He said he's been sober ever since and following the Lord for many years.

The call to obey God is always an urgent one.

Someone once said, "The road to hell is paved with good intentions." It's not enough to say, "I'll do it someday." We're all creatures of habit and as time goes on the more engrained in our ways we tend to get. Chances are, if we don't make a decision to do what God tells us, we never will. That's human nature.

I'll never forget many years ago, when I was pastoring, I used to put-up sentence sermonettes on the church sign. I always earnestly prayed God would bless those sentences to reach someone for Christ. One week, I placed on the sign, "Delayed obedience is disobedience."

Months later, I heard a knock on my office door. A man walked in and introduced himself. He told me he had been passing by the church in his car and had read a sentence sermonette a while back that changed everything for him. He said to me, "You see, God was calling me to become a pastor. I had been resisting for years until I read what was placed on your church sign: "Delayed obedience is disobedience." He added that he was planning to get some training. We embraced and rejoiced together in tears for what God was doing in his life.

Again, there is an element of urgency about the things that really matter.

In the May 1984 edition of National Geographic, there is an incredible story with color photos and drawings depicting the swift and horrific destruction that overcame the Roman cities of Pompeii and Herculaneum in 79 B.C.

The explosion of Mount Vesuvius happened so quickly, inhabitants were killed doing the routine: men and women at the marketplace, rich people in their luxurious baths, slaves at toil. Everyone, even family pets were suddenly engulfed in deadly superheated gasses and volcanic ash. One can only imagine the panic.

But there were warnings all along. Scientists confirm what ancient Roman writers recorded – there were weeks of rumblings and shakings that proceeded the eruption. There was even an ominous plume of smoke visible days before the Mount exploded. They might have lived, if only they had wasted no time heeding the earth's call to get out of that place. 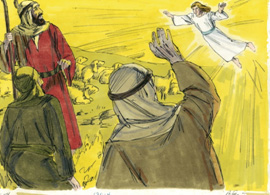 A word of advice: There are similar rumblings in the world today – signs of the times – the rise of false religion – the apostasy of the church – the prospect of war with weapons of mass destruction – terrorists attacks – complicated economic challenges – the breakdown of family and home life – the rise of lawlessness – rampant corruption in government – a moral meltdown of global proportions. These things are not exactly new, but they are indicative of a coming judgment. We should heed the warnings and hurry to find the safety God provides in our Savior, Jesus Christ.

When the shepherds heard of the salvation of the Lord, they made haste to find it – to experience it. So should we. The call of God is always to do it now – because there is always an element of urgency concerning those things that really matter.