February 22, 2015
When one thinks of myths, the mind typically races to those classical tales of the ancient Greek and Roman gods. In the Roman Pantheon were stories of the way the universe, the world, the gods and mankind came into existence. The story of Deucalion and Pyrrha is the Greek myth that supplants the biblical story of Noah and the Flood. Many scholars believe the reference in Genesis chapter 6 to the fame of "mighty men, men of renown," and their many exploits may be the roots of much classical mythology.

Often myths of old were an alteration of what God had actually revealed concerning himself. Distortion, perversion, and counterfeit are the ways of the deceiver, Satan.

However, myths are not exclusive to antiquity. Every culture has them and they are the means by which people seek to explain the world in which they live.

In 1986, Erwin Lutzer, wrote an incredible article titled, The Myths that Could Destroy America. The article is more relevant today than ever. Moreover, the ten myths Lutzer named when he wrote the piece are in full blossom now. This author cannot mention them all, but will speak of five. Make no mistake, these myths are as foolish and baseless in fact as the assertion Romulus and Remas were raised by a wolf.

First, The Battle Isn't Real. While America rots from within and hostile forces are determined to take away our freedom, said Lutzer, "our greatest problem just might be that there are too many people who neither know nor care."

"As humanism moves society farther away from Christian values, it will become increasingly intolerant of competing viewpoints...Christians have been painted in the same hues as the Nazis and the Ku Klux Klan. Because Christians believe in the freedoms that America has enjoyed for 200 years, they are considered the lunatic fringe. Make no mistake about the intentions of these secularists: It is to discredit the voice of Christians so that America will tolerate only one view. The battle line is between two religions: Humanism vs. Judeo-Christian beliefs," wrote Lutzer.

"History documents the final results of an intolerant humanistic state," Lutzer added. "According to some estimates, Chairman Mao of China is credited with the death of 30 million Chinese; Stalin 30-60 million Russians and Hitler 15 million people, of which 6 million were Jews. These people died because the state believed that matter was the final reality, hence there is no God, no immorality, no final judgment. God was dethroned and the state was put in its place."

Only a few days ago, the President of the United States compared Christians to terrorists and the Ku Klux Klan. Rather than name radical Islam as an enemy to the nation's freedoms, he instructed Christians not to get on their "high horse." In other words, the implication was unescapable; Christians, more specifically, conservative Christians from the political right, are apt to be as much an enemy to the state as ISIS or any other extremist groups.

Second, We Can Have Morality Without Religion. Lutzer wrote: "Morality and religion can never be separated. In fact, the very basis of morality is the existence of God."

"When the Supreme Court asked that the Ten Commandment be removed from Kentucky classrooms, they had no moral code to replace them. Logically, all that would be left is a blank wall. When religion is removed, morality goes too. Ironically, humanists at times do talk about morality. But when they do, they piggy-back on the Judeo-Christian ethic. When they believe in human dignity, freedom and peace, they are assuming a theistic view of the world. We have not seen the full result of humanism in the United States, because we are still coasting on the values derived from our rich Judeo-Christian heritage," Lutzer argued.

Lutzer was right. Nevertheless, since the writing of his article, America has had two generations of youth brought up in a public school system with certain inherent assumptions that raise the stakes considerably. They've been taught God is optional and man is supreme. Mankind evolved from lower forms of life and he is not the result of a special act of creation. Man is an animal and not a living soul made in the image of God. Man is inherently good, not seriously broken, sinful, and in need of a Savior. All adverse behavior can be explained in forms of maladjustment. Man's environment is to blame for evil, and, therefore, he isn't really responsible for his malevolent actions.

Youth today are extremely confused about right and wrong and turning from the church in droves? Is it any wonder drug and alcohol abuse, violence in the schools, materialism, sexual abuse, sexually transmitted diseases, and a serious erosion of national pride and identity is growing? To say that most of the country's youth have had no religious training either in school or the home is not meant to be disparaging, but only to acknowledge a simple statement of fact. And the fact that these folk are slated to take the reins as godless adults should cause great consternation.

Third, Whatever is Legal is Moral. Lutzer contended, "The Supreme Court, influenced by the humanistic trends, has helped to brainwash our people to believe that whatever is legal is moral. They would argue that there is no law above human laws."

But, "[t]his is not the case of our founding fathers. Whether individually Christian or not, there was a general consensus of theism, the belief that God existed and the new Republic was based on this foundation. This understanding profoundly influenced their view of law and government. As the Christian worldview has faded, America has turned not to the laws of God, but to what Francis Schaeffer called 'sociological law.' Law is only what the majority wants, or what the judge says it is," said Lutzer.

Again, Lutzer's warning has come full circle. In a few months the Supreme Court will decide whether same-sex marriage should be legal across the country. If the High Court decides there is a constitutional right to same-sex marriage, then the fundamental assumption that law should be based on "the laws of nature and nature's God" will be thoroughly tossed out. Christians who believe same-sex relationships are immoral will be constantly pressured to surrender any opposition. Because if the High Court says it's legal, then it must be moral.

Fourth, Morality Cannot Be Legislated. Lutzer argued, "Secular humanists would like us to believe that they are broadminded, pluralistic and neutral in moral matters. They are opposed to censorship, sectarianism and intolerance. The media has done a successful job of getting the American people to believe that it is the so-called right wing religious fanatics who are seeking to 'impose their morality on society'...But all laws are an imposition of someone's morality. That is why the statement, 'You cannot legislate morality' as it stands is absurd. Secular humanism is imposing its own morality on the American public. It does so through the media, the schools and the courts.

Lutzer further contended, "No law is neutral. Every law imposes some form of morality on society. Abortionists impose their morality on the unborn. Homosexuals want their views flaunted in the public school class rooms. Atheists want religious influence excluded from public life."

The applications here are so clear in light of today's current events, only the willfully blind would not see it. 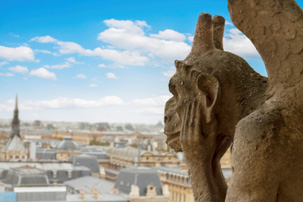 Fifth, The Church Should Have No Voice in Government. "In the early days of America," wrote Lutzer, "Christians took leadership in the government without any thought that Christianity and politics don't mix. Only after the modernist-fundamentalist controversy did fundamentalism withdraw from the political arena."

"That gave the secularists a grand opportunity to entrance themselves in the political process," he concludes.

Every week, this author, who is not only the executive director of a state-wide Christian public-policy organization, but an ordained pastor of more than thirty-five years, tries to convince churches and clergy from Scripture to engage in the political process. But unfortunately, the response by most of the church is exceedingly lethargic. Part of the problem is many Christians have embraced some or all of the myths mentioned in Lutzer's article.

Countless mainline churches have even departed from sound doctrine. They are like Israel of old in her days of idolatry and spiritual adultery, relying on the world and its false teachings rather than God's holy word.

America is on the brink of a total disaster. Although there is still hope, the situation grows darker every day.

John Henry Jowett once declared something pertinent to our time. He said, "The multitude is not sick of Jesus; it is only sick of his feeble and bloodless representatives. When once again a great church appears, a church with the Lord's name in her forehead, a church with fine muscular limbs, and a face seamed with the marks of sacrifice, the multitudes will turn their feet again to the way of God's commandments."

It is time to cast down the idols – time to put away the myths of this age – the distortions, the perversions, the counterfeits of God's truth – time for the church to do some myth busting.