June 21, 2015
There's a story about a family that talked the Mother into getting a pet hamster. They promised that they would take good care of the little creature.

Two months later, when the Mother was having to take care of Danny, the hamster, exhausted with the extra duty she made a few phone calls and found a new home for him.

She broke the sad news to the children. They took it quite well; but they did offer a few comments. One of the children said, "He's been around here a long time – we're sure gonna miss him." Mom agreed, saying, "Yes, I know, but he's just too much work for one person, and since I'm that one person that has to give him most of the attention, I say he goes." Another child remarked, "Well, maybe if he wouldn't eat so much and wouldn't be so messy around the house, we could keep him." But Mom was firm and insisted, "It's time to take Danny to his new home. Go and get his cage." With one voice and in a tearful outrage the children shouted, "Danny? We thought you said, 'Daddy!'"

That's similar to the little boy who defined Father's Day like this: "Father's Day is just like Mother's Day, only you don't spend as much on a present."

Another child once put it this way: "Mommy, if the stork is supposed to bring babies, if Santa Claus brings gifts, if the Lord gives us our daily bread and Uncle Sam our Social Security, why do we even keep Daddy around?"

Kidding aside, unfortunately, we are living in a time that grossly underestimates the importance of fatherhood. Dad isn't someone who is optional to the family. His role is absolutely essential. What is more, fatherhood is foundational to a healthy and thriving culture.

According to the National Center for Fatherlessness, almost every social ill faced by our nation's children is related to fatherlessness.

Fatherlessness breeds poverty. In 2012, children living with a single-mother had a poverty rate of 47.6%, over 4 times the rate in married-couple homes. [1]

Children without a Dad involved in their lives are more apt to get into trouble with drugs and alcohol. "The U.S. Department of Health and Human Services states, "Fatherless children are at a dramatically greater risk of drug and alcohol abuse." [2]

Studies show that kids with a residential father or father figure in their lives fare much better physically and emotionally. They have "significantly fewer externalizing and internalizing behavioral problems." Children of single-parent homes are twice as likely to commit suicide. [3]

Children who live with their married Dad actually test better in school than those just living with a non-biological father. Interestingly, if Dad is involved with his children's education, it's a higher likelihood the child will get A's. This is true for fathers, stepfathers, and even fathers heading a single-parent household. [4]

These statistics remind me of an illustration given by Gordon McDonald in his book, The Effective Father. McDonald described an exciting moment with his sons while canoeing down a treacherous stretch of rapids. He said the water was running furiously, smashing around over rocks, here and there climbing to gunwale high waves." But then he said the canoe tipped over and they were upside down in freezing water. Everything turned out alright, but McDonald said he saw the experience to be like that of fatherhood. A father has to be like a man steering a canoe, always looking ahead for the dangers. The effective father, he said, has to look downriver in the life of his family, preparing to make wise decisions, with the intent of keeping the family dry. [7]

Steering that canoe safely down the rushing waters with its many dangers is a big job – a really big job – one that should never be underestimated in its importance!

Still, there is one other role of being a father that's not been mentioned and happens to be the most important – the responsibility of fathers to be the spiritual leader in the home.

In the book of Acts there is a story about the apostle Paul and his companion Silas being persecuted, beaten, and unjustly jailed for their faith. They were singing hymns and praying in their bonds when God sent an earthquake to deliver them. When their jailer saw the power of God, he asked them, "Sirs, what must I do to be saved." They answered, "Believe on the Lord Jesus Christ, and thou shalt be saved, and thy house."

By the phrase, "and thy house," Paul and Silas were not saying that if the jailer would believe, then all his family members would automatically be saved too. What the text does imply, however, is that when the father believes and takes his rightful place as spiritual leader in the home, when he exemplifies a genuine and dynamic faith in his own life, generally speaking, the family will follow his direction. 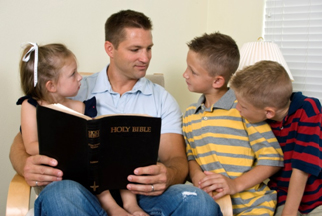 Research seems to bear this out as well. Some statistics reveal that regardless of the church-going mother; between 45 and 75% of children will attend church as they mature if the father attends regularly. By contrast, a mother who attends regularly and a father who doesn't go at all, only 1 child in 50 will end up attending church regularly. [8]

The point is not to associate salvation with church attendance, but only to say that the father's spiritual influence, characteristically, is the most potent. Why? It's because in our most formative years, we tend to base our first concept of authority, on who God is, and what he requires, in what we see in our earthly fathers.

What bigger job could any father have than that? – representing God to the family. Spiritual success in life, even the issues of heaven and hell are at stake.

Again, Dad's role is not optional to the family, its essential! It should never be underestimated. In fact, we could legitimately conclude that if fathers would be fathers, it would be all the activism necessary to turn this country around.