August 30, 2015
Edwin Hubbel Chapin once said, "Through every rift of discovery some seeming anomaly drops out of the darkness, and falls, as a golden link into the chain of order." If ever there was a "seeming anomaly" in the chain to enforce the orthodoxy of political correctness, it's Vester Lee Flanagan, also known as reporter Bryce Williams.

Flanagan murdered Alison Parker and Adam Ward on live television while they were reporting on a feature story for WDBJ in Virginia. Parker was the reporter and Ward was the cameraman.

The incident might be chocked up as nothing more than another tragic situation of workplace violence except that Flanagan said in a 23 page letter to ABC News the killings were out of his anger over "racial discrimination, sexual harassment and bullying at work." Although his claims of inequity were proven to be unsubstantiated, he said he had been "attacked for being a gay, black man." He also claimed the Charleston church shooting in June ought to have provoked a race war and the incident was the inspiration for his dastardly act.

So if Flanagan had not turned the gun on himself, taken his own life, but lived, one can only wonder if the two murders he committed would have been deemed a hate crime. Parker and Ward were both white and straight. Flanagan was black and gay. So what happens when a black gay man guns down two white straight people expressing his motives are connected to issues of race and homosexuality?

Ben Shapiro, Senior Editor-At-Large for Breitbart News and a New York Times bestselling author, noted in a column about the incident:


"Had a white straight man killed a black gay man, released a first person tape of the shooting, and then unleashed a manifesto about being victimized by affirmative action and anti-religious bigotry from homosexuals, the media would never stop covering the story. They'd be eager to report that shooter's motives with all the attendant politically correct hullaballoo about the racism and homophobia of the United States more broadly. We would hear about white supremacy. We would hear excoriations of the Republican presidential candidates for their failures to stand with the Black Lives Matter movement – and their opposition to same-sex marriage..."


Indeed, we would. And, Shapiro goes on to rightly argue that the media is more likely to depict Flanagan simply as an "outlier" and focus the conversation on the supposed need for gun control. But what about a question that goes to the heart of the matter, would Flanagan's crime be deemed a hate crime?

It would seem to fit the category. The federal government defines a hate crime as "any criminal offense...which is motivated, in whole or in part, by the offender's bias against a race, religion, disability, sexual orientation, or ethnicity/national origin." Flanagan's rage vented on Parker and Ward seemingly wasn't just against them for personal offenses, but as representatives of his perceived white, straight, anti-gay oppressors. Whether they were burning a cross on a lawn or carrying out a lynching, the Ku Klux Klan used the same twisted rationale against blacks and gays.

Flanagan's maniacal act also seems to fit the various justifications given for hate crime laws. Hate crime laws carry tougher penalties because they are deemed to be more brutal in nature, allegedly do more psychological harm, and, as a bias motivated crime hurt innocent third parties. In other words, the crime not only targets a certain victim, but is directed at a group. Over and again, via news footage, the public witnessed an excessively brutal act of wanton murder by a man filled with hate who meant to do psychological damage to millions, while striking out against all people who would discriminate on the basis of race or sexuality.

Still, everyone knows had Flanagan not committed suicide, it's highly unlikely he would have been charged with a hate crime. Even though others have been charged with the same for less than what he did – some for just using derogatory language. Why? Because hate crime laws are not about equal justice under the law as our constitution demands, they are instead about tipping the scales in favor of people from protected groups and not others.

Violent crime should be punished under the same standard no matter the victim.


"[U]nder the hate crimes regime, the law no longer regards 'man as man,' but as a member of a group. Equal justice gives way to a system of 'preferential justice,' in which, as novelist George Orwell put it, 'All animals are equal, but some animals are more equal than others.'"


"Hate crime statutes codify legal distinctions based on race, ethnicity, national origin, gender, and sexual behavior. They alert all Americans to these distinct identities and reinforce, magnify, and fix in place group conflict by using the law to make them legitimate. The media reinforces these divisions by showering attention on crimes purported to be motivated by prejudice...Based on differences in race, gender, religion, or sexual conduct, such factionalism is moving our society toward the 'disuniting of America.' Some are calling this a 'new tribalism.'" 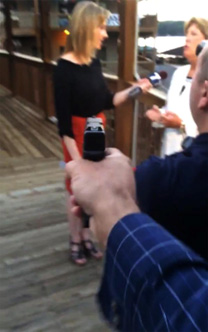 Such laws work to create, as Aman asserts, "a perverse incentive to seek victimhood, since victimization enhances a group's 'moral claim on the larger society,' and, therefore, it leverages political power." Quoting Shelby Steele, Aman adds, "The power to be found in victimization, like any power is intoxicating and can lend itself to the creation of a new class of super-victims who can feel the pea of victimization under twenty mattresses.'"

News reports indicate as Shapiro wrote that Flanagan "marinated in his self-appointed victimhood status." He sought to use it as power over the places where he worked, but officials dismissed his complaints. He was constantly looking for people to say something to which he might take offense.

Flanagan is not alone in such behavior. Except for the act of murder, his worldview either to a greater or lesser degree is becoming a national phenomenon.

Is this what we've come to in this country? Whatever happened to that greater, former set of ideas about personal responsibility and impartial justice that were our compass and not identity politics?

The point here is hate crime laws may have been enacted with the intention of protecting weaker and minority groups, but such laws and the politics surrounding them, have instead worked to enhance separatism, fueling and magnifying prejudices and antagonisms. They have exacerbated feelings of victimization, even to the point of violence.

If Flanagan's fury is suggestive of anything, it has a connection to this. Moreover, Flanagan is the anomaly indicative of our country's need of God's grace in Christ to cleanse away the hate and partiality against any man or group – something no law can do.