November 15, 2015
Last month, the North Carolina Child Fatality Task Force released a report that said youth suicides increased more than one-third between 2013 and 2014. It said that 46 children died by their own hands last year, 34 the year before, and 23 in 2010. The increase has experts worried, and they plan to tackle the issue with a task force committee meeting in February.

Michelle Hughes, executive director of NC Child, told the Associated Press (AP) "[e]very child who dies by suicide is a preventable strategy." Hughes will be the task force committee chairwoman. The committee is expected to bring recommendations to the North Carolina General Assembly for consideration when they reconvene in April of 2016.

Hughes also told the AP that multiple issues were at the bottom of children taking their own lives, "including high anxiety, mental illness, bullying and negative family situations." She added for many young people today "life can seem very overwhelming."

In a recent press release, Christian apologists and author, Alex McFarland, addressed the issue saying there has probably never been a harder time to be a teen. "Youth are facing hopelessness and despair that is directly connected to their view of the world. And this world isn't going to get any easier, so we must all rely on a different resource to get carried through this world, which is Jesus Christ."

"Despite this seemingly increasing downward spiral, there's still hope," said McFarland, "hope in a God who loves this generation and is not done with them yet. And that need and that hope is universal. Those who are down and out, as well as those who are up and out, need Jesus."

Suicide is not something most people want to think about, much less consider that it's the number two killer of our youth and on the rise. But it's happening.

Someone has said, "Suicide is a lonely way out with no way back, a permanent solution to a temporary problem."

Something else that can exacerbate the intense pain youths feel which can lead to suicide is drug and alcohol use, risky sexual behavior, or something similar. Teens turn to these behaviors for the same reasons some adults turn to them – to dull the pain. But it doesn't work in the long-run; instead it can make matters more complicated and ultimately worse.

When I was in my mid-twenties and suffering from a terrible bout of depression, I seriously contemplated suicide. Plagued with unresolved emotional conflicts from my youth, I bore constant floggings from self-inflicted perfectionist personal standards. I lived quietly in a living hell but put up a good front every day as though nothing was wrong.

It's hard for someone to identify with how bad a person considering suicide is hurting unless they've been there. You can feel so low and anxious that it's easier to face the prospect of death than it is tomorrow.

One day, thank God, I reached out to someone for help. I let a good friend into my darkness, and he recommended a Christian counselor. I made an appointment and went to see him.

I must confess that even though I was a Christian until I spoke with this counselor, it never really registered with me that my faith was about a lot more than personal salvation and going to heaven. I would discover that Jesus was the answer to every longing of my heart.

My counselor shared with me these thoughts: 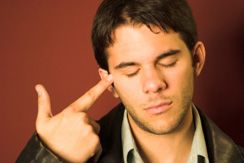 In the moment of my greatest pain and misery, these words brought me hope and stayed my hand from taking my own life.

Although I didn't layout each of the Bible verses that substantiate these points made by my counselor, they are still undeniably not simply his words, but God's.

Whether an adult or teen, if you are thinking about suicide, it may seem as though your world is impossibly bleak. But take it from someone who has been where you are, God is the God of the impossible, and he still has great plans for you.

Reach out for help. Don't give up. Look to Christ. Despite how you may feel, if you will trust him implicitly, things will get better.