December 12, 2015
The late Dr. James Montgomery Boice in his commentary on Christ's Sermon on the Mount tells the story of a young boy from England walking along the streets of Harrow, who came upon an indigent man's funeral.

The poor man's body had been put in a coffin of inferior workmanship and pushed through the street on a hand-drawn cart. The men who escorted it, apparently inebriated, wove their way through the streets while singing their drinking songs and telling lewd stories.

While on their way up a hill to the graveyard, the coffin slid off the cart and broke open. To a bunch of drunks the whole scene was hilarious, but to onlookers it was disgusting. So moved with sorrow at the sad scene of depravity, this young boy declared to himself, "When I grow up I am going to use my life to see that such things never happen."

That young boy, Boice reveals was Lord Shaftesbury, the mighty English social reformer, who probably did more to improve the lives of the common man in England during the 19th century than any other person.

Boice said that Christ's words, "Blessed are those who mourn, for they shall be comforted" (Matt. 5:4), can refer to such sorrow.

Boice wrote, "To each of us, therefore, the second beatitude is a call to involvement in the social arena – in the struggle of blacks for true equality, the plight of underpaid workers, pollution of our natural resources, education, ethical problems in politics, medicine, and business, and other contemporary problems – just as Christians were formerly active in the war against slavery, child labor, lack of freedom of the press, and immorality. We should mourn for such things. And we should mourn deeply enough to do something about them."

Recently I was interviewed as a guest on a local television talk show. I shared with the host much of the motivation behind my Christian activism as head of the Christian Action League of North Carolina. "I have eight grandchildren," I told him, "and I want them to remain free. I want them to enjoy the liberty that you and I have enjoyed and taken for granted for all of our lives. Liberty is now in great jeopardy, not simply because of the policies in place in our nation, but because we have forsaken and abandoned God."

It's not noticeable in the video, but when I made those remarks my eyes welled-up with tears and I struggled to keep my emotions in check for the sake of the program.

Still, let me say, I am not ashamed of those tears. I am not ashamed of such sorrow. I believe it is the work of God's Spirit. I think I am experiencing the very heart of God, who himself mourns for our wayward nation and the tragic consequences certain to befall it unless we repent.

Luke chapter 19 records the time when Jesus approached the city of Jerusalem and wept over its impending destruction forty years before it happened. Jesus knew Jerusalem's inhabitants had thoroughly rejected the way of God. He foresaw their judgment and the utter destruction of the Temple. He wept not only over the intense suffering that was sure to come, but over the foolish stubbornness and unbelief of the people.

We appear to be living in just such a day, and the end result can only be painful for us too.

But let me also add that sometimes tears shed, sincerely borne out of concern for the plight of others, can result in things being turned around, changed, and made for the better.

In his Guidebook for Pastors, the late Baptist preacher, W.A. Criswell tells a remarkable story about a traveler who made a long journey to the church of the famous pastor, Robert Murray McCheyne.

McCheyne is said to have died at the mere age of twenty-nine from literally burning himself out for God. 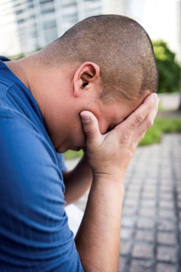 When the visitor arrived, he was exceedingly frustrated to learn McCheyne was away. The man had come for miles earnestly seeking to discover what made the minister tick – what made him have such a profound impact on Scotland and the religious world.

Perhaps if God's people had that kind of burden for the severe spiritual and political needs of our time, and perhaps if we would mourn deeply enough to forget ourselves and sacrificially do something to address those needs, a few tears shed by us might avert much weeping by the masses later.

The Psalmist admonishes: "He that goeth forth and weepeth, bearing precious seed, shall doubtless come again with rejoicing, bringing his sheaves with him" (Psalm 125:6).