March 12, 2016
Abraham Lincoln once said, "I have been driven many times to my knees by the overwhelming conviction that I had nowhere else to go. My wisdom, and that of all about me, seemed insufficient for the day."

Ethel Barrymore once noted, "When life knocks you to your knees – well, that's the best position in which to pray, isn't it?"

My days are typically riddled with the negative. Whether it's some serious matter I read or heard about from the news media, whether it's a sad report from a family member or friend, whether it's the burden I bear watching our nation headed for a precipice, whether it's the anger I experience because of the crimes I witness, whether it's the unfair offenses I suffer and their temptations to make me bitter or unforgiving, whether it's a health issue, whether its finances, whether it's my personal shortcomings of the heart or the head weighing me down, there is nothing better to put things in proper perspective than prayer.

During the fledgling years of our nation Thomas Paine said, "These are the times that try men's souls." No truer words could be said for our own.

Not to be showy, nor to exude a superior religiosity, but only in the hope of encouraging the discouraged, allow me to share a prayer I wrote a few days ago:


"O God, you created both the heavens and the earth. By your Son, Jesus Christ, were all things created. All things were created by Him and for Him.

"The heavens declare your glory, your inexhaustible power and majesty. The heavens show your incomparable abilities.

"You formed the earth. You made and established it. You did not create it in vain, but in it determined an eternal purpose.

"You made humanity. You created man in your image, both male and female. You made mankind your vice-regent in the earth and placed him in the Garden of Eden. But the human race rebelled against your will, even as the serpent that tempted us had done. Consequently, our lot has been one of tragedy and loss, the worst of which has been our blindness to the beauty of your character – the very image from which we were made.

"Our Creator Redeemer recreates us afresh. He makes us new from within. He removes the scales from our eyes that we may see. He restores your image in us, for we are His workmanship, created in Him unto good works, which you foreordained that we should walk in them.

"Our assurance today is that as our Creator and Creator Redeemer, your power is unfailing. Your arm is not too short to save. Though the earth and the heavens shake, you are the everlasting God, the Lord, who faints not – neither is weary – whose wisdom is beyond our understanding. You give power to the faint – strength to the weary – wisdom to those who humbly seek it.

"Wherefore, when we suffer in this broken world, if it should be of Providence or at our own hands, we will commit our souls to a faithful Creator, whose mercy is from everlasting to everlasting, whose justice cannot be overruled, and who shall ultimately make every wrong right on that final day when time shall be no more. 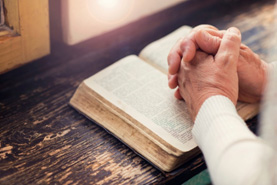 "Thus we abandon our idols. All things were made by the Son and for Him. Nothing has significance without Christ. We shall look to nothing or no one else as our hope of salvation for this life or the one to come. We bow only before Him.

"O Lord, make us brothers, with one Father, and one purpose as you intended from the beginning.

"This is our hope and confidence now and forever more.


"Every time we pray, our horizon is altered, our attitude to things is altered, not sometimes but every time, and the amazing thing is that we don't pray more," said Oswald Chambers.

These are indeed the times that try men's souls. So pray more.