April 4, 2016
The very concept of a free press was first introduced to the world in the Scriptures.

J. Lee Grady in Journalism and the Gospel contends that when Nathan, the prophet, stood before King David, pointing his finger at the ruler, declaring, "You are the man!" – He dramatically demonstrated that all men are accountable for their deeds. Nathan, says Grady, is an excellent example of the role of journalism. Its primary purpose is to expose darkness and remind rulers they are accountable to both God and their subjects.

Grady credits John Foxe as one of the first English-language journalists because he pointed his finger at the sins of the Catholic Church. Recording the abuses of priests and popes in Foxe's Book of Martyrs, Foxe provided what was certainly one of the first cases of eyewitness reporting.

Grady writes, "England was stubbornly resistant to the concept of freedom of the press. The British Crown suppressed all published dissent on the principle that this would secure peace and public safety. The Christian poet John Milton, however, made an early appeal for freedom of the press in his famous Aereopagitica, published in 1644. He summarized a truly Christian idea when he wrote:

"...though all the winds of doctrine were let loose to play upon the earth, so truth is in the field, we do injuriously by licensing and prohibiting to misdoubt her strength. Let her [truth] and falsehood grapple; whoever knew truth put to the worse, in a free and open encounter?"

The founders of our nation believed a free press was necessary to maintaining liberty. That's why they gave us the First Amendment, which reads: "Congress shall make no law...abridging the freedom of speech, or the press."

But what happens when news reporting becomes driven by prejudice, partiality, predisposition, preconception, and preference? I suggest it becomes nothing more than a rotten talebearer.

Leviticus 19:16 instructs, "Thou shalt not go up and down as a talebearer among thy people." A talebearer is someone who presents a story or an account without all the facts – someone who shares a one-sided narrative.

There has never been a more glaring example of talebearing than the recent reporting by both national and state media concerning North Carolina's passage of HB 2 – a simple common sense measure that overturned a dangerous Charlotte ordinance. The ordinance was an unconstitutional overreach by the City that would have allowed men into women's restrooms, showers, and locker rooms, creating a loophole for sexual predators to exploit. The measure would have also forced private businesses and churches into promoting ideas and participating in events that conflict with their peacefully expressed beliefs.

Yet the unscrupulous story line in nearly every story was something about HB 2 being an outrageous "Anti-LGBT" bill that discriminates.

The Governor has been unjustly hammered for signing the bill. Leftist reporting has generated a firestorm of opposition allied with big corporations, Hollywood figures, major sports organizations, and political demagoguery. The fact of the matter, however, is the press on the bill has been patently false – talebearers running up and down among the people.

To address the many misrepresentations, North Carolina Governor, Pat McCrory, released a document that addressed eighteen erroneous allegations against the measure – eighteen! The Governor and Lieutenant Governor, Dan Forest, as well as Rep. Dan Bishop, the bill's primary sponsor, have marvelously defended HB 2. But the lies linger while the talebearers eagerly look to stoke the fires at the first chance they get.

There is an old story about a parishioner, heavy with guilt, who shared with his priest about the unprincipled way he had spoken of his neighbor. He asked the priest what harm was done exactly. The priest took a feather pillow and a knife and gave them to the parishioner. He instructed him to hold the pillow outside a window and slash it open. As he did, the wind caught the feathers and spread them far and near. The priest then instructed the parishioner to retrieve each and every feather that escaped the pillow.

Like feathers strewn by the wind that can never be retrieved, so is the work of the talebearers. 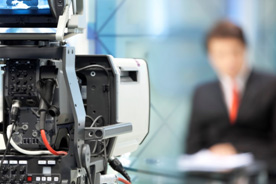 Nevertheless, there is a word of hope here. I think it's providential, even a veiled message for the Governor and North Carolina legislators that the media attack concerning HB 2 occurred during the same week as Easter.

Christ was the personification of truth. Though the truth was misrepresented, suppressed and buried away in a grave, it rose again to stand.

No matter how often the truth is beaten down, it always rises again. If the Governor and state lawmakers stay the course, the truth will ultimately prevail. That's not just wishful thinking; it is one of the great lessons of the resurrection.

A talebearing press should beware. A free press should indeed expose darkness and hold leaders accountable, but not tell damnable lies about them.