August 27, 2017
Following close on the heels of the mayhem in Charlottesville, Virginia, upheavals over statues associated with the Confederacy in North Carolina have taken center-stage.

Earlier this month, a group of protesters gathered outside of the Old Durham Courthouse and toppled a 15-foot monument dedicated to "the boys who wore the gray."

Shortly thereafter, vandals struck the statue of Confederate General Robert E. Lee near the entrance of Duke Chapel, which prompted the administration at Duke University to remove it.

"Silent Sam," a statue located on the North Campus at the University of North Carolina has been a place of intense protests by those demanding that the statue be removed.

Governor Roy Cooper has said Confederate statues in North Carolina should be taken down. He wants the state's lawmakers to repeal a 2015 law that says none of these monuments belonging to the state may be taken down without the approval of the legislature and the North Carolina Historical Commission.

Of course, at the crux of this conflict, is the claim that such monuments perpetuate racism.

But wait a minute, is it really that simple?

Abraham Lincoln said in his fourth debate with Stephen Douglas:

Though abolitionists largely voted for Lincoln to become President, they struggled to some degree because they knew him not to be a candidate in favor of full equality. Black abolitionist and Illinoisan, Hezekiah Ford Douglas said of Lincoln, "I do not believe in the anti-slavery of Abraham Lincoln. He is on the side of this Slave Power of which I am speaking, that has possession of the Federal Government.... I went through the State of Illinois for the purpose of getting signers to a petition, asking the Legislature to repeal the Testimony Law, so as to permit colored men to testify against white men. I went to prominent Republicans, and among others to Abraham Lincoln and Lyman Trumbull, and neither of them dared to sign that petition to give me the right to testify in a court of justice! If we sent our children to school, Abraham Lincoln would kick them out, in the name of Republicanism and anti-slavery!...I care nothing about that anti-slavery which wants to make the Territories free, while it is unwilling to extend to me, as a man, in the free states, all the rights of a man."

As President, Lincoln supported the colonization and deportation of blacks, even after the Emancipation Proclamation. He pressed the possibilities of settling them in places such as the British Honduras.

Lincoln may have been the "Great Emancipator," but he was no paragon of anti-racism.

Neither was Ulysses S. Grant, leader of the Union Army, who allegedly said, "If I thought this war was to abolish slavery, I would resign my commission and offer my sword to the other side." The quote is in dispute and said to have been conjured up by Grant's opponents. But in a letter to Elihu Washburne, a congressman from Illinois who served during the Civil War, Grant clearly demonstrated his views were similar to Lincoln's, saying, "I never was an abolitionist, not even what could be called anti-slavery, but I try to judge fairly and honestly and it became patent in my mind early in the rebellion that the North and South could never live at peace with each other except as one nation, and that without slavery."

Grant was hardly descriptive of a hard-liner against a racist point of view. In contrast, General Robert E. Lee said that he was opposed to the institution of slavery but sided with the Confederacy because he couldn't bear the sword against his native Virginia.

Lincoln, Grant, and Lee opposed slavery. Still, all three were willing to sacrifice the dignity of their fellow man with full equality for political reasons. So, with respect to racism, how are Lincoln and Grant so much morally better than Lee?

Shall we, therefore, throw down the busts and statues in honor of both Lincoln and Grant?

James McPherson, in his 1997 book, For Cause and Comrades: Why Men Fought in the Civil War researched numerous primary sources to determine the reason soldiers from both sides of the war fought. Thomas E. Woods Jr., a Harvard Alumnus, and American historian noted that in two-thirds of McPherson's sources, he found patriotism was their purpose.

Union soldiers wanted to preserve the vision of the Union as bequeathed to them by the Founders, more specifically, liberty for all men. Confederates saw their struggle against the Federal government much like the colonists who fought against Great Britain. In their view, the Revolutionary War was an act of secession like their own, and, therefore, meant to preserve the right of self-government with its wide scope of implications. Both sides were struggling for core American values, one in which interpreters will say liberty advanced, but so did the prospect for an ever advancing federal tyranny.

No individual who has studied the Civil War can honestly say that it wasn't about slavery, but neither can one accurately argue that it was a war against racism. Racism in the North and the South stretched far beyond the War Between the States. Blacks continued to be locked into a rigid caste system of race etiquette that kept them down.

In fact, in All Eyes Are Upon Us: Race and Politics from Boston to Brooklyn, Jason Sokol eloquently states, "As the nation gazed at southern whites' resistance to the civil rights movement – at the Klansman and demagogues, attack dogs and cattle prods – many recoiled in horror. Northerners told themselves that such scenes emanated from a backward land, a dying region, a place apart. Yet rampant segregation in cities across the country rendered racial inequality a national trait more than a southern aberration. When black migrants streamed north during and after World War II, James Baldwin reflected, 'they do not escape Jim Crow: they merely encounter another, not-less-deadly variety.'"

The point is whether we are talking about Lee, Lincoln, the boys in gray or the boys in blue, they were, just as most people in every generation, products of their own times. This is not an excuse. It's just saying that blanket judgments rarely serve our history well. Moreover, paying tribute to historical figures should never be seen as an endorsement of their actions altogether.

We cannot extricate ourselves from our national sins by tearing down Confederate monuments. 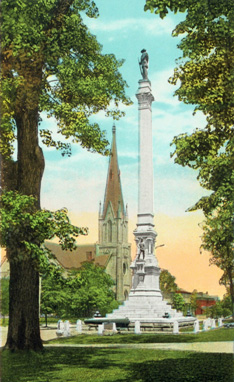 Although I cannot say Russel Moore, current president of the Ethics and Religious Liberty Commission would agree with the premise of this article, I agree with him, when he writes, "Yes, Lee fought for slavery, but so did the American Founders, in writing in allowances for it into the American Constitution. Does the picture of Thomas Jefferson I have in my study endorse his theological liberalism and his slave-holding or does it recognize his far sighted commitments to human dignity and religious liberty? Does the bust of Theodore Roosevelt endorse his Darwinism or his awful views on eugenics?"

Moore goes on the say that "[n]one of us is free from a sketchy background, and none of our backgrounds are wholly evil." He adds, "The gospel...frees us to give honor to whom honor is due (Rom. 13:7), without the pretense that any human being is without sin or dishonor."

The fight against racism should continue! Nevertheless, the perpetuation of racist views will not stop because we crucified our history between the two thieves of white supremacists and radical leftists.

Neither will it end, because we heeded the call of a Governor who capitalizes on current events for political gain, just as he did on HB 2 (the bathroom bill which sought to ban men from women's restrooms), in order to erroneously label his political opponents in the Republican Party, and elsewhere as bigots.

Racism will finally die when we believe and act on the basis of what the Scriptures teach – that every person is of "one blood" (Acts 17:26) and that Christ's blood was shed to redeem all persons from their sins.

Racism will finally die when we live out the simplest of Christian creeds: