Rev. Mark H. Creech
In a whale of a mess 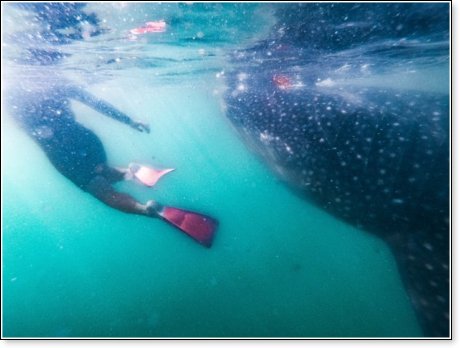 Last month, Rainer Schimpf, 51, was snorkeling off the coast of Port Elizabeth, South Africa. As a dive operator, he was observing and documenting a sardine run, when suddenly he found himself in the path of a Bryde's Whale. The whale grabbed him with his mouth and scarfed him up head first.

Schimpf said it was "kind of an instant relief" to realize that he was too big for the whale to eat whole. "So my next thought," he told Sky News, "was that the whale may take me down into the ocean and release me further down, so I instantly held my breath. Obviously he realized I was not what he wanted to eat so he spat me out again."

The story almost sounds like fake news, but it really happened.

Some church leaders respond to a similar account found in the Bible with doubt and unbelief – the story of Jonah. Nevertheless, the story is historical. It actually happened.

Jonah, the Bible says, was going to Tarshish on a ship, which was sailing in the opposite direction of Ninevah, the place God had instructed him to go and preach a message of repentance. God overruled Jonah's disobedience by making a great storm to arise. To save the ship, the sailors cast Jonah out and into the sea. If that wasn't bad enough, Jonah was then swallowed by a great fish, presumably a whale, only to later be spit out on the shore near Nineveh, where he was supposed to deliver God's message. Jonah would then obey God's call, and the city was saved from God's judgment.

Two preachers, a theological conservative and a theological liberal, were arguing about this account in Scripture. "Do you mean to tell me that you really believe that story about Jonah being swallowed by a whale?" the liberal preacher asked the other.

"I sure do," answered the conservative minister. "And when I get to heaven I'm going to ask Jonah about that."

"And what if Jonah is not in heaven?" asked the liberal pastor. The conservative theologian thought for a minute and responded, "Then you can ask him."

This jest was not meant as an insult. Nor was it meant to imply that everyone who doesn't believe in a literal account of Jonah will be barred from heaven. Nevertheless, it must be said that taking an approach to Scripture that denies its inerrancy or infallibility will result in the most undesirable of spiritual and moral consequences.

The late Harold Lindsell, in his classic book, The Battle for the Bible, warned about this more than 40 years ago. He wrote:

"No matter how sincere a man may be, and however carefully he guards against further theological concessions, they are inevitable once inerrancy is given up. Francis Schaeffer [renowned evangelical theologian and philosopher] told conferees at L'Abri that 'the generation of those who first give up biblical inerrancy may have a warm evangelical background and real personal relationships with Jesus Christ so that they can 'live theologically' on the basis of their limited-inerrancy viewpoint. But what happens when the next generation tries to build on that foundation?' I am saying that whether it takes five or fifty years any denomination or parachurch group that forsakes inerrancy will end up shipwrecked. It is impossible to prevent the surrender of other doctrinal teachings of the Word of God when inerrancy is gone."

Progressive mainline churches gave up on the inerrancy of the Bible decades ago, and the outcome has been horrific for Christian orthodoxy. Today, it can be seen in many of their most erroneous views about God and his sovereignty, Jesus and the purpose for which he came, evolution, abortion, human sexuality, gender, social justice, wealth redistribution, income equality, and socialistic principles.

Moreover, forsaking belief in the full authority of the Bible has had a devastating effect on the nation's faith in general. Two years ago, Gallup did a poll that showed fewer than one in four Americans (25%) now hold that the Bible is "the actual Word of God, and is to be taken literally, word for word." Approximately 26% view the Bible as a "book of fables, legends, history and moral precepts recorded by man." Gallup said this was the first time in their "four-decade trend that biblical literalism has not surpassed biblical skepticism." It's only logical that if the church demonstrates a lack of faith in God's Word, the world will out-pace it in following suit.

Gallup went on to conclude:

"Americans in all age groups still largely accept the Bible as a holy document, but most of these downplay God's direct role in it. That could mean people are more willing than in the past to believe it is open to interpretation – if man, not God, wrote the Bible, more can be questioned. And that, in turn, may have consequences for where Americans come down on a number of morally tinged issues. The country may already be seeing this in growing public acceptance of a variety of behaviors that were once largely frowned on from a Christian perspective – ranging from gay marriage and premarital sex to out-of-wedlock births and physician-assisted suicide."

If the inspiration of the Scriptures does not pertain to the totality of its content, then it means something outside of the Bible ultimately becomes its Judge – a non-inspired source becomes the authority of an inspired one. Life, and its many issues are no longer measured by a sure and trusted plumb line, but by one not necessarily any more authoritative than another. Thus, there is no absolute truth. Everything simply becomes a matter of conflicting value systems endlessly seeking to prevail over each other – a recipe not for freedom, truth, justice, love, peace, and tolerance but endless chaos, confusion, and calamities.

And unfortunately, that leaves us in a whale of a mess.