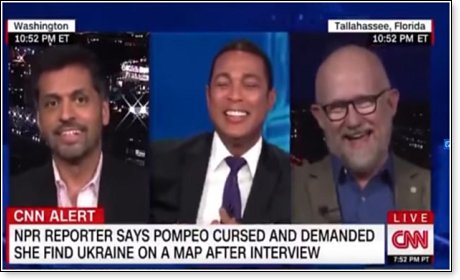 Recently, I attended a worship service in a small rural church in North Carolina with a segment of our country's citizens, who, by the standards of many today, would be deemed as rednecks, uneducated buffoons, bigots, and deplorables. Because of their support for President Trump and other alleged faults, they would unquestionably be thrown into that same broader category of people CNN's Don Lemon, Rick Wilson, Wajahat Ali laughed to scorn on Lemon's television show.

But let me describe to you what contrasts these people from the elitists who think of them as a joke. They may not have several degrees behind their names. They might not know where Ukraine is located on a map. Still, they possess a depth of wisdom that makes the elitists look shallow and foolish.

Generally, they discern well between the truth and a lie, good and evil. They trust every word of the Bible to be fully inspired by God – the definitive source for measuring every truth claim. They take the Bible literally, wherever it's clear it should be taken literally. They believe its principles are sufficient for providing direction in the great questions of life, ethics and morality, personal and corporate.

They reject man-made utopian visions of the world. They believe Jesus is the Savior – there are no more Messiahs, whether perceived in men or systems of government.

Yet they are earnest patriots and law-abiding citizens. They participate in their government. They love the flag and would die for their country, even though they know it's currently on a trajectory that marginalizes them and could result in its national implosion.

They believe God made humanity in the dual fixed sexes of male and female, and their gender roles are quite different, equal in importance and complimentary.

Although they struggle in some of the same ways all families struggle, they are committed to the preservation of traditional family life. They believe a husband and wife (one man and one woman), who in marriage love and cherish each other for a lifetime and rear their children in eternal verities, is what constitutes God's plan for the home. They believe children, whether born or unborn, are God's greatest gift.

They believe in heaven and hell and know that unless one seeks the forgiveness of their personal sins by faith in Christ alone; unless one is born of the Spirit of God, and changed from within to obey God and love his ways; one cannot enter the kingdom of heaven. Their rock-solid confidence in these assertions are borne not only out of their faith in the clear teachings of the Holy Scriptures, but also their own experience, which includes the witness of assurance God's Spirit gives to their own spirits. Their faith is not merely a leap in the dark or a subjective feeling, but is based in the vast preponderance of the evidence that Christ's claims to be the Son of God are authentic.

They long for God to be as gracious and merciful to others, as he has been to them. They earnestly pray for those who despise what is acceptable and good, but justifiably discriminate accordingly. They are determined not to hate anyone, not even their enemies. Nevertheless, they do derive a modicum of pleasure in knowing God is a God of judgment and will, in his way and time, make every wrong right, ultimately cleansing the earth of those who persist in dishonoring his holy name and order. They garner strength in the promise that at the Day of Judgment, righteousness will be exalted, wickedness forever put down, and the faithful abundantly rewarded.

There is so much more about these people worthy of admiration and not ridicule. As ambassadors for Christ, they are the salt that preserves and saves from corruption, and the light that leads out of the darkest dungeons of moral degeneracy to liberty. They represent a value system, which at one time was pervasive in America, until the elitists persuaded much of the country to abandon it.

How's that working out? It's a disaster.

They are that band of brothers whom the apostle Paul said God called unto himself, saying:

I love these people. Furthermore, I'm proud to be named among them. They are Christians. They are, more specifically, conservative evangelicals. They reside not solely in rural areas, but urban and metropolitan areas too. In fact, they are everywhere because God has chosen them as his own people, and strategically positioned them for his redemptive purposes.

They are not without feet of clay. That's why they claim a Savior, the Lord Jesus Christ. Nevertheless, they possess something far more significant than any form of worldly affirmation and acceptance. They have a personal relationship with God that characteristically bends them toward virtue – that empowers them to live out the incomparable creed of their Master to love God supremely, to love their neighbor as themselves, and to do the good unto others that they would have done unto them (Mark 12:30-31; Matthew 7:12). They speak to God in prayer regularly, and he communes with them. Moreover, for those with eyes willing to see it, God reveals himself through them, over and again.

These people, too often belittled, sometimes disparaged as the underlings of society are nothing to be laughed at or scoffed. As the Scriptures say, "Wisdom is justified by her children" (Matthew 11:19).