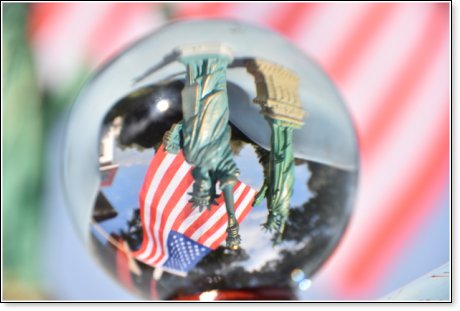 I realize that the election isnt over, but it isnt looking good for President Trump. Let me say something about that. Despite all of the investigations of more than fifty years, which included the Warren Commission Report, the recent release of public documents never originally provided to the public, and dozens of other private probes, none ever demonstrated clearly that there was a conspiracy to kill President John F. Kennedy. Yet, most Americans believe that Lee Harvey Oswald did not act alone.

Many Americans doubt that coups can happen in this country, but we are just as vulnerable as other countries to such nefarious intents. If a Presidents life can be snuffed out and no one can seem to get to the bottom of such a heinous crime for more than five decades, why is it too far-fetched to believe a Presidential election can be stolen? Of course, it can.

Trumps legal team may indeed have overwhelming evidence of widespread voter fraud  enough to have changed the election's outcome. But even so, justice is only as good as the character of the judges or the legislative bodies that look at the alleged evidence. Whatever the case, our nations future obviously hangs over the pit of hell by something as thin as a spiders web.

He rules the nations by his providential actions. He raises up kings and rulers, good or bad, by whatever means he chooses to accomplish his purposes in the earth. He does not ask our permission, nor does he seek our counsel.

Sometimes our political circumstances, if seemingly disappointing or tragic, are his blessings in disguise. At other times, he sends judgment. Nevertheless, he is righteous and perfect in all his ways. He does not owe us an explanation any more than the one he gave to his suffering servant Job: Will the one who contends with the Almighty correct him? Let him who accuses God answer him! (Job 40:2). Who has the wisdom to contend with or answer an omnipotent, omniscient, omnipresent God?

Let me tell you what I think every one of us must do  something imperative and urgent. Make sure your life is right with God through his Son, Jesus Christ. Gods truth is marching on. His ways will not fail. There is a heaven and a hell. Christ will return one day, and only those who have believed in him will share in the forever kingdom he promises to establish.

This is not merely pie in the sky. This is the trajectory of all history  the coming and return of the Messiah. Thats what the word history actually means. Its his-story. Each day we are moving closer to that great day when his plan of salvation for the world is completed.

In the mean-time, as a Christian, I believe in my country, and I earnestly intend to work and pray for its peace. Still, I qualify this statement with an additional prayer that God will give me, as well as all of his people, grace to always stand boldly for whats right, never compromising with evil, even for the sake of peace.

The corruption in our government today is indicative of the rottenness of our own souls  proof of our sinful condition as a culture.

Joseph de Maistre, the Savoyard lawyer, and philosopher argued that Christianity's rejection was directly responsible for the disorder and bloodshed that followed the French Revolution. He once wisely said: Every nation gets the government it deserves.

Perhaps its not too late for our nation to turn back to God. Christian, what are you willing to do to help your beloved country find its way back home?

You can make a secure donation to the League via this link:

To send your donation by mail: