January 27, 2015
Encouraged by the Democrat Media complex to write his own narrative, President Obama has apparently decided to deliver it in the form of a comic book supervillain monologue. 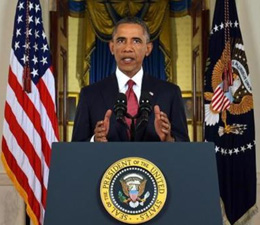 Obama's "swagger" has led us beyond the realm of "laughingstock" status and straight into comic book adventure territory. The classic elements are there: the villain with his faithful yet bumbling sidekicks, his plan to "transform" the world, monologues where he lectures and justifies. The superhero, however, has yet to make his entrance.

In this series, the Democrat Media complex edits the script, and try as they might to cast Obama as the superhero, his mask is slipping. Joseph Curl, in his recent column titled "Be afraid: this is the real Obama," wrote: "We all knew that an unrestrained Obama would be dangerous, but we never thought he'd be this dangerous...and he's just getting started. Scary, isn't it?"

Apparently, even some in the media have begun to notice the resemblance to comic book villainy. That might explain this photograph of Obama with "horns" (instead of the usual halo) from his September 2014 speech, reprinted across several major publications. Click on the linked video at the NY Times or other pictures taken at the same time and spot, and note the unusual editing.

It's not difficult to imagine the comic-book version of Obama's presidency:

A secluded tower with an Oval Office, its desk equipped with the most powerful pen and phone in the world. The Constitution lying crumpled in the wastebasket alongside the blindfold of Lady Justice, who's tied up in the corner and force-fed lectures on empathy. An army of agencies with miles of red tape at the ready. Loyal sidekicks standing at attention, as our villain stands tall in a rotating bully pulpit that he aims toward his target of the moment.

His chin is raised and brow tortured with every "I" and "me" uttered. He tells stories of victims he must save. He inspires with descriptions of a newly transformed world, while sparing his audience the dirty details of his plan – the laws that must be broken, the cronies who will gain, and the "who" and the "what" that must be destroyed in the process.

His preferred weapons: speeches, memoranda, and veto pens. With them, he blasts open holes in the nation's borders. Wrecks its health care system. Puts the economy teetering at a precipice. Destroys bipartisan legislation. Releases captured terrorists while aiming kill drones at others. Energizes brutal regimes. Disses allies. Mocks and belittles his opposition. Organizes citizens and stirs them to riot in the streets.

And with a flick of his "uber-presidential" cape in a grand exit worthy of the best comedic villains, he is off – to another fundraiser. Or golf game. Or luxurious vacation. Or interviews with the "pimp with a limp" and a woman wearing green lipstick.

In movie versions of superhero comics, the villain's monologue is often the most memorable part, where he lectures "on honor, ethics, and why he's better than the hero." And unless a sequel has been advertised, it also marks the point at which the audience may truly wonder who will prevail.

With that monologue, the supervillain is completely unmasked and his agenda revealed.

Obama, as Townhall's Guy Benson recently noted, "molded his message to...disguise his core character...and has proceeded to allow the mask to slip further and further as his presidency wears on," leading up to his "defiant" posture at the 2015 SOTU address.

It was during that address that the "defiant" Obama's mask fell, at the precise moment – mere seconds after he was offering to reach across the aisle – when he wolfishly smiled like the best of the baddest of the baddies during their movie monologues and obviously off-teleprompter, growled: "I know, because I won both my elections."

The transformation was complete: The address was no longer presidential. Superhero became Supervillain. It was part of the bad guy monologue. The stuff of comic books. Only it was real.

"America was warned, early on," wrote Michael Walsh, "that beneath the smiling facade of Barack Hussein Obama was a very angry man." Walsh described the upcoming years of this presidency as the "inflection point" – where no one can stop Obama as he leads us "straight down, to realms never before charted in the American experiment."

Obama also leads our debt projections, described by Mark Steyn back in 2012, along "a straight line going straight up before disappearing off the top right-hand corner of the graph in the year 2084 and continuing northeast straight through your eye socket, [and] out the back of your skull."

Just as comic book villains would justify their actions, Obama had no choice but to take us there. He couldn't wait. "We can't wait." He is the One we've been waiting for. He has dreams from his father to fulfill. A nation to organize. Health and wealth to redistribute. The environment to protect. Justice to redefine. A government to transform. A legacy to write.

Obama is, as Jonah Goldberg noted, "merely hastening the inevitable, doing what History requires of him." He must remake America, because he knows best "who we are" and has identified and targeted the "who we are not."

And now, since Congress won't "pass a bill" on immigration, authorize the right treaty, or bring other legislation to his liking to his desk, he must go solo. Obama works as a "loner," insulated from reality – but still he believes in himself. He has a "gift." And he is after all, the "smartest guy in the room."

Like another fictional baddie who admitted to being "the smartest man in the world," he would bristle at the thought of being labeled "a comic book villain." Neither is he a "crook." No – he "hears" the silent non-voter who needs him. And above all, he cares.

About the law, though – not so much. As Victor Davis Hanson observed, "For this administration, the law is a drag....[Obama] not only does not tell the truth, but also seems to be saying to the public, 'I say whatever I want, so get over it.'"

Other supervillains would be envious. Instead of living in obscurity, Obama won popular elections twice, with the media complex at his beck and call. He is protected by its force field, reinforced by the race card. Congressional threats and lawsuits bounce off; talk of impeachment fizzles away when it nears his protective bubble.

Obama harbors far grander plans than to spend the last two years of his term as a lame duck, and the usual presidential work is much too boring. Visions worthy of a comic book character of super proportions invade Obama's mind and direct his ambition – he's after a legacy.

The author of the book The Forgotten Presidents encouraged President Obama to "take his image back from his critics and define his legacy." But Prof. Gerhardt needn't worry that Obama will be forgotten. Like the best of comic book villains, how could he be – for who could forget the president who culminated the transformation from constitutional republic to tyranny?

"It's not every day," noted Roger Kimball, "that you get to have a ringside seat at the birth of despotism. The entertainment value is likely to be quite high, though I predict the story will not have a happy ending."

That is, unless a superhero flies in to save the day. Congress doesn't appear to be up for the job, the current slate of 2016 GOP candidates leaves room for doubt, and the media complex still runs the show.

But perhaps in his quest not to be forgotten, Obama will have energized the Forgotten Man – described perfectly in 1883 by William Graham Sumner – the "very life and substance of society." "He works, he votes, generally he prays – but he always pays[.]" The independent, patriotic producer, the one who values and thrives in liberty, not "one over whom sentimental economists and statesmen can parade their fine sentiments ...Therefore, he is forgotten. All the burdens fall on him[.]"

Our superhero, still working behind the scenes, is the Forgotten Man. He needs a leader to faithfully represent him in Washington. And hopefully he (or she) will step into the spotlight before the bad guy monologue is over.