Tom DeWeese
The first step in liquidating a culture... ERASE its memory

September 25, 2016
What happens when the forces of evil gain power and the necessary technology to destroy an entire culture for their own means? That is the story of my new political thriller entitled ERASE. 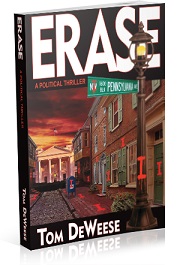 ERASE is set in today's America. Every government policy I use in the story already exists in our system. Much of the dialog I have given to my characters was said by real policy makers. Many of the scenes in the book really happened. And many of my characters are based on people you may recognize. In my pages they are forced to clearly express their true intentions. It's not sugar coated!

As Jay Lehr of the Heartland Institute said of ERASE: "The book has all the ingredients of a mystery thriller including murder, mayhem and intrigue, villains, heroes and heroines – but all placed in a framework of today's reality only slightly exaggerated for impact."

If you are one of the real heroes out there on the front lines fighting to preserve our freedom then you have faced many of the same evil forces; the same outrageous regulations; the same dire consequences as do my book's heroes like teacher Brad Jackson; pastor Dave Delray; businessman John Lloyd; and activist Mack Richards. Together they represent the four pillars necessary to preserve our precious Constitution, including: Education, Free Enterprise, Christianity and Political Action.

Like today's desperate patriots, they are in a race against time to save our precious liberties before it's too late. To the true heroes in our nation, the folks who attend the council meetings and the school board meetings; those who swallow hard and then speak out against dangerous policies; and who return again and again – I dedicated this book – ERASE. My goal was to give every American the ability to see the whole picture and the hope needed to keep fighting.

The reviews are starting to come in and I am humbled as several of the comments and reviews have compared my book to the likes of Ayn Rand's Atlas Shrugged and George Orwell's 1984.

Here are a few of the reviews and comments I have already received about ERASE:

"I think ERASE maybe the most important political novel since 1984, Atlas Shrugged, Brave New World and State of Fear."

Like Atlas Shrugged and the Left Behind series Tom DeWeese's ERASE presents a fictional path through a dystopian future. However, in ERASE every single policy presented in the book, from the use of technology to change our culture; to the use of the public school classrooms to eliminate true knowledge; to the destruction of Christianity in a drive to meld all religions into one powerful tool for government, is all true and happening at this very moment.

Here's what other readers have said:

"I am reading Tom DeWeese's new novel ERASE which has all the flavor of the late Michael Crichton's State Of Fear and Rand's Atlas Shrugged."

"DeWeese ties the Global Agenda into a fictional, fast moving, interesting story that would make anyone understand what is happening to our Country, even if they'd not been paying attention for the past 20 to 30 years. This will be a best seller shortly."

"Murder, greed, tyranny, Agenda 21, and New World Order, all tied up in a package of deceit ... and lying at the front door of the White House. You are going to love this one."

"It is eye opening, it is necessary, it is suspenseful, it is just well written. The characters are faced with the same fears, the same trying to stop it, the same helplessness that many of us are facing daily as we fight to stop such a dark demon from destroying our real lives."

"I think the author did an excellent job in tying in all aspects of the world we live in today. Everyone should read it. It is in story form for the benefit of those who can not wrap their minds around the world today. Factfiction I guess you would call it."

"ERASE gives me hope, that everything wrong will be corrected, that good triumphs over evil."

"Erase is so incredibly believable; I guess that is because most of the things in it really happened or are happening now in America. It is so good to have it in a novel."

"You are a terrific writer. It really flows..."

"It is eye opening, it is necessary, it is suspenseful, it is just well written."

"I highly recommend the book, both as an excellent suspense novel and maybe one that will open some eyes to a real threat."

"We finished Erase. WOW!! We really enjoyed it!"

"I finished your book and it really had me thinking, that's the point right!"

"I am also enjoying your book."

"Exciting read! Each chapter makes you look forward to the next. Relevant to today's America."

My book ERASE is a vital new tool to help average Americans understand the imminent dangers now threatening the freedoms we have all taken for granted. Through a fictionalized story ERASE shows everyone the root of those dangers and lets them clearly see what will happen to our society if we don't take action to preserve our American culture against those who seek to destroy it.

As Harold, the ERASE Graffiti Bandit said, ""Check Your Premise... all is not as it seems!"