This past Saturday I braved the airlines, suffered through the mandatory mask-wearing, and flew to Coeur dAlene, Idaho to speak to the Restore America rally, along with Ammon Bundy, State Rep. Matt Shea and many others.

This is the growing spirit of the renewed freedom movement! 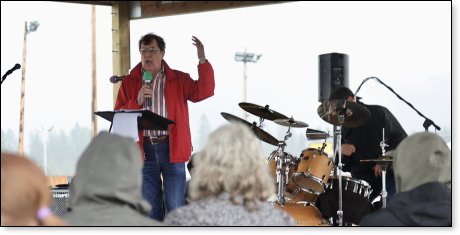 I told them how the Left is using the pandemics fear tactics to move forward with plans to enforce the Green New Deal and change our very system of government.

And I told them how vital it was to learn to organize with fellowfree thinking neighbors to build our cause and fight back on the local level.

Make your own community a Freedom Pod, where private property is protected and preserved, free enterprise protects and grows the economy, and you have the freedom to choose your own personal life dream!

That is a Freedom Pod. Do it in your community and it will spread to the next, and the next.

But, I said, Im very concerned about the lack of leadership from the Republican Party, on the local to the national levels. We have all the ammunition we need to run effective attack ads to reveal the truth to the American electorate. I said there should be a determined plan underway to secure our ballot boxes. And there should be challenges to every leftist incumbent in every race. We have never had more ammunition to win at every level!

But none of that is happening!

And that is why we need to organize ourselves at the local level and fight!

I told the enthusiastic crowd, too many are just sitting back, waiting for Donald Trump to win. But, if he doesnt have the support of city councils, mayors, state legislatures, governors, and of course, both Houses of Congress, then he wont make it through his next inaugural address before hes thrown out of office!

This is what the American Policy Center is fully focused on  leading the training effort to help win those vital elections and roll back these threats to our Republic.

I concluded, saying, The enemy has revealed itself  right there in front of us. You know what you have to do! Prepare to plant Freedom Pods in your city and CHARGE!

The American Policy Center is prepared to help lead that charge!