Tom DeWeese
Can we drain the Swamp or not???

President Trump has been trying  but he seems to get blocked at every step  too many times by his own administration.

Weve been waiting more than a year for the report from the much-touted investigation by U.S. Attorney John Durham.

Its supposed to be explosive.

Its supposed to be the report that would finally drop the boom on Comey, Hillary, and Obama  and all of their criminal cohorts!

This is supposed to be the revelation of the most criminal conspiracy in U.S. history  the coup to destroy Donald Trumps presidency.

This is the investigation that was going to bring down the whole Deep State and put us back on track to finally end the Washington, D.C. corruption machine and restore the Republic.

But we are just weeks away from the most important election in U.S. history  and what have we heard from the Durham investigation? 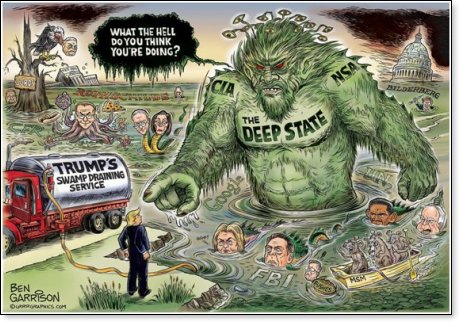 There is no grand jury in place to hear the facts.

There is no line-up of witnesses.

There are no defendant lawyers rushing to the news media yelling about a trumped-up witch hunt against their clients!

Are Attorney General Bob Barr and U.S. Attorney Durham playing us for fools?

If they think they can wait until after the election to finally do something  then THEY are the fools!

The Deep State will remain in power and will gleefully spit out Donald Trump and all of his supporters without mercy!

Im personally sick and tired of waiting as those who have been trusted to take action once again twiddle their thumbs while our precious nation is destroyed.

Are you tired of it too?

If so, will you join me in an emergency call to action to demand that Barr and Durham take immediate action to at least start a public process to take down these criminals  now  before the election?!

Do it now  so their criminal activity becomes headline news and exposes them! This would change the debate for this election and put the whole focus on their crimes!

Please sign the urgent on-line petition to Attorney General Barr to demand that his Department of Justice take immediate action NOW  BEFORE THE ELECTION!!

Its urgent that we build this campaign into a nationwide issue. We need to generate thousands of petitions to Attorney General Barr to build pressure on him to act now.

To do that I need immediate funds. Please help me with your most generous gift to APC to lead this emergency effort.

I am sick of this inaction as the swamp ignores us! Lets put someone in jail  Now!!

SEND YOUR MESSAGE TO AG BARR

January 7, 2021
Immigration and Chinas threat to our sovereignty

December 30, 2020
The globalist left has plans for you

December 12, 2020
Join me for a very special online presentation