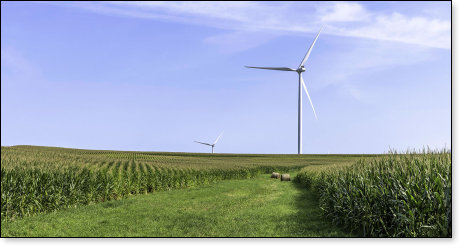 Today, the same forces behind the wind and solar scheme are pushing the "carbon capture pipeline." The most important food-producing farmland in the nation is about to be confiscated – all under the insane lie of environmental protection.

But here are some scientific facts that you won’t hear from these so-called science experts. Scientists, including Dr. Lee Merritt, an Iowa-based CO2 expert, reports that the earth is actually suffering from a CO2 shortage. The earth needs an average of 1,600 parts per million (PPM) of CO2 in the atmosphere to support us. Currently, we reportedly have 410 PPM. In other words, nature is facing CO2 starvation. Plants – including those we need to feed us — won’t be able to grow sufficiently.

In addition, the massive deployment of wind and solar farms over thousands of acres may well create the beginnings of a new dust bowl that will destroy even more farmland.

And there is this shocking news. Carbon capture pipelines have now been proven to be major health hazards to people living close to them. A carbon capture pipeline in Mississippi ruptured near the small town of Satartia. A green cloud descended over the town, blocking oxygen, and creating a foul smell. Dozens of people became disoriented, nauseated, and dazed. Many collapsed in their homes. Even car engines shut off, because they also need oxygen to run. Months later, some people are still reporting mental fogginess. And first responders had no idea how to deal with it.

But the drive is on to build more of these dangerous, useless, and totally unnecessary carbon capture pipelines. Private companies like Summit Carbon Solutions and Navigator Co2 Ventures have no real reason to build them except that there is money in the Biden Infrastructure bill offering big bucks.

Opposition across Iowa and other affected states is strong. Public meetings designed to sell the idea are filled with citizens and property owners who stand opposed to the scheme. Many county supervisor boards have written letters to the Iowa Utilities Board (IUB) to express opposition. However, their commitment to a plan to stop it is weak. Some county officials have already surrendered to this tyranny, saying, “There’s not much we can do. It looks like it’s just going to happen.” One newspaper reported that “local governments have no legal power to stop carbon dioxide pipelines.” They are wrong!

And that’s why I went to Iowa and barnstormed the state. The good news is that no land has yet been taken. It’s still in the planning stage. I provided a series of plans on how citizens can organize and make this a very public issue. They don’t have to just accept it! Plus, I gave the elected officials a full game plan for fighting this in local and state government.

First, citizens and their elected representatives must understand that these companies behind the pipeline are private companies They don’t have the power to enforce eminent domain. They must have government force behind them. That’s why they are looking to the Iowa Utilities Board as their ace to give the power to take the land. I have a plan to stop that.

As I spoke directly to county supervisors, I didn’t pull any punches. Frankly, I was appalled that most of the county boards across the state have taken such a weak stand against the pipeline.

One county board had written a letter to the Iowa Utilities Board, pleading with them to not use the power of eminent domain. The letter ended by saying “…we respectfully ask that you refrain from utilizing eminent domain in your pursuits.”

I read that line to them in my public meeting and then shouted, “This is how you represent your people? By pleading? Shameful!"

I said, “YOU ARE THE BODY DIRECTLY ELECTED BY THE PEOPLE TO PROTECT THEIR RIGHTS…YOU MUST TAKE DIRECT ACTION TO DO THAT!”

I then outlined a plan to win. First, stop taking the coward’s way out by hiding behind an unelected, appointed board that doesn’t represent the people.

Second, I told them to prepare solid legislation that will protect the property rights of those in the path of the pipeline. Then, I gave them several examples to choose from. I told them, “Declare your county protected from the pipeline.”

Third, I told them to now reach out to other county boards. Encourage them to take the same action in their county. Then, every county that takes the action must lock arms together and stand firm. In that way, they will create an impenetrable wall around their county and the state that these private companies and appointed boards cannot pierce.

One more piece to the puzzle will assure victory. If they have strong Constitutional Sheriffs that will enforce that property rights legislation and arrest any representatives of these private companies that come onto private land to map it and pressure the landowners, that threat will end.

To assure these tactics are used, dedicated local citizens must demand that their elected representatives act. Then the citizens must organize to support them. Working together in that way, community by community, will result in these outrageous carbon capture pipelines never being built!

I must tell you, the response from my audiences was powerful. As I write this, they are now working to build the effective organization I called for. The citizens must do the work to convince their county board of supervisors to take these actions. I am now getting reports from the leaders I’ve been working with that this is starting to happen. Opposition is building.

In fact, after I returned home from the trip, I was thrilled to receive a report that two counties in South Dakota (Brown and Spink) have just passed moratoriums blocking any permits or construction on the pipeline!

This is what we can accomplish when we take a strong stand and refuse to buckle under.