December 15, 2008
There is often a profound difference between morality and legality, and, if this were a just world, a good percentage of the American left would be tried for treason. If that seems a radical statement, I ask you: What price should be paid for sowing the seeds of your nation's destruction? What should be the punishment for creating millions of people so ignorant, so effete, so corrupted in judgment that they are unable to sustain a free republic, resist enemies foreign and domestic, and perpetuate their culture? I'll leave that to you to decide and just talk a bit about the state of the electorate. 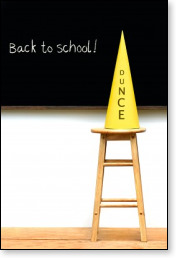 I have often written about the ignorance that has resulted from decades of pathetic, dumbed-down parenting and schooling, and, sadly, there's no shortage of material on this subject. In fact, you could probably read three large volumes on it and not know all Americans don't know about what they should know. However, one short article recently written by economics professor and columnist Dr. Walter Williams perhaps tells us all we need to know. It is called "Ignorance reigns supreme" and relates the findings of a national survey measuring people's knowledge of civics titled "Our Fading Heritage: Americans Fail a Basic Test on Their History and Institutions." Its findings are staggering, although not at all surprising to me. For starters, 71 percent of Americans surveyed failed the test, and the average score on it was 49 percent. As for some details, Williams tells us (some of the following information he gleaned from sources other than the survey):

Only 27 percent know the Bill of Rights expressly prohibits establishing an official religion for the United States. . . . 25 percent [of college seniors] did not know that Columbus landed in the Western Hemisphere before the year 1500; 42 percent could not place the Civil War in the correct half-century; and 31 percent thought Reconstruction came after World War II. . . . 50 percent of whites and more than 80 percent of blacks couldn't state in writing the argument made in a newspaper column; 56 percent could not calculate the right tip. . . . 98 percent could identify rap artist Snoop Dogg and Beavis and Butt-Head, but only 34 percent knew George Washington was the general at the battle of Yorktown.

With limited thinking abilities and knowledge of our heritage, we Americans set ourselves up as easy prey for charlatans, hustlers and quacks [i.e., that is, at least 80 percent of our politicians]. If we don't know the constitutional limits placed on Congress and the White House, politicians can do just about anything they wish to control our lives, from deciding what kind of light bulbs we can use to whether the government can take over our health care system or bailout failing businesses. We just think Congress can do anything upon which they can get a majority vote.

Without a doubt. To put it differently, how can we protect our rights as Americans if we don't understand civics and the Constitution and thus cannot know what those rights are? And how can we preserve our culture and traditions  and know what we're relinquishing by not doing so and the consequences of this sin of omission  if we don't know what they are? Rhetorical questions both.

Most distressingly, the civics survey found that almost 25 percent of us believe that Congress shares its foreign policy powers with the United Nations. If Americans believe such nonsense, can we expect them to vigorously oppose efforts to move us closer to one-world government? If people already believe that a certain degree of our sovereignty is gone, then all the internationalists need do is make it official; they will be able to relinquish precisely that degree of sovereignty without opposition from those ignorant citizens.

Yet, despite this abject ignorance, we still have get-out-the-dopes drives. What percent of the electorate should actually vote? Well, take the 71 percent that failed the civics test and subtract it from the total, and you'll have the answer.

Of course, though, fewer and fewer Americans can make that calculation all the time.

June 21, 2021
The truth: Biden is supposed to DENY HIMSELF Communion

May 12, 2021
How the left plans on putting boots on the ground to subdue Middle America

February 2, 2021
The fight that lies between status quo and secession