February 6, 2017
It's yet another example of Trump-era celebrity derangement. Comedienne and actress Alison Becker attacked me via Twitter recently, saying I "have absolutely no authority on inequality as a white, cis male."

Becker, a host on Fuse and VH1 who has also appeared on Law & Order: Criminal Intent, had some hostile intent Feb. 1 in tweeting that an article I wrote "is ignorant, offensive, and misses the point." She didn't indicate what piece raised her ire (I write a lot), but the only article of mine published that day was titled "The Equality Con: Why Income Gaps Don't Matter" and made the snowflake-melting assertion that inequality is "irrelevant."

Whatever upset little Alison, though, she perhaps feared her own increasing irrelevancy – it appears she deleted the tweet in question. But here it is: 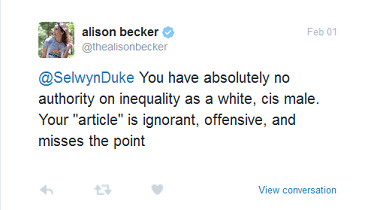 The irony of presenting oneself as a champion for equality while claiming that a whole group defined by race and sex has no business even talking about it apparently eluded Becker. But I don't blame her for nixing the tweet. Using the word "cis"? Really?

For the uninitiated, that's short for "cisgender," a silly term for someone who, shockingly, actually identifies as the sex he was born as. That's awfully presumptuous of Alison, though. How does she know I'm cis? Maybe I aim to supplant Milo Yiannopoulos as the new fabulous thing on college campuses.

Speaking of which, it's bad enough when college-age lunkheads use the term. Becker is 39 years old. Not only that, but when I mocked her for parroting the cis nonsense and, uh...impugned her intellect (okay, I called her an airhead), she responded with the following:

Actually, Alison, I'm getting people to notice you! It's interesting that this Mensa genius can't figure out that every term was made up at one point or another and that "cis" is new enough so that, for example, my Word program flags it as a misspelling. And this is a woman who calls President Trump a "stupid, ignorant, incompetent a**" on her Twitter page (so she's eloquent, too).

But given Becker's defensiveness about her intellect, if she herself ever decides to graduate from cis status, maybe she can play the following role in some future remake of The Godfather Part II.

Whatever the case, don't worry, Alison – you'll make it one of these days. If Sarah Silverman and Madonna find their happy place in a rubber room, next year's Women's March may need a featured shrieker.

October 22, 2020
Is this the real reason theyve been hidin Biden before the debate?

October 18, 2020
Is this another reason the FBI hid the Hunter Biden laptop?

October 9, 2020
Mike Pence got the debate buzz, but Obama is the real lord of the flies