Selwyn Duke
Whatfinger News: What the Drudge Report was meant to be

That's right, not the Drudge Report. That titan of news-aggregator traffic loses out because of an area in which it may be without peer: providing eyeballs for left-wing websites. More on that momentarily.

It's not hard to put your finger on what makes Whatfinger stand out: much more news, more conservative news and better views. Whatfinger is well organized and above-board, presenting headline news from various sources, categories for right-wing and left-wing outlets (with the latter far smaller!), and a prominent video section.

Most of Whatfingers' readers are ex-Drudge fans alienated from Drudge due to perceived establishment bias. And its web traffic levels reflect the anti-establishment wave. SimilarWeb shows Whatfinger's "numbers at 1.63M in the traditionally slow month of December while back in August they were pulling in about 400K hits. That's a pretty fast-paced build in the Sabermetrics of digital publishing," reports Liberty Nation.

Speaking of a liberty nation, Drudge just doesn't seem to be doing much to help us maintain that status. Let's first understand that, as they may teach in journalism school, everyone and every entity have a bias. Note that unlike a "prejudice," a bias doesn't have to be negative by definition. What really matters is whether you're biased in favor of the Truth – or a lie.

Unfortunately, too many of Drudge's sources have a very definite leftist bias; this is not mere perception, either. As Liberty Nation also informs, reporting on a 2015 study:


The Drudge Report is Numero Uno for referring traffic primarily to the rogue's gallery of narrative-driven left-wing media outlets like CNN, the New York Times, and The Washington Post. As a conservative who's now well versed in the power and money that traffic gives these outlets, one must ask[:] What's up with that? Why is such a robust website on the right driving so much traffic to the left? Don't these legacy properties [that] perform palace guard functions for the establishment already have enough influence and power to get there on their own? Do conservatives need to be giving them a helping hand? 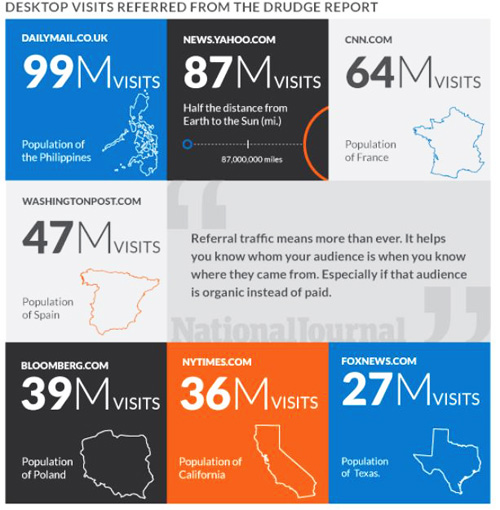 Note that traffic is a website's lifeblood, equating to influence and income. Feed the beast, and the beast grows. Wither on the vine the knights trying to slay the dragon, the knights get slain. We conservatives already have to deal with Twitter's shadowbanning, Facebook's censors and Google's blacklists. Et tu, Drudge?

Perhaps Drudge's failure is explained by O'Sullivan's First Law: "Any institution that is not explicitly right wing will become left wing over time." A more precise way of putting it, however, is that any institution not rooted to ageless principles will bend to the age's preferences.

Matt Drudge, the eponymous founder of the Drudge Report, has embraced the label "conservative." Sadly, however, he too often seems to be conserving the legacy media's power.

As to power, Drudge is still where it lies in the news-aggregator business. But if Drudge is the aging heavyweight champ, Whatfinger is the younger, more vibrant up-and-coming contender who only needs a title shot to hoist the belt. I hope it gets it, too, because the current media status quo has conservatives heading for a knockout.

June 21, 2021
The truth: Biden is supposed to DENY HIMSELF Communion

May 12, 2021
How the left plans on putting boots on the ground to subdue Middle America

February 2, 2021
The fight that lies between status quo and secession