Selwyn Duke
The truth: Biden is supposed to DENY HIMSELF Communion

Years ago, because my best friend had some Polish connections, I’d sometimes attend a “Polish” Catholic church in Brooklyn, New York. Attendance was great enough so that some parishioners had to participate in Mass on the sidewalk, and they, at the appointed times, would kneel down on the pavement as those inside the church knelt in their pews. But something else that occurred would’ve also been striking to too many American Catholics:

After the consecration, fully half the parish did not go up to receive Communion.

The reason why was that, unlike people such as Joe Biden and Ted Lieu, those parishioners take their faith seriously.

In the controversy over whether Joe Biden and other pro-prenatal infanticide politicians should be denied Communion — a story now that the United States Conference of Catholic Bishops is drafting a "teaching document" about the meaning of the sacrament — some Democrats are tacitly indicating that they consider church attendance a ploy and Communion a prop. They’re signaling that they have no respect for the Church — even as they imply that receiving Communion from it is an imperative.

Denying oneself Communion isn’t just a Polish thing. When a woman close to me who ceased following Church teaching decades ago occasionally attends Mass, she reflexively refrains from receiving Communion. She’s no theologian, but she knows the rules.

Here’s the reality: The Church’s teaching on Communion flows from what the Apostle Paul stated in 1 Cor. 11:26-29:

Whoever, therefore, eats the bread or drinks the cup of the Lord in an unworthy manner will be guilty of profaning the body and blood of the Lord. Let a man examine himself, and so eat of the bread and drink of the cup.

Paul then warns a line later:

Now, I’m not here to argue theology, but I will explain what the Church — Biden’s church — teaches. To wit: Being “worthy” to receive Communion doesn’t mean being perfect (only God is so). It does, however, mean not being in a state of mortal sin.

As opposed to “venial sin,” the mortal variety is sin grave enough to separate one from God. So the Church maintains that if you’ve descended into it, you must confess it, which involves contrition and a resolution to change your ways, before receiving Communion.

What constitutes mortal sin? Many trespasses do, but the significant point is that this is not a matter of opinion; it’s all well explained in Church documents. And among the mortal sins is refusal to assent intellectually to all definitive teaching.

Moreover and quite obviously, one definitive teaching is that direct abortion is never allowable — and supporting it is a mortal sin.

If the world’s Joe Bidens don’t like this, they should note what I heard a priest once say: “I’m in marketing, not design.”

In fact, pro-prenatal-infanticide politicians’ sin is all the worse because they don’t just support abortion privately, let’s say, with a secret vote on Election Day. They advocate it publicly and obstinately, leading others astray, and facilitate it with policy.

A prime example is Congressman Ted Lieu (D-Calif.), who proudly listed his deviation (and deviance) from Church teaching and then basically said “in your face!”: 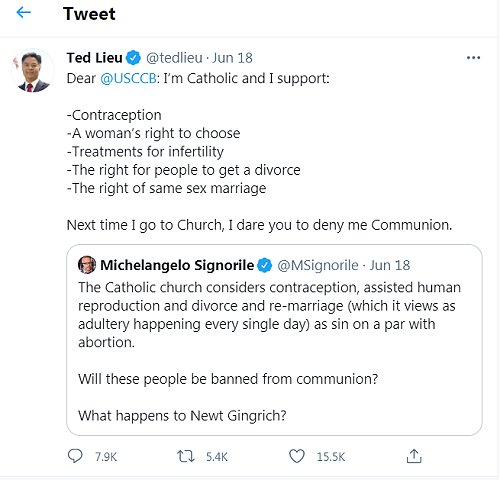 (Here’s a pro tip for Lieu: On judgment day, don’t tell God “I dare you to send me to Hell!” It’s widely rumored that He’s not swayed by political considerations.)

For the record, Signorile needs to bone up on his theology. The Church does not teach that all mortal sins are equally grave but that, as I believe St. Augustine put it, there’s a hierarchy of sin. And not many acts compare with murdering unborn babies.

I’ll lastly mention that these Democrats’ position is so irrational that no one taking his faith seriously could embrace it. After all, receiving Communion should only be important to you if you believe, as the Church teaches, that it actually is Christ’s body and blood (as opposed to just a symbol). Yet this must be accepted on faith based on the supposition that the Church is guided on such matters by the Holy Spirit. So it makes no sense to accept that claim on the Church’s word, but then deny what it teaches is necessary to receive Communion, which often involves truths more easily discernible via reason.

In other words, “I’ll believe you on the bread and wine becoming Jesus’ body and blood,” these would-be-theologian politicians tacitly proclaim, “but you can’t be right on the wrongness of killing unborn babies!”

If you’re sure the Church is so prone to teaching error, why believe one of the most striking things she has to say?

But then again, it would be silly to believe anything the world’s Bidens and Lieus have to say. Their lack of seriousness and dishonesty (intellectual dishonesty in the least) about their faith just reflects their dishonesty in politics. They worship power.

Unlike the Poles and the woman I mentioned earlier, these left-wing politicians don’t even have the respect to abide by the rules of an institution to which they belong voluntarily. So the truth is that contrary to billing, Biden isn’t just not a devout Catholic — he’s not even a good non-devout Catholic.

January 2, 2023
Remembering when gun control was at least remotely rational

December 13, 2022
Seared souls: How we abuse our children

November 29, 2022
The new voting system that gave Dems a GOP House seat is dangerous. Here’s why.