While the publisher of The Message advertised it as a "translation from the original languages "that "accurately communicates the original Hebrew and Greek" and brings out "the subtleties and nuances of the Hebrew and Greek languages," it is anything but. It is a free-wheeling paraphrase of Scripture in which Peterson freely and frequently inserts his own interpretation of the text and glosses over any inconvenient truths he finds.

Well over 10 million copies of The Message have been sold, and it frequently appears on top five lists of annual sales of the Bible. It has been endorsed by many evangelical luminaries.

But caveats are in order. For instance, on the controversial subject of homosexuality, compare a literal translation of passages from 1 Corinthians 6 and 1 Timothy 1 with The Message: 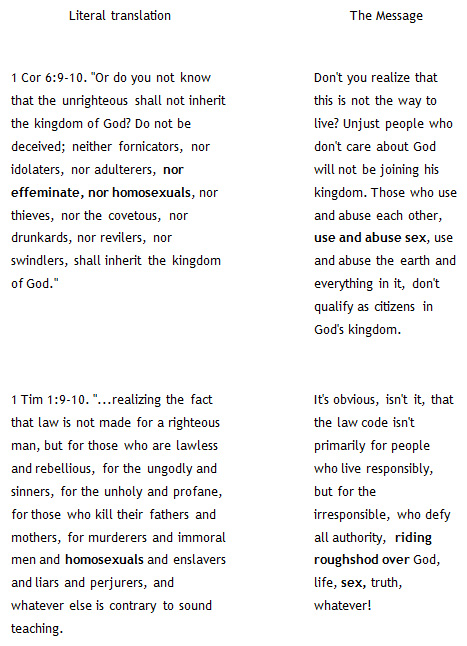 You would not know from Peterson's paraphrase that homosexuality was even specifically addressed in either of these passages.

The word translated "effeminate" in the literal translation of 1 Corinthians 6:10 above literally means "soft" and describes the homosexual who is on the receiving end of the sexual act, while the word "homosexual" refers to the active and insertive participant. Thus Paul clearly and unambiguously rejects the normalization of the entire act of homosexual sex. In Timothy, he makes it clear that prohibiting sex between members of the same gender is a proper matter of the law, just as prohibiting the slave trade is.

The original New Testament version of the The Message was published in 1993, so it appears, to this observer at least, that Rev. Peterson has been compromised on the subject of homosexuality for a long time.

Thus it comes as no surprise that in a recent interview with the Religion News Service, Peterson readily admitted that he would happily perform a same-sex wedding if asked:

RNS: If you were pastoring today and a gay couple in your church who were Christians of good faith asked you to perform their same-sex wedding ceremony, is that something you would do?

Earlier in that same interview he spoke proudly of his church hiring a homosexual to serve as its worship leader, and praised his church for being so accepting:


One of the young people that had grown up under my pastorship, he was a high school teacher and a musician. When he found out about the opening, he showed up in church one day and stood up and said, "I'd like to apply for the job of music director here, and I'm gay." We didn't have any gay people in the whole congregation. Well, some of them weren't openly gay. But I was so pleased with the congregation. Nobody made any questions about it. And he was a really good musician.


When the evangelical world quite rightly erupted, he immediately tried to backtrack. "On further reflection and prayer, I would like to retract that," he said in a statement. and virtually accused the interviewer of ambushing him, putting him on the spot, and catching him off guard. But his response to the interviewer's question shows no hesitation, no sense of coercion, no sense of being pressured into saying something against his will.

In a follow-up piece, the journalist – Jonathan Merritt – pointed out that Peterson had had a full week to clarify his comments before the interview was published and did not do so: "...[I]t is also important to note that in the week prior to the publication, there was no attempt to clarify or change his answer to these questions."

It, in fact, was only when LifeWay, the largest chain of Christian bookstores in the country, threatened to pull his products from their shelves and their website that he scrambled to undo the damage. LifeWay carries 135 titles with Peterson's name on them, and has 2.7 million customers annually. Peterson has his final book coming out soon, and although we cannot read his mind, it's impossible that he did not see dollars disappearing in a puff of smoke.

It looks, to an objective observer, that Peterson's sudden reversal is not, to put it bluntly, a matter of conviction but of greed. Regardless, it is a sad epitaph for his career that a man of his stature has been forced to resort to such groveling. He has gone to ground and is no longer doing interviews or even accepting public speaking engagements. We may have heard the last of Eugene Peterson.

February 14, 2020
In praise of Bloomberg's stop and frisk

February 13, 2020
The biblical case for a male president